Senior Moderator
Blogs Author
Hard to tell, but the 381 tank (right photo) does look bigger. Something like 55 gallons. 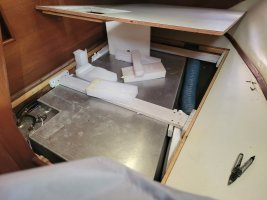 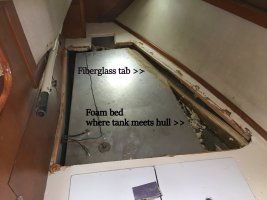 Dave,
If you do decide to go after that strut, the attached picture shows what I've found digging into our 1986 35-3. A slight wobble was detected by the surveyor and we have to fix it for insurance. The wobble was less than .080" but there was a little water weeping out. I used an endoscope camera to look under the water heater mount and it looks dry and intact so I think the weepage was infiltrated salt water. To avoid tearing the water heater out, I'm going to try to do the fix entirely from the bottom. (fingers crossed)
I ground and chiseled the glass away. Then I ground slots in the screws so I could back them out. I was able to lower them .250'-.300" before I met any significant resistance. Based on another owner's sketch from his '87 E34, I'm expecting we will not find bolt heads. I need to remove the shaft before I can go further, though. What really surprised me was how much non-structural material there was around the mount, the lighter material around the strut plate. It's the consistency of old window glazing putty. Small wonder it started to wobble over 35 years.
I wonder if it's fair to assume the strut on an E35 and E38 from the same year would be built the same?
Anyway, FWIW,
Jeff

Senior Moderator
Blogs Author
This has segued into "strut territory", so a link or two may help.

I thought I'd share this weeks maintenance on Loki. I contracted a local mobile marine mechanical group (very reputable) to replace the shaft seal on Loki. The seal replacement uncovered issues with the shaft coupling keyway, which lead to pulling the shaft, which uncovered wobble in the...

Bracing myself for a strut job

Makana splashed last Friday after a week in the yard. Mostly routine stuff - bottom job, new dripless, etc. (in a masterstroke of bad planning, that meant she was out of the water over Memorial Day weekend, which turned out to be absolutely gorgeous around here. Arrghhh) The plan was to also...

Hi, As in so many of our 1980s boats, my 1984 E30+ aluminum diesel tank is beginning to leak/weep/sweat at the very front end bottom middle V, not enough to drip but too much to ignore. I plan to empty the fuel, cut an inspection port as per videos and posts on this site, clean with acetone...