A brief introduction, I'm the new owner of the 32-3 #679, formerly known in Puget Sound as Raconteur, soon to be renamed Sapphire. This boat was depicted in the 2012 Cruising world review, I know because I can recognize some gelcoat repair work on the topsides, which will be a topic for another day! This is my first somewhat modern sailboat, my others were older CCA full keel types. So far I'm very much enjoying the boat, it's layout, and upwind capabilities. Close quarter maneuvering is also something new and pleasant, and all the modern electronics have taken about zero time to seem essential, especially autopilot for single handing.

Also just need to say, I'm very appreciative of this organization, it is a fantastic resource. A huge thanks to any and all who maintain it. I've seen other similar resources for other boats fade over time, hope this one never does!

I thought I'd share a little discovery after my efforts to dry out the bilge almost succeeded. At my first haul out. I spent some time in the boat yard, checking various areas of potential seawater leaking, and the only thing I discovered that was an obvious candidate was a slow leak from the speed sensor, which I could have caused by not making it tight enough after removing the thing to clean and paint the paddle wheel. The o-rings looked fine, but I assumed they would seal just being in the tube and not also need to be cranked down very tight (by hand), but doing so with gusto stopped the leak. After that, the bilge was staying bone dry, even after repeated checks of all below the water line through hulls and hoses. So far so good. Top up the freshly cleaned fuel tank and head the 35 miles south to home.

Heading south from Port Townsend to Bainbridge Island under power, due to a direct headwind and a long day ahead, I started to find water coming in from the aft sump right under the stair. That one was always dry before. I immediately checked all the aft seacocks - nothing. Then I pulled the side cover alongside the quarter berth to check the dripless shaft seal. Also running bone dry. Then I found the culprit, the rudder tube! I had actually noticed on this site that Jerry, a former owner of this same boat had "cured" his leak in this spot on this same boat by pumping it full of grease. He installed a new zerc on the rudder tube, since the original one was rusted away. The Ericson manual says to grease this periodically too. It was on my list to do during haul out, but my schedule forced a deferral, and I knew I could do it in the water, so I blew it off. What perplexed me was how much water was coming in considering the tube top is quite a few inches above the water line and I was motoring in calm seas. 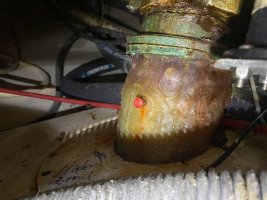 Dribbling down the rudder tube at 6.8 knots under power in calm seas.

What I discovered after some pondering and sponging of water from the bilge, at about a gallon per hour, was this: when motoring at hull speed, the waterline AFT rises by about TEN INCHES, since the quarter wave rises up to meet the lower lip of the transom, allowing things which are normally ABOVE the water line, such as all those drain fittings between the boot strip and the transom, to be BELOW the water line continuously! Not just intermittently when a following wave splashes up, but all the time. So that explained the water sloshing up past the rudder stuffing material that was way overdue for renewal. And it also suggests that way more scrutiny needs to be placed on those stern area drains too, though they sure are hard to get an eyeball on from inside!

In the case of my boat's previous owner, the reason for not getting into the rudder stuffing box was the steering quadrant sits right on top of it. But there is plenty of room above on the rudder shaft to shift the quadrant up and access the stuffing, so that's what I'll be doing. In addition I'll add a new zerc, since the first two are now rusted beyond use. I'll then pump in the thickest waterproof grease I can find, after I replace the packing with some modern Teflon stuff. I see only a single 316 stainless steel Zerc fitting in the McMasters catalog, but that's what I'll get since these seem to rust really fast. Well, every 15 years so maybe not that fast, but hey.

Here's a couple more pics for the archives: 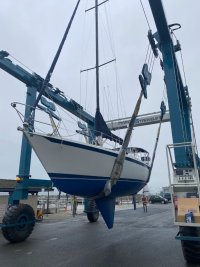 Ready to splash. Where will it leak? - Let's find out! 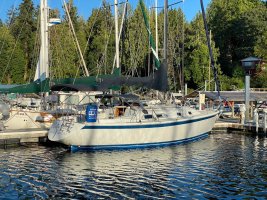 Back from the boatyard, 35 miles each way more or less. Nice to see actual reflections in the topsides. The original gelcoat, excepting a non matching repair, polished up to look just like new. Very impressive. In this picture the lower lip of the transom sits about a foot above the water. but at speed, the water was only about 2 inches below that lip, so all those drains and the exhaust outlet are continuously submerged at speed. There are about 4 on each side. I will no longer be casual about them because they are above the waterline. Just going to treat them like below the water line fittings, which they become once the boat gets moving!

The packing gland there is awkward to access, and not designed to be watertight (like a stuffing box). It's the grease that makes the seal when the stern squats. 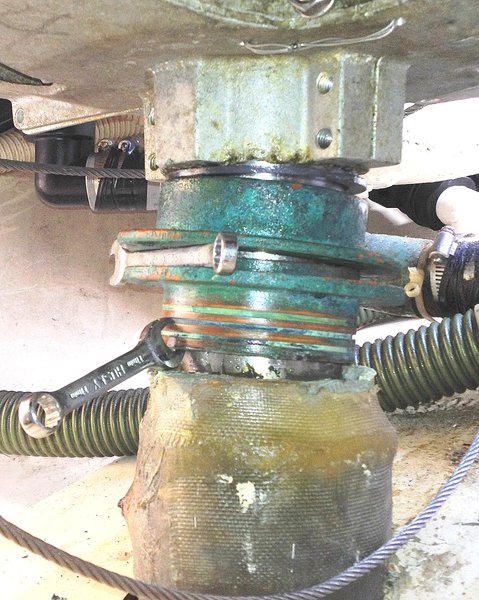 Symptom: Water in the bilge after returning to slip. Bilge is normally dry. Cause: Rudder packing gland/rudder tube/frozen lower grease fitting. There should not be much water in the bilge of a fiberglass boat. I figure that with a dripless...

The packing gland there is awkward to access, and not designed to be watertight (like a stuffing box). It's the grease that makes the seal when the stern squats.

Symptom: Water in the bilge after returning to slip. Bilge is normally dry. Cause: Rudder packing gland/rudder tube/frozen lower grease fitting. There should not be much water in the bilge of a fiberglass boat. I figure that with a dripless...

Thanks, Christian, that’s a terrific right up. I’ll give the zerk a try. The one in my picture with the red plastic cap is the replacement that was installed by a previous owner in about 2007, so perhaps it will still function. Epoxy in a new one also a smart idea, though I worry a bit about adhesion in greasy fiberglass. I also see that my quadrant sits almost right on top of the seal fitting, and I wonder if perhaps the good folks at Ericson intended it to be a fail safe to prevent the lifting that you experienced when your 5200 let go? For any boats that are not so tightly arranged, a spacer between rudder gland and steering quadrant could provide the same protection.

A former boat of mine, a Cheoy Lee Offshore 30 had a traditional stuffing box located so deep in a very narrow keel that it was nearly inaccessible by humans. It was equipped with a copper tube that lead right up to the top of the lazarrette, and was topped with a grease cap the size of a garden hose fitting with very fine threads. It seemed to be designed to be packed with about a tablespoon of grease, and then one could just give the cap a few turns every now and then to push a little down into the stuffing box, which I did. It never really leaked, and likely preserved the packing material which was no doubt original from 1967. Since the Ericson seems to need a lot of grease, a similar arrangement with braided stainless hose and a zerk at the top would be an easy way to top up the grease routinely. But first things first, I’ll try the most recent zerk for functionality and load it up, and see if that works for the summer. The season is short up here, so sailing time counts! The long dark winter will do for crawling around with tools in tight places…

Senior Moderator
Blogs Author
"What Christian said" !
Also, if all those OEM thruhulls above the aft waterline have not been replaced with new Marelon or Bronze, please do it soon. This can be done at the slip if need be. I replaced all of ours many years ago, and a friend replaced all them on his 32-3.
Links:
https://ericsonyachts.org/ie/ubs/transom-thruhulls-back-in.872/

Hello All, I tore into my '83 E38 in preparation for spring yesterday. I didn't care for the looks of several seacocks so I pulled them all today. Here is what I found: 7 total seacocks, ball valves/thru-hulls really, not the flanged seacock. 4 of them under the starboard/aft section of...

And the thread about the actual fitting replacement: https://ericsonyachts.org/ie/threads/thru-hulls-and-seacocks-on-a-e38.2992/

Puget sailor said:
It was equipped with a copper tube that lead right up to the top of the lazarrette, and was topped with a grease cap the size of a garden hose fitting with very fine threads. It seemed to be designed to be packed with about a tablespoon of grease, and then one could just give the cap a few turns every now and then to push a little down into the stuffing box, which I did. It never really leaked, and likely preserved the packing material which was no doubt original from 1967.
Click to expand...

That is kind of crazy, I had very recently seen that setup on some youtube videos of old (like 1930's) oil engines.

Just a quick follow up to my original post for the archives. I went with Cristian’s advice and packed the tube with grease using an existing functional zerc. I used waterproof trailer wheel bearing grease. Filled it until it was emerging all over at the top, and removed the excess. It leaks not a drop at any speed or angle of heel now. Will make this an annual spring maintenance item. Nice when something is easy to resolve!
You must log in or register to reply here.
Share:
Facebook Twitter Reddit Pinterest Tumblr WhatsApp Email Share Link
Top