Not positioning, but location. My sheet block is located on deck gunwale track just outside the lifelines. I noticed on some videos as well as other local sailboats that have tracks in both locations...their block location is the cabin perimeter track, which puts the block inside the lifelines. Thinking about moving my Genoa sheet block from gunwale to cabin perimeter track. Wondering about least standing rigging interference between the two. Your thoughts...? E35.
Last edited: Apr 3, 2020

Senior Moderator
Blogs Author
Quite a bit of related "where to sheet it" information in some prior threads. Our boat came with short forward tracks inside the shroud base, but perhaps others could add them. (?)

O-34: Getting the Overlap Juuuust Right

Getting more serious about a new genny to replace the '95 dacron 135% furler. Had a chat with the local North rep yesterday. He can quote price but could not comment on just how much % would be minimally enough for my boat. The good news is that our boat is very easily driven. My goal is a...

Self Tacking Jibs, anyone?

One of the guys at our YC converted his smaller RF jib to a self tacking 95% jib last year. He put a wire-cable traveler on his housetop just in front of the mast. The jib is still a furler. He single-hands his boat, a Catalina 30, a lot more than he ever did before. So far he is delighted...

Loren...great reading...appreciate the direction. I have the time due to virus home rule, to digest many ideas. Still a long way from savvy, but headed in the right direction, thanks to the good folks on this forum.

You didn't specify your current jib size which does impact the sheeting angle as detailed in the links Loren provided.

Generally speaking, you would use a sheet block on the inboard track to get the best sheeting angle upwind on our Ericsons. A #3 jib (95 - 105%) where the leech is forward of the spreaders, could use a track on the cabin even further inboard and sheets run inboard of the shrouds. Or you could use inhaulers to pull the clue inboard. A 120 - 155% would use the inboard (cabin perimeter) track. The genoa leech hitting the spreader tip limits the degree you can sheet in. A 155% has the max draft at the spreaders so the sheeting angle is actually better than the 120 - 140% genoas which can't be pulled in as far before the leech hits the spreader tip.

For reaching angles, the more you release the sheet from the inboard location to adjust for the wind angle, the less you are pulling DOWN on the jib leech causing the jib to twist at the head and spill wind and lose power. Therefore, you move the sheeting block outboard to the rail track and forward to maximize the pull DOWN to reduce twist. You can use the lazy sheet to take the load at the rail on a single tack (both sheets on same side temporarily) or swap sheets with the new lazy sheet running to the other rail if you are going to reach on the other tack or to inboard if you are sailing closer to the wind on the other tack.

Here' a good picture of my 150 flying without the main. The sail is sheeted near the aft end of the inboard track almost to the cockpit. You can see that the jib leech is almost hitting the top spreader tip, which is limiting how far the sheet can be trimmed. For your 120, you would move the sheeting point forward on the track and sheet in until your leech is close to the spreader tip. 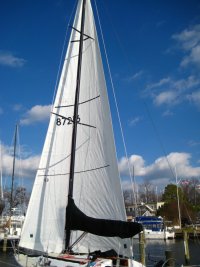 For your 95, you can add inhaulers to pull the clew of the 95 inboard to about the cabin top handrail while using a sheeting point at the front end of the inboard track up by the shrouds. This will avoid adding new inboard jib tracks on the cabintop just for the 95. My inhaulers pull the clew inboard before the sheet runs down to the inboard track with the car all the way forward right at the shrouds. The jib sheets run inside the shrouds. In the picture below, I was prototyping how to arrange the blocks and line runs for the inhaulers to avoid as much drilling of new holes as possible, but you can see how the white/black flecks line with floating block is pulling the blue jib sheet way inboard. 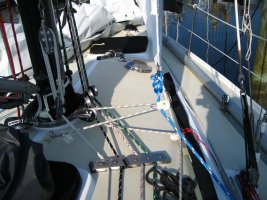 Mark: Exactly the answer I was looking for....your inhauler is ingenious. Can't wait until I am free to leave home and head for the marina due to virus epidemic, like most of us....gotta experiment and reminds me to install new spreader tips to protect against accidentally sheeting too close. Your photos are terrific...makes it easy to visualize your description. I also see you installed a roller at the stanchion to protect the foresail. Just noticed...where is your lazy jib sheet? Thank you!
Last edited: Apr 6, 2020

I found another picture with a better view of the final inhauler configuration, the forward end of the inboard jib track and my new line organizer. I wound up not needing to drill any holes for the final setup. My inhaulers are removable to avoid UV damage to the line and the rubber protector surrounding the friction ring that rides on the jib sheet. My inhauler attaches to a fitting on my mid-hatch with a snap shackle and runs out to a friction ring floating on the jib sheet and then back to a block on the mast base ring, then to the cabintop organizer and aft to a clutch and a winch. You will need a winch to move the sheet inboard under load. The jib sheet runs inboard of the shrouds to the friction ring just aft of the mast (my #3 is 105%) then down to the jib car set near the shrouds on the inboard track and back to the primary winches. For a 95% you may need to move the end attachment point forward of the mast (vs my attachment on the mid-hatch) to get the sheeting point correct. 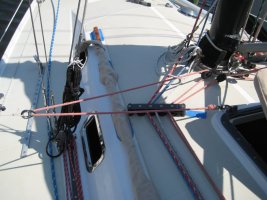 "For a 95% you may need to move the end attachment point forward of the mast (vs my attachment on the mid-hatch) to get the sheeting point correct."
That will take some ingenuity! Trying to look at my photos for attachment points...long distance from home; however, I have an idea that may? work. Will post when I am at the boat next, hopefully sooner than later. Mark, you are very detail oriented. Did you notice that being able to winch in the foresail more this way, gives you an extra knot or two and also does it close the angle of attack windward at any perceptible degree? Did you notice any additional torque stress on the clew?

A small padeye on the centerline could serve as the endpoint for both port and stbd inhaulers for sails in the 95 - 80% range. I was thinking of doing this for a future #4 jib. I should be able to use the existing (#3) mast blocks and line for both #3 and #4.
My sailmaker at Quantum suggested these inhaulers as a way to improve the low wind performance of my #3 since I go from 105% jib to 150% and don't plan to add a sail in between. They use them on the Farr 40 he races on (which only uses non-overlapping jibs). You won't notice a huge speed increase but you will get good upwind sailing angles. If you do the math for a #3 jib sheeting angle of 8 degrees, on my boat with a huge J dimension of 14.5 feet, the jib clew needs to be only 2 feet from the centerline to be sheeted properly ('J' x Tan 8 = dist off centerline). For a smaller boat with a shorter J, the jib needs to be even closer to the centerline.
The sail will fly properly and develop power to drive the boat at a narrow angle upwind if sheeted in but the boat must also have efficient foils (keel and rudder) to actually sail upwind at a narrow angle or the foils will stall and the boat will slide sideways with lots of leeway and no progress upwind.
The jib doesn't care how the clew is held in position to produce the desired shape. The inhauler can locate the clew inboard to promote curving the foot to power up the sail while the actual sheet is eased. My inhaulers are 3/8 inch NE Rope Endurabraid which are low stretch dyneema.

I had to look up the etymology: "Barber Hauler: A line attached to the jib or jib sheet, used to adjust the angle of sheeting by pulling the sheet toward the centerline of the boat. ... Most often used to bring the sheeting angle inboard in light airs. Named after Californian racers Manning and Merrit Barber. "
M

markvone said:
he jib doesn't care how the clew is held in position to produce the desired shape. The inhauler can locate the clew inboard to promote curving the foot to power up the sail while the actual sheet is eased.
Click to expand...

I have been thinking about this for the last few days. Thanks for sharing the photos!

The in-hauler obviously helps to reduce the sail's sheeting angle, but does it also reduce the effect of car position on the leech tension/sail twist?

The inhauler only pulls inboard (with the inhauler floating on the jib sheet) so it has very little effect on the downward component which is controlled by the forward-aft position of the jib car. The picture below is a side view of the lower inhauler picture in post #5 and shows the sheet is a direct pull to the jib car in the fwd-aft direction. My inboard jib track extends forward to the shrouds and my #3 jib (105%) extends slightly aft of the mast, so my jib car is not all the way forward on the track for my sail. (You may need to open the picture below in a photo software and zoom it to see details.) My sails are cut low to the deck (low clew) which requires a more forward sheeting point and my boat has the track locations to support this. A sail with a higher clew uses a farther back sheeting point which may avoid adding track forward. It also twists less when the sheet is eased compared to a tall, thin (blade) jib. 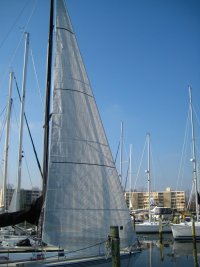 I really appreciate your input and photos as we were playing with an in-hauler toward the end of last year. Our goal was to improve the sheeting angles in spite of the baby stays and without having to drill any holes for additional car tracks. See photo from our 'proof of concept' experiment. Please try to ignore sail trim, the fuzzy red sheets, gold dock lines and big box store rigging. : )

In use, how much does the lead / relative position of the in-hauler move about? Up and down? Forward and backward?

Do you think the single 'floating' in-hauler lessens or reduces the effect of moving the car forward in light air? Enough to matter?

Thanks for helping me work through this....without being able to see it on the water! 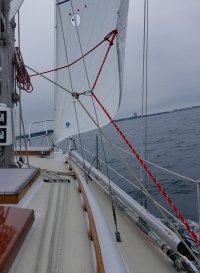 Mark David-
You are on the right track. This is our solution which is just putting on an additional sheet that runs through a fairlead on a pennant attached to our traveler. We can balance the clew position between the two sheets. That balance also allows us to use the car to control the leech tension.

That blue spare sheet is our utility line with a snapshackle on it. It gets used all around the boat for different things, so not just a dedicated thing.

While not technically a barber hauler, we call ours the Pedro hauler after our sailmaker who rigged it up one day. Pretty sure Pedro sailed against Christian back in his Soling days. Pedro sailed under the Argentina flag though.