Blogs Author
One of the items I was dreading the most on my engine compartment cleanup list was to replace the bilge hoses. I put it off as long as I could, but this weekend was the time it had to go in. I chose Trident's 147 Vac XHD Bilge hose for the cockpit drain since it was below the water line. It's usually best to purchase in larger quantities or complete units, so I ordered a 50' box thinking it would work for the manual bilge hose as well. Trident 147 is a stiff hose that has a lot of memory. It worked well for cockpit drains, but the manual bilge run requires snaking it through conduits and regions of the TAFG not typically accessible whiteout considerable deconstruction.

The first plan was to install a 1.5" to 1.5" hose barb connector in the old and new hose and use the hold hose to guide the new one into place. Seemed like an easy plan, but both the local chandleries were out of stock.

The next idea was to pull the old hose out in sections and use an electrical fish rod to pull the new hose in. The old hose came out easily enough with one ominous hint to one of the problems I would later figure out, it was covered in thick oily muck. In an attempt to clean the conduit out, I snaked a few paper towels through half a dozen times. The last one was marginally cleaner than the first and it was getting late, so I decided it was good enough.

The first item to figure out was how to attach a pull line. At work, we use pulling socks to pull cables through conduits. They're everywhere, hanging from every line truck and stocked in the tool room, but in the boat yard or hardware stores open on the weekend, no-one had ever heard of them. Time to summoned my inner MacGyver, aka sheer desperation to get this done. There was an old 1 1/2 elbow and a screw sitting on the table I thought I could jury rig into a pulling device. With some tap on the outside to transition from the pulling wire to the hose I thought it would do the trick. 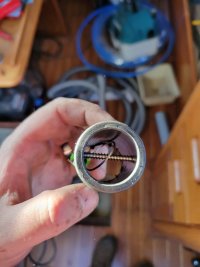 Unfortunately, the only tape I could find was painters tape. It quickly tore and exposed the edge of the hose which caught on an edge of one of the conduits below the cabin sole. Instead of following the path of the pulling rod, the conduit turned and coiled up in the cavity under the sole directly in front of the engine. When I pulled it out, it was caked in the muck I had found before. I'm now thinking all the muck I found under the fiberglass pan below the stuffing box had been draining to this area waiting for someone to find. It has to be completely packed in there to account for what was on the end of the hose. That's going to be a long day when I cut an access hole or replace the sole.

The pulling attachment seemed to be working well, but the tape transition wasn't doing a good job. I needed something stiffer and more abrasion resistant than the tape to rub against the edge of the conduit and guide the hose into the correct path. The only think I could think of was hose itself, then it hit me, just taper the hose! heating up the hose allowed me to burry the end of the elbow deeper into the end. With the remaining 4 inches, I cut four relief triangles and tapered it down to the pulling line. 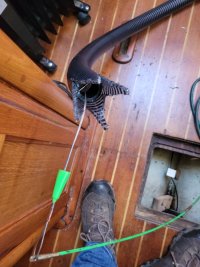 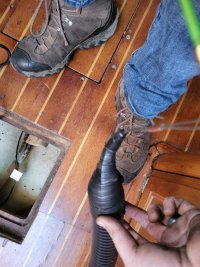 This solution was far from easy, but it was doable. after 3 hours two broken, line fishing rods, and being covered in the mystery sludge it was finally in place. 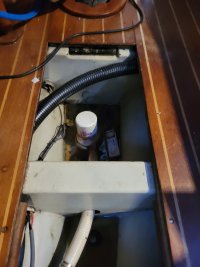 Clever. It's the "sandworm of Dune" technique.

trickdhat said:
The old hose came out easily enough with one ominous hint to one of the problems I would later figure out, it was covered in thick oily muck.
Click to expand...

Great ideas! Replacing the old hose is on my short list; I even have the same hose (147) on-hand. As a former cable-jockey, I contemplated a few ideas for accomplishing this same task that involved pull lines. Accounting for the obvious difference in design between the E35 and E26, did you encounter places where the old bilge pump hose was "trapped" between the two layers? If so, how did you get it untrapped? I've thought about abandoning it, but that drives me nuts to think about.

Here's what I'm referring to; this is just forward of the engine looking forward to the first bilge compartment: 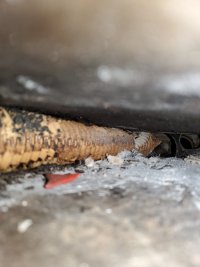 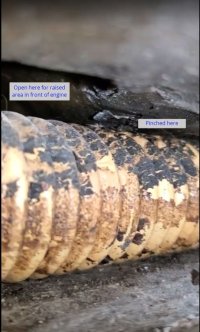 Aft-facing; the wall to the left is where it passes through and runs under quarter-berth to egress: 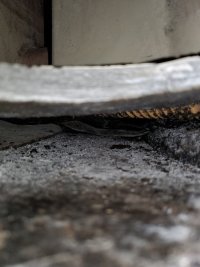 Thoughts worth the paper they are printed on...

Air power: Deflate a small bumper, push it in the gap next to the pinched hose, and then carefully inflate it to flex the floor and release the hose.

Hydraulic power: Same idea but probably better chance of success... Use a "Hydraulic Jack Body Frame Repair Kit Auto Shop Tool Lift Ram" with the pry-apart wedge to flex the floor and release the hose. Also available via Amazon and at Harbor Freight (costs more and you get less!).

Blogs Author
My 25+ didn't have the TAFG, so there was just the hull and the pan and there was just enough room between the two where I could install a 1-1/8" bilge hose. It actually didn't come with a bilge pump when I bought it, so where was no hose to trap. The 35-3 has conduits passing between sections of the TAFG, so there wasn't any hoses pinched between two laminates. It looks like your hose is already crushed so you might be able to pull from both sides and break it free (mine crumbled when I pulled a section out).

Jerry VB said:
Air power: Deflate a small bumper, push it in the gap next to the pinched hose, and then carefully inflate it to flex the floor and release the hose.
Click to expand...

Good thoughts, actually. I wonder if one of those inflatable wedges would do the job. I would use one of those for other things and it would fit better in this VERY small space. 300lbs of pressure should be enough to flex the floor to wiggle the hose out.


trickdhat said:
It looks like your hose is already crushed so you might be able to pull from both sides and break it free (mine crumbled when I pulled a section out).
Click to expand...

Also a possibility - it's definitely brittle. The trick is getting the right tool in there that is both flexible enough to maneuver through the 4" hole I drilled and in the 1 1/2" high space in between and is strong enough to exert force on the hose to pull it out.