If you have a copper fuel line, even if you think it's good, consider replacing it.

I have an Olson 34 with a Yanmar 3GM30F. I have been struggling with air ingestion issues since delivering the boat to Portland Oregon a couple months ago (410 NM journey). It was intermittent- but would result in the motor stalling. While diagnosing I discovered several minor issues in the fuel system and addressed them such as a leaking tank weld, a water- not fuel rated shut off valve at the tank that was leaking (if the handle is red, replace it- should be YELLOW) and few other niggly bits. After replacing everything else including the copper crush washers on the banjo fittings, I replaced the fuel line. Where I could see it- it was heavily oxidized.

I used a fluid extractor to put vacuum on the copper fuel line. It wouldn't hold vacuum... clearly leaking.

At 32 years, it's not surprising. When I removed it I found hairline cracks and witness marks indicating the tubing had been leaking fuel out and likely air in for a LONG time. I replaced with 1/4" Trident Marine fuel hose, type A1-15 (the stuff ABYC requires) and put small service loops behind the engine and near the tank so I have extra tubing if I need to cut ends off or bypass the Racor, etc..

Senior Moderator
Blogs Author
Just in case it's helpful, here is the link to our fuel filter upgrade. 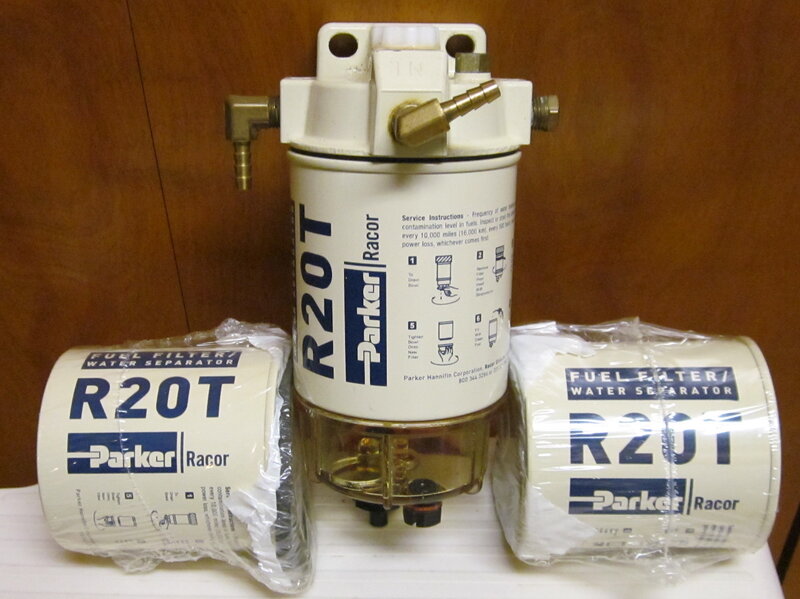 As a part of the engine replacement project, we decided to move the Racor and electric lift pump out of the engine bay/compartment. Current ABYC "rules" seem to demand a metal bowl under the clear filter bowl, and this seems to defeat its purpose...

I did the same last winter and also highly recommend it if you are unsure of the age of the fuel lines.
I got tired chasing ghost fuel air leaks for two seasons and replaced the entire fuel lines, copper lines, upgraded hose connectors with solid bands from the tank to the fuel injector pump and upgraded to a new fuel filter assembly to a 500 series. And reorganize the fuel delivery for straighter and more organized lines and better access to the filters. Also upgraded my lines (5/16") to Coast Guard approved lines. Once I removed the fuel hoses, I was surprised that a hose that looked old but okay, once you had it in your hands and slightly bent it, you could see hairline cracks. If they didn't leak or suck in air now, they would have in the near future.
You must log in or register to reply here.
Share:
Facebook Twitter Reddit Pinterest Tumblr WhatsApp Email Share Link
Top