Well I put the order in before Christmas and this weekend, I was super excited to finally take delivery of Delightful's first-ever spinnaker.. an A1.5 light runner from North Sails.

I originally planned to get this from ispinnakers.com as I have a friend who got a nice one via there, and the price is right...but the more I thought about it, the more I wanted to work with an actual loft on this. I've sailed with Jack Christiansen, the North rep here in Seattle, and found him to be knowledgeable and attentive, so after shopping around for some quotes I decided to go with them for the sail.

I goofed around for a while in Microsoft Paint moving colors around, and stumbled upon the idea of making it look like a watermelon. Some early ideas were better than others...which were bad, in retrospect. 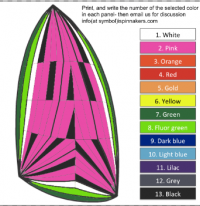 I was fortunate that Jack thought the idea was great and offered to help ink some watermelon seeds on after-hours one day, so their proposal looked like this: 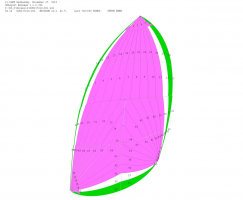 I pulled the trigger and waited, and waited. Eventually I got a text saying the chute arrived, and when was I free to do the seeds? 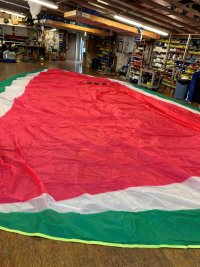 The inking process was fun -- I designed a basic seed shape and traced it w/ a sharpie on a big roll of Mylar at the North loft, and then we exacto-knifed the seed out. The seed itself could be used for layout and design, and the "negative" hole where the seed was is what we used for inking over. We made three blank seeds and Jack gave me a roller and some ink, and we got to work.

Long story short, it turned out great. The next day was our sunday Goosebumps beer can race in the middle of Lake Union... the wind was blowing 0-2kts all day from every direction possible, but we did manage to get a nice puff for just long enough to get the chute flying. And it looks great!! We got a ton of compliments and I couldn't be happier with it. 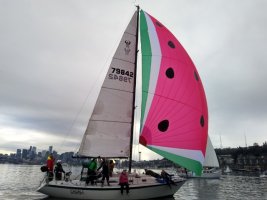 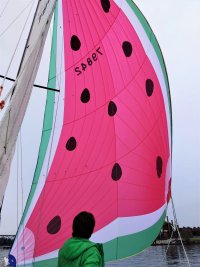 For tech specs / nerdery, it's made of AirX 600-700 cloth, cut in a "minus" construction, meaning the luff is the heavier cloth while the rest of the sail is the lighter cloth. It should carry me to 12 knots apparent from a little below a beam reach to almost DDW. I noticed it's got a pretty deep shoulder, which I imagine is what makes it the "runner" cut instead of the "reacher" cut. I currently only have a block on the tack attached to the bolt that normally keeps the anchor in place, but I'd like to measure and install a bail to mount it on instead. One upside of the current setup is it's easy to stash my anchor in the anchor locker...one less sharp thing on deck to tear the chute.

My foredeck and trimmers are all as inexperienced as I am with a spinnaker, so we all have a lot to learn, but it was good practice hoisting it, gybing, dousing it.... fortunately my vertical windlass did not shred anything. We only attempted deck douses, though... the Lewmar forward hatch seems maybe a little small for a hatch douse, but I'm sure we'll try it.

As far as I'm aware the boat has never flown a chute before, so it's exciting to be "leveling up" in this way, and I'm stoked to be against the more serious people on the racecourse now, instead of just being in the non-flying sails fleet.
Last edited: Jan 21, 2020

way over trimmed! And I would recommend moving the car as far back on the track as possible... Also, make sure you can adjust the tack line; closer to the deck the closer to the wind. We fly our tack above the bow pulpit going down wind, 120 degrees or greater

and have fun... we pass a lot of boats when we put ours up

Blogs Author
Looks great!
I was just thinking that with these light winter winds blowing off the dock and empty slips on either side, it might be time to practice the spinnaker and associated spaghetti. While firmly tied up. It's just so... damp!
er... I didn't even know spinnakers were supposed to have tell-tales! D'Oh!

toddster said:
er... I didn't even know spinnakers were supposed to have tell-tales! D'Oh!
Click to expand...

Honestly I'm not sure they are. I don't really understand how they'd work once you got below a broad reach? I asked the same question of the North rep, who told me they can give you a little bit of early feedback. I've never seen another chute with telltales.

Blogs Author
Well if nobody else knows, you are free to make up a good story about them...

That is an awesome looking chute!!

Geoff W. said:
Honestly I'm not sure they are. I don't really understand how they'd work once you got below a broad reach? I asked the same question of the North rep, who told me they can give you a little bit of early feedback. I've never seen another chute with telltales.
Click to expand...

Simplest explanation is that tell-tales indicate "flow" of air across the surface. Seems like they would be helpful when reaching... like the ones on a genny. I view an A-Sail as a cousin to a head sail, much of the time.

Hmmm. Why are the telltales in the photo hanging down? Shouldn't they be streaming?

Not to say the asym in the photo is overtimmed, of course---

Ok, ok! We'll let it out more next time

In my defense the wind was literally 0 knots most of the time, and each new gust of 1-2kts came from a different direction. I was happy just to have it full for half a leg

Absolutely love that sail - saw your posting on Reddit a few days ago and didn’t recognize the boat as an Ericson, or I would have remarked on it here. I wondered about the telltales, too!

We doing any better on trim today? 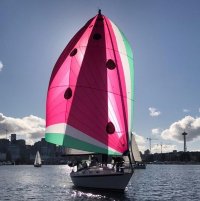 The last two years have taught me that we can count on a week or so of incredible weather in February around Seattle. Here's hoping today wasn't the only taste...