My E30+ is from 1985. I've just begun working through an instrument upgrade where I'll be adding B&G radar and chart plotter.

The boat came with instruments that mostly don't work. The older instruments don't have clear branding, but are not b&g. When I install the new chart plotter I want to also install a new b&g transducer.

The new depth/speed transducer I am planning to buy looks very similar to the old one. My question is, is it likely to be a drop in replacement, or will I need to (haul out the boat and) modify the thru-hull?

Senior Moderator
Blogs Author
Pretty good chance that the old instruments, if they are that vintage, were/are DataMarine round instruments. I read where some folks have had luck pairing an older DS transducer with a new instrument, but am not even that sure about a KM transducer.
Back in the 90's when we replaced the OEM 1988 DataMarine instruments with new Raymarine ST60 units, they came with their own transducers and I sort of recall that they fit in the same hull holes, or maybe we enlarged the holes slightly.
When you find a 'deal' on a new set, they will come with transducers and wiring. It's really good to start fresh with new parts.
Post up pix of the existing units so others can ID them, hopefully.
M

Yes, a photo of the old transducer would help. These days, many manufacturer-specific combo speed/depth transducers are actually rebranded Airmar DST800 or DST810 transducers. They fit a two inch hole in the hull.

I recently replaced an unreliable speed transducer with an Airmar DST810. The old speed transducer fit in a 2” hole. It did require a haulout to pull the old one piece transducer and replace it with the DST810. The DST800 or DST810 has two parts. A two inch sleeve with external threads is mounted in the hole, and the transducer itself is inserted inside the sleeve.

There are two reasons you should use the DST800 sleeve even if your old transducer has a sleeve. First, if the old sleeve is not the perfect length, the DST800 transducer will not be flush with the bottom of the hull. Second, the DST800 transducer sleeve has a flap that closes when you pull out the transducer when the boat is in the water. This prevents a lot of water from shooting into the bilge while you insert the plug to close the open hole. Most older sleeve/transducer set ups do not have this flap.

A slight aside. I just installed a Garmin GT15M-IH in hull transducer in our E27. I placed it up in the bow just forward of the head and under the quarter birth. I had never heard of an "in hull" transducer until I did research but am very pleased with the result and I now can get rid of another through hull. (I hate holes in boats!). these type of transducers come with small tanks that you fill with antifreeze and it shoots the signal straight through the hull. only boats with solid fiberglass hulls will work so Ericsons are O.K. Due to the location I did have to make a fiberglass wedge (shelf) and fiberglass it to the hull to get the right angle. the reason I placed it forward is I did not want the shadow of the keel blocking half the signal because Garmin does on the detailed mapping of the bottom. good luck with your project. _/)
E

Here are some pictures of the old instruments.

I can easily believe that the depth sounder thru-hulls aren't (weren't) standardized. That is disappointing though.

Thank you for the pointer to NMEA. My plan is to begin my NMEA with just the chartplotter. I'll need to preserve the old instruments just to use the old depth sounder, and then have the new one installed along with the radar when the boat is hauled in the winter.

I'm open to and grateful for any other advice you might have. I'm thinking that the NMEA backbone cable will need to go partially up the mast because the drop cable won't be long enough to get to the radar bulb. I'm also thinking about installing a solar panel to offset the extra wattage. I'm not looking forward to the contortions that will be required by running all the new wires. I am looking forward to not fearing the fog!

Here is some unsolicited advice about your radar. All of the major companies, including B&G, now have top-of-the-line models that use the Doppler effect to identify approaching targets. I recently installed an 18-inch Garmin Fantom that has this feature. It adds to the cost, but I highly recommend it. Those hazardous targets really stand out on the display (in this case, a big Washington State ferry in red; receding boats in green). 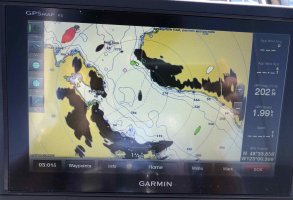 When we bought our Ericson 34, it had a mostly non-functional instrument set that looked a lot like yours. For us, that was a feature, as I wanted to have up to date instruments and everything wired to a NMEA2000 backbone.

You likely won't need a discrete depth display; your B&G chart plotter will likely display it on the main display. On Teronadon's Garmin display above, there's a spot for displaying depth in the lower right corner. His display does not show a depth, likely because his depth transducer is not connected to the NMEA2000 bus.

I don’t have radar, but I do have AIS. Quite a while ago I bought a VHF receiver (ICOM M506) that received AIS signals and transmitted them on the NMEA2000 bus. My chart plotter now displays the AIS vessels as green triangles, or red triangles when there was a possibility of a collision. More than once I've seen that collision icon in front of me when a fast power boat is overtaking me from behind. All vessels over 65 feet need to transmit AIS signals, so I can see all the freighters, tankers, and ferry boats in NW Washington waters. 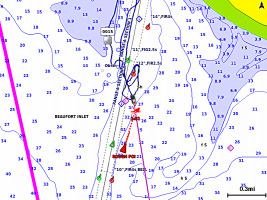 This example is of a Garmin chart plotter display and is from here:

I found that displaying AIS vessels on the chart plotter was incredibly useful. I can see approaching traffic when it is still a ways off. So I later decided that I wanted to be seen on AIS, and purchased a Vesper Marine WatchMate XB-8000. Now I know that larger vessels can see me on AIS. If you decide that you want to transmit your location on AIS (like with the WatchMate), you won’t need a more expensive VHF radio that receives AIS signals. The WatchMate also receives AIS signals and puts them on the NMEA2000 network.

A poll on this forum shows that 85% of the respondents had either AIS or AIS and radar. The comments in that thread discuss the merits of each.
E

Love this idea, thanks.

Epenn said:
Here are some pictures of the old instruments.

I can easily believe that the depth sounder thru-hulls aren't (weren't) standardized. That is disappointing though.

Thank you for the pointer to NMEA. My plan is to begin my NMEA with just the chartplotter. I'll need to preserve the old instruments just to use the old depth sounder, and then have the new one installed along with the radar when the boat is hauled in the winter.

I'm open to and grateful for any other advice you might have. I'm thinking that the NMEA backbone cable will need to go partially up the mast because the drop cable won't be long enough to get to the radar bulb. I'm also thinking about installing a solar panel to offset the extra wattage. I'm not looking forward to the contortions that will be required by running all the new wires. I am looking forward to not fearing the fog!
Click to expand...

Those are Standard Horizon brand instruments. Definitely not original on Ericson in 1985, They must have been added later. Still, many, many transducers were made by Airmar and would likely send signal to your new B&G MFD. It works for me with an old original Signa Marine depth transducer plugged in to the Simrad MFD, not on the NMEA backbone cable, IIRC. I believe there is a plug in spot for depth, at least on slightly older Simrad/B&G units. B&G and Simrad and Lowrance are all the same, BTW. Why don't you just try to plug the depth transducer in to see if the depth appears on screen?

Otherwise, try to measure the diameter of the old transducer and a drop in replacement is very likely available. Newer transducers are likely to have more range of depth, combined functions of depth, speed, H2O temp, etc.
M

Epenn said:
I'm thinking that the NMEA backbone cable will need to go partially up the mast because the drop cable won't be long enough to get to the radar bulb.
Click to expand...

I don’t have radar (yet). I looked into the Garmin radar installation, and Garmin uses an Ethernet cable to connect the radar dome directly to the chart plotter. This is the same Ethernet cabling as your home computer network cable, and is much faster for data transfer. This makes sense, since the NMEA2000 bus is not nearly fast enough to carry all the radar image data. I strongly suspect that B&G does something similar, so you won‘t need to run the NMEA2000 backbone up the mast.

Senior Moderator
Blogs Author
For several (practical) reasons I would suggest you install that new radar on a dedicated post on one side of the transom. The cable that they provide with the radar will be plenty long enough. We used to have a satisfactory but heavy aluminum post, and now have a carbon fiber post. Pix and notes in my blog here, and if you want more info just ask.
Here is a picture from a few years ago, up in BC. That alum. pole has new been replaced. 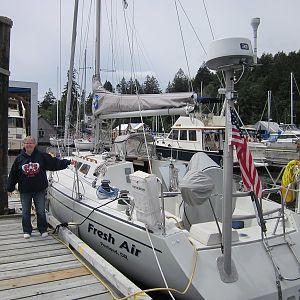