supposedly there’s a fungus or algae that can grow in your tank. I’m not sure if it’s actually in fuel or water at bottom but apparently enjoys the environment. I’ve heard about it in av-gas or jet a from my flying days as well as marine and other diesel situations. I’ve heard it referred to as diesel bug —for one. And I now believe I may have met the creature.

it started with something petroleum in bilge. The search for the source was lengthy and only when I removed the base board under my deep six house batteries did I discover it—-diesel— about a gallon floating under there next to the tank.

unfortunately further exploration led to nothing but a likely leak from the inferior medial corner of the tank.

my boat is a 85 e 38 —-one of the last first gens made. Once empty, tank was only 30 ish pounds and easily lifted out of its space with 2 of us but only after cutting a hole in wood q berth base—-this piece never lifted as hoped for.

It was then easily maneuvered into galley and then extracted out of entryway—NOT. Not even close. Bring a can opener—-Plan to cut one quarter of end width off —skinny corner —will lose a couple gallons when fixed. Was a 60 ish gal tank.

inside, in suspected corner, is a material that could be goop or grime or anything but looks very much like the diesel bug I’ve seen pictures of. Outside is a corrosion that almost turned the aluminum to cardboard—although still rigid. 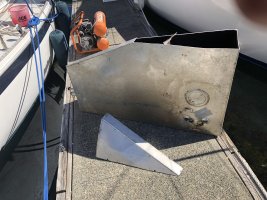 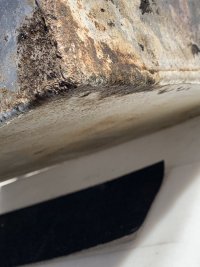 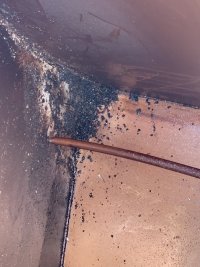 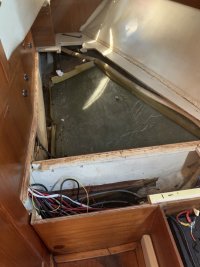 Major pain albeit Interesting project. Hope it not you

That corrosion is caused by sludge and water laying in the bottom of the tank. I just went through the same thing and got about a quart of heavy black slime out of my 20 gallon tank. Mine did not have an inspection/clean out on it so I cut a access port into the tank, cleaned thoroughly and repaired from the inside using West System epoxy. So far so good and now I have a removable plate to clean it out when needed. The corrosion caused a small field of something akin to a fine cheese grater about 2" in diameter. As you said still solid but porous. I am sure mine had never been cleaned out so it was 37 years of build up. With the tank out you should be able to get it repaired good as new.

Oh and the diesel "bug" I know of is an algae that grows in the fuel and from my experience with large diesel equipment it is a thick yellowy blob that will block your filters, lines, and even fuel pumps. There are many diesel additives that will prevent the growth but generally the problem occurs when you fill up and it shows up as a nasty surprise..
You must log in or register to reply here.
Share:
Facebook Twitter Reddit Pinterest Tumblr WhatsApp Email Share Link
Top