I normally don't use the 5hp kicker, kind of a pain to try & reach around behind me steering. My kid's smaller, I go amidships & keep er balanced. She rows very very well though, we like to take her around the marina when we go a-visiting...

Here is same dink lashed to foredeck of Bless Ed, our beloved Columbia 26MK2. At a buck twenty she puts some weight up there but she's still a rocket tank

A very light wooden pram is nice to have. My avatar is an Eastport pram built from a kit from Cheapeake Light Craft.

Here are construction and sailing videos:


Jeff Asbury said:
I have had my 8'6" 2003 Achilles inflatable tender (Lil' Cuc) for two years now. She's the daughter of the mother ship, the "Pride of Cucamonga". She's powered by a 2002 Yamaha 4hp 4 Stroke long shaft. She has a inflatable keel and will get up and plane with one 200 lb person. She's been very reliable! 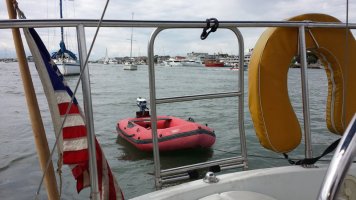 We moved from the 11' fiberglass to this 8.6 Duras inflatable with inflatable keel and floor. Tohatsu 4HP motor.

We can delpoy in 10 minutes and stow on the deck or below for off shore sailing.

Loki is an 8' Trinka...Oar (and occasional sail) power only!! 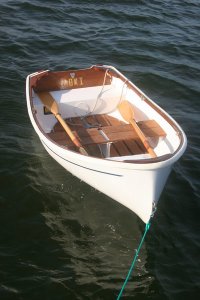 Anybody use a Boston Whaler?

Is there anybody on here who uses a Boston Whaler for a dink? I've got a friend selling a 9' Boston Whaler and I was wondering if it could make an appropriate dink for my E-27. We're using a friends Walker Bay 8 and my wife hates how tippy it is. I know Whalers are great boats, just not sure if it would be the right boat for us...any opinions?
M 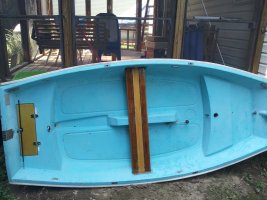 We have a 1970 Boston Whaler Squall (about 9'), but we haven't actually towed it behind the Ericson yet, because my atomic 4 is in the process of being replaced. We've had it out in protected waters, and it didn't seem too tipsy, but I'm comparing it to kayaks and canoes and such. I'm not sure how it would compare to the Walker Bay. I think an inflatable would be more stable. I've used two types of hard dinghies, and one inflatable, and the inflatable seemed impossible to tip, whereas the hard sided ones have frequently "dipped" a rail.

I've used it with the sailing kit, and a 2hp outboard. Sailing it is great fun with 2 people, but there are better sailing boats out there. It has a self draining cockpit, and has a mooring bit on the front. Mine has a fiberglass keel with a skeg in the back, so I imagine it tows well, but with the hard sides, I'm a little concerned about bumping against the Ericson hull.

It's a little heavy for 1 person to deal with. I have a little roller dolly and I can heave and ho it up into the truck bed, but my wife and I can lift it out of the water and put it in the bed without too much straining. I would not put this particular type on a dinghy davit. I think it would be way too heavy for that.

We did tow an inflatable about 10' behind the Ericson 32 and a following wave pushed it against the transom with enough force to make it feel like the engine misfired. Then it filled with water, but that's a different story: http://www.ericsonyachts.org/infoexchange/entry.php?189-Mis-adventures-on-the-Chesapeake-Bay

Best advice is to take your prospective boat on a test drive with the people who will usually use it, and see if it fits your expectations!

The dinghy part of the video starts at 2:45. As you can see in the video, it's a little tipsy when moving around, but once it gets going, it's quite stable. There was a little chop so, there was some spray coming over the bow. With one person and a 30lb thrust trolling motor, I was able to hit 3 knots.

We also recently used an inflatable Intex Seahawk Sport 400 with the motor mount with the same trolling motor. It has a low pressure inflatable floor, and looks more like kid's inflatable than a proper dinghy, but it has a 660lb capacity, rode dry and fits into the trunk of my car, or the bed of my truck fully inflated. Super lightweight, and towed just fine behind the Ericson. I think we may primarily use the Intex. 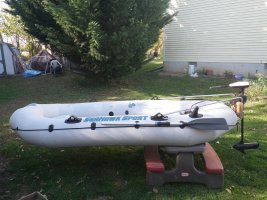 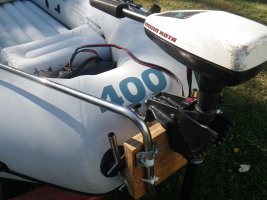 
Nmeyersailor said:
Is there anybody on here who uses a Boston Whaler for a dink? I've got a friend selling a 9' Boston Whaler and I was wondering if it could make an appropriate dink for my E-27. We're using a friends Walker Bay 8 and my wife hates how tippy it is. I know Whalers are great boats, just not sure if it would be the right boat for us...any opinions?
Click to expand...

I think the "dinghy" that Boston Whaler made was different than my Boston Whaler Squall sailing dinghy, higher H.P. capacity, drier ride, etc. I recently saw one for sale for >$2,000 w/engine.

We took the Boston Whaler Squall out last weekend and towed it behind the boat. It tracked great with the large skeg in the back, and the large mooring bit molded into the front. There weren't many waves to test it in, but it handled the large boat wake fine. I got between 2-4 knots with a 1.75 hp outboard depending on the load. We had two adults and three kids in it at one point without it feeling tipsy or overloaded.

The biggest drawback so far is that the "self-draining" cockpit is also "self-filling" when I'm sitting in the boat, so the plug has to go in right away. I may try to make a flapper valve or other type of check valve to slow the water entry.

I have some load-carrying issues with my Eastport pram, and finally admitted we need a standard inflatable for kids, and taking four adults short distances to and from shore.

I am quite impressed with this model. It inflates very easily, with only two chambers. The floorboards roll up and don't have to be removed. The package, in a robust bag, weighs about 50 pounds and is something like 3.5 feet x 2 x 1.5. I can wrestle it down below and into the quarterberth without too much trouble.

I plan to get a Torquedo electric outboard, but I was also surprised to find that it rows pretty well with the included aluminum two-part oars. As a non RIB, and without even an inflated keel, the floor is remarkably firm underfoot.

I don;t think this fabric is for leaving in the sun, but better stored when not in use.

Believe it or not, all this brand new (on sale) is $699. At that price, almost disposable.

Blogs Author
I just ordered a Zodiac with high pressure air floor from defender.com for $1,036 I will be using it with a Yamaha 2.5 that I got for a couple hundred bucks. I'll let you all know what I think of it in a week or two.

Shelman said:
I just ordered a Zodiac with high pressure air floor from defender.com for $1,036 I will be using it with a Yamaha 2.5 that I got for a couple hundred bucks. I'll let you all know what I think of it in a week or two.

I just stumbled onto this post of mine from a year ago.... Well it seems I did not make good on my promise of giving a report in "a week or two"... but better late than never right.

I have been extremely happy with the Zodiac and its high build quality, but the little 2.5 hp was totally under powered for my needs. The boat would not even reach what I would call hull speed of a non planing vessel of this size. It was about as fast as a good canoe. But I recently happened to stumble upon a 1997 Evenrude two stroke 6 hp two cylinder that needed lots of work but had fairly low hours and good compression. As usual its really non use that destroys things in the marine world. Anyhow, after a full carburetor rebuild (twice), and going through and replacing all the seals, oil, and impeller in the lower end it works like a charm and starts on one half hearted pull.
Fantastically the 6 hp will get the Zodiac on plane with two full grown men abord and a full 3 gallon tank of fuel !!! and can thereafter remain on plane with about 1/3 throttle. I find the 6 hp to be a manageable weight and it gives night and day performance over the smaller sized motor.
The dinghy is defiantly limited to two people at only 7' 7" and if I had the need to carry more I would get the next size up which is one foot longer and has larger tubes, this would allow you to carry three people or a good pile of gear. For my needs however the size is perfect since there is only two of us, and it lives in the quarter birth when not in use so it needs to be extremely light and easy to stuff through the companionway.
I know questions about dinghy size and especially planing capability come up a lot on the various forums so I wanted to post my results here in case others are seeking the perfect dinghy.
Last edited: May 28, 2016

Which model of WM inflatable did you end up with?

I've been waiting for this one to go on sale, primarily because it (reportedly) stows very small for one with a semi-rigid floor system.


Edit - never mind, just read the whole thread and saw your prior post.

Have you had any valve issues with the PRU-3? Reading the reviews pretty much waved me off that model but, as you note, on sale it is practically a consumable rather than an investment.
Last edited: May 28, 2016

The valves are standard and good quality. Some reviewers were unfamiliar with typical inflatable valves and cried out for "instructions."

"WEST MARINE WHY DON'T YOU SUPPLY INFO FOR HOW THE VALVES WORK?
"Once I looked up how to use the valves it became a much safer boat. You really should post how to work them."

This model has a soft fabric bottom under roll-up slats, so it is not a good choice for dragging behind your car over a barbed wire fence.

It is also probably also not the best choice for leaving uncovered on deck for a year, since it is PVC/polyester not Hypalon.

But as a small, light, easy-to-stow inflatable that will carry five people (in a pinch) it is well made and I can recommend it without hesitation.
Last edited: May 29, 2016
K

I'm a little suspect of anyone who needs "instructions" to figure out those inflatable valves . . . I mean really!:nerd:

Blogs Author
I am leaning toward a high-pressure inflatable floor model, though I have never used one. Well, actually, I guess that's what I have on board now, but it's a SUP. I'm really impressed at how rigid it is at 15 psi, and I haven't had to pump it all summer. Far more rigid than my inflatable kayak or old Zodiac. Don't know about durability though. It seems like the most stowable option for a 30'ish boat. Whole different kind of valve, BTW.
May have a Walker Bay for sale, one of these days!
You must log in or register to reply here.
Share:
Facebook Twitter Reddit Pinterest Tumblr WhatsApp Email Share Link
Top