Blogs Author
I know the topic of PVC elbows has been thoroughly discussed, and I even asked some questions about this waste discharge through hull in an earlier thread, but it's taken a new twist when I dug into it this weekend. My plan was to simply replace the elbows with a TruDesign equivalent, and move on. The 3/4" elbow came off easy. The 1 1/4" has an issue I didn't notice until I was nearly finished working the valve off.

Picture is before I started working on it: 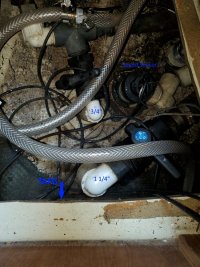 After removing the valve, the 1 1/4" elbow wouldn't budge. Even then, as you can see, it would only make it a half rotation before bumping into a TAFG section. So, they must have threaded the elbow on while twisting from below and given it the last half twist after everything was nearly tight. In my frustration, I cut it all out, which I think was the right choice. The outside looked a little dicey, anyway. So I have to replace it with something (or just patch the hole as previously discussed). The valve seems to be just fine, so I can re-use it. Due to clearance, I think I need to stick with the elbow being first, even though I don't prefer that.

Here are the two options I've thought of:
1) Replace with a like setup - through-hull --> elbow --> valve
-- Certainly the easiest and cheapest solution to retain functionality
-- I still have to thread it from the bottom and it will suck for the next guy who needs to do something with this

2) Move/install a new speed sensor where the 1 1/4" thru hull was and put this thru hull/valve where the speed sensor was
--This seems like the better long-term choice - I think the holes are the same size and it makes it easier to install as I can thread everything together in pieces.
-- The thru-hull for the speed sensor doesn't require the side-to-side clearance that the elbow does, so it should fit even with a snug space down there (I may have to trim the white board above it back a little bit to pull the sensor in and out)
-- Definitely costs more - might have to buy a need speed sensor if the housing won't come out
-- Anything I'm not thinking of?

From what I've seen from @Roger Janeway on Nora J, his throughs are in completely different locations; nothing that close to the TAFG.

Blogs Author
So, upon further exploration, the larger through-hull in question was for waste pump-out overboard. So, that and the other waste overboard holes were remove and the holes sealed. Since I'm on a lake, it ended up being the easiest and cheapest choice. The 3/4" served as both head sink drain and input to flush the marine head. I'm removing the marine head system in favor of an MSD porta-pottie, so now mine is just a drain for the head sink.

I have non-PVC replacement elbow ready to go. My options are:
1) through --> elbow --> valve
-- Original configuration. Not sure why they did it this way - maybe for hose/valve clearance?

2) through --> valve -->elbow
-- This seems to be the safest option. Will the drain function in this configuration? Clearance seems fine. Any downsides I'm not thinking of?

Appreciate any wisdom/advice. I have to decide this week as I'm re-splashing on Saturday. Thanks!

Senior Moderator
Blogs Author
Note that if you use the Forespar "OEM" style thruhulls, the body of the thruhull incorporates the ball valve and you can have a 90 degree exit piece if you wish. This eliminates the whole (and intrinsically) weak progression of screwing together a separate valve and separate elbow.
Link: https://www.forespar.com/OEM-Valves.shtml
And another added picture link of both of our right angle sea cocks, under the head counter top. See reply #3.

seacocks have mounting holes for through bolting but this doesn't make sense to me on a fiberglass install. 1- any impact would pull the head of the fasteners through the hull. Even with the blocking. 2-you have more exposed metal [the heads of the fasteners] with very little surface area in...

Blogs Author
Thanks, Loren. Those would be great if I were refitting, and probably more ideal for this tighter location than separate pieces. I'm replacing the elbow only and just trying to determine the best order to put everything in.
Last edited: Oct 12, 2021
G

Were it I, there seems to be some logic to having valve 1st in assembly. Should the unthinkable happen and elbow fails, it .would be sad indeed if valve was after the break. This all assumes that clearances are tolerable in either configuration.
You must log in or register to reply here.
Share:
Facebook Twitter Reddit Pinterest Tumblr WhatsApp Email Share Link
Top