While I know Ericson had the outboard transom cutout in its earlier models, does anybody know if they offered it as an option during the later years? Like towards the end of the production run? I'm looking at a pretty clean late model E27 with an outboard and the inboard compartment looks pretty empty and clean. I'm just trying to determine if the cutout was a home job or not. Also, in the event I get this boat, is there a favorable engine size that seems to optimize performance?

I understand the manuverability issues. Had the same with my old Pearson 26s. I would rather have the inboard, but since that isn't an option...

Check out this thread....

Senior Moderator
Blogs Author
The outboard version of the Ericson 27 had a well-designed transom cutout for an outboard. There is (or used to be) a participant here that did a 'full Monty' conversion of a solid transom model complete with new solid wood coring. Note that you will probably need an extra long (25") leg OB to make that work well.

If looking at an E-27 with a deceased inboard engine nowadays, best just to buy it at a price that will allow you to install a modern small diesel. Either buy one new, or shop around for a good used one that was replaced by a larger diesel.
Plan B is to learn to rebuild that engine that is there now.

I recall an example locally from several years ago where an early Cascade 27 had it's original one cylinder diesel (7 horsepower!) replaced by a new Beta at about 12 hp. Old engine ran OK but the owner wanted more power. The removed Ferrymann engine was sold in a few days for a quick $500.

One other thing to keep in mind is that we buyers were demanding a lot more interior accommodation by the 70's, and all builders responded by raising the freeboard. A talented designer, like Bruce King, could do this and maintain good performance and good looks. Some other (nameless) designs became forever homely, and nowadays show up on Craigslist with the ultimate descriptor "would make great live aboard"...

As transoms got taller, bracket-mount outboards (already disadvantaged by being extended aft over a foot and cavitating easily in waves) became Really Really difficult to use because it was too hard to reach them unless you had arms like an ape.

Sorry to burden you with trivia, but it is a multi-faceted problem.
Last edited: Jan 10, 2018
S

No burden, Loren. In my case, with the 1978 model I'm looking at ... there is no inboard. The engine compartment has never had one installed. You could eat off the floor of that thing. The only thing I can figure is the original owner bought it new with no engine and either had the factory cut out the transom, or he did it himself. Which brings me back to my original question. Was there an option at Ericson in '78 to order a boat with the transom cut out for an outboard.

I'm trying to get as much information from the owner, but having to work through a broker to get answers to all my questions. So ... I'm doing my due diligence.

I think with a careful inspection, after looking through these two threads, you'll be able to guess if the cutout is factory or not.

If it appears rock solid and perfectly realized, no problem either way.

) If it’s factory the gelcoat will be nice and smooth on the transom and the inside especially around the cockpit drain. If the boat has been painted it might be more difficult to tell. Look carefully shining a bright light parallel with the surface to see if there are any irregularities. If not it’s probably factory. Not many people are crazy enough to chop into a boat... and I wouldn’t do it again. By the way the cutout I did turned out absolutely bulletproof and the boat is still actively sailed today (by its new owner) with a big 25 inch Yamaha 9.9 hi thrust outboard on there with no issues. Highly recommend that model of outboard.
Last edited: Jan 11, 2018
S

It looks to be professionally done, so I'm guessing the factory did it. The current owner has a 9.9 Honda Four Stroke on the back. That seems a bit overkill and at 98, hell ... call it 100 lbs off the stearn that is a lot of weight hanging off the back (thinking sailing performance mostly). But its hard to argue against a Honda.

It looks to be professionally done, so I'm guessing the factory did it. The current owner has a 9.9 Honda Four Stroke on the back. That seems a bit overkill and at 98, hell ... call it 100 lbs off the stearn that is a lot of weight hanging off the back (thinking sailing performance mostly). But its hard to argue against a Honda.

Haven't had morning coffee yet, but it just occurred to me that EY must have made a subtle change in their production schedule for the E-27 from the early 70's towards the late 70's... to wit, the early ones made the inboard an option (albeit a common one), and the later part of the long model run saw the transom molded out routinely as solid i.e. planned for an inboard unless a customer specifically ordered up an OB model.

I now recall one of those later-model-run E-27's that a friend owned long ago. His boat had a stock transom cutout, but with the top couple inches solid. In other words his boat had a rectangular "hole" in the transom for an OB that had never been installed. point of fact it had a stock A4 gas engine that he replaced with a small Yanmar. Since that hole at the back of the cockpit was there, he viewed it as a place to retrieve a not-too-large person from the water in case of a rescue.
Anyhow, it really was a totally-finished-out part of the stock transom of his E-27. He took the boat off shore several times and while it never shipped any major water, that opening would also function as a large drain.
S 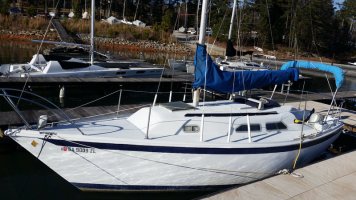 "There is no thunder in Heaven"
Indeed, I too hope not.

Thanks for a thoughtful read!
S

Welcome aboard. The 27 is a great boat. Enjoy it.

Loren, don't tell me that Heaven is so dull it doesn't even have thunder. I guess I will have to stay here.

supersailor said:
Welcome aboard. The 27 is a great boat. Enjoy it.

Loren, don't tell me that Heaven is so dull it doesn't even have thunder. I guess I will have to stay here.
Click to expand...

Loren Beach said:
"There is no thunder in Heaven"
Indeed, I too hope not.