Does anyone else have issues with the end of the tiller blocking the companionway? Our 1974 E27 has a 49" tiller that appears to match the original Ericson plans but seems a little on the long side (really tricky to sneak around it when going below deck). 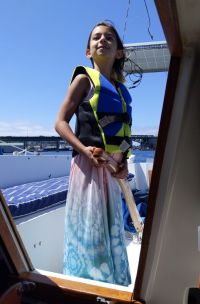 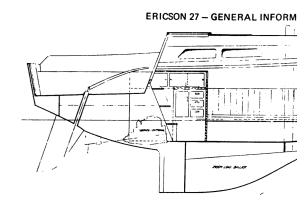 While I do like the control and mechanical advantage that the long tiller provides (especially when we're motoring and my 8-year-old is at the helm), I'm wondering if 44-45" might be a better compromise for space and maneuverability?

What length tillers do others have on their E27? Does anyone have experience with a shorter one?
Last edited: Sep 27, 2022

Senior Moderator
Blogs Author
She has mastered the "look of command" quite well! Way to go!

You could laminate up a new tiller, a bit shorter, and try it out for a while. You have the present one to make a tracing pattern from to get the curve that's needed.

Blogs Author
That was definitely an issue with my old E27. We got used to lifting the tiller up enough for someone to duck underneath into the companionway, but when conditions were sporty it could be a challenge. The nice thing with this length of tiller is the ability for the helmsman (or helmswoman!) to adjust the main sail controls on the cabin top while steering, and to get partial relief from a cold wind by hunkering down next to the aft end of the cabin bulkhead. I would think that shortening the tiller would make reaching the main sail controls more difficult, in addition to requiring more effort to steer in heavy conditions. Doesn't hurt to try a shorter one and see how you like it though.

BTW I never did see a 27 with a tiller in the shape the brochure line drawings had. They all looked like yours with a double bend. And it's great to see your 8 year old loving it! My kids had lots of fun sailing with us. Hopefully it sticks with them into adulthood!
G

I think you are missing the fact that you can steer while standing in the companion way when it's cold outside. I did this on cold mornings and at night! Think of it as a feature. Inboard steering! Kind-of

I have a Wheel steering boat. at the beginning of this year we lost the helm. fortunately, I have a tiller for emergencies just like the one in the picture. for easy storage I lopped off about 12 inches from that tiller. I will tell you that the amount of force required, with just a foot missing, was quite a lot causing much oversteering etc. moral of the story is I would mark with tape a line where you would like to shorten it and try steering using that point for leverage only for a whole trip or two. Under motor power was the worst. Then you can decide if shortening it would be O.K. TPCorrigan. _/)

Blogs Author
The original tiller on my E29 came right up to the companionway and was sometimes obtrusive. It would interfere with any sort of plans for a swinging companionway door, for example. As it happens, I fell on it on a "sporty" day and broke it. The new tiller that I ordered up, that the vendor claimed was the specification for E27/E29, was at least six inches shorter. Somehow, I've never quite gotten used to it. Maybe it was the memory of the breakage, but I always seem to handle it as if it were an egg shell.

Maybe somewhere along the line a discrepancy arose between "as specified" and "as built."
G

My tiller is the same, never considered that it should be different. Primarily sail solo and moving the tiller aside as I slip below for any moment isn't much different than flipping the mainsheet off the companionway ladder on my way up or down.
As mentioned above, standing on top step in the companionway, whilst manning the tiller on a cold November morning is like having an extra blanket!
H

That’s how ours is. I don’t mind the length. Having it up under the dodger makes PNW winter sailing much more enjoyable. What we did do was modify it a bit to make the end a bit higher (re-drilled the forward bolt-hole about 1/2” lower and filled the old one). That significantly improved the ergonomics, but caused a little bit of a problem with our tillerpilot.
J

That's how mine is too. There is something I've always wondered about. When people are moving in and out of the cockpit, I'm able to flip the tiller around and steer standing from the back of the cockpit similar to a wheel.

I've only ever done this for short burst of time for convenience, but am I doing any damage to my boat when I do this?
G

Jen said:
I'm able to flip the tiller around and steer standing from the back of the cockpit similar to a wheel.
Click to expand...

I do the same quite frequently while operating my outboard, which only has the traditional twist throttle and shifter on side of motor. Not harmful in any way to the boat tho in my case, holding the rudder while reversing and with tiller flipped over, takes some strength.

Senior Moderator
Blogs Author
Longer is better for control, worse for seating convenience. But there's no right or wrong.

I would go sailing and mark off potential cuts at the end of the tiller. See how short a tiller performs adequately, in heavy air especially. The trade-off is leverage.