We may have lost one of ours yesterday. In Port Angeles, a brand new Westport 125 (not even named yet) was at the fuel dock. For an unknown reason, it pulled off the fuel dock and crashed into my dock. Luckely for me, I'm halfway down the dock and not effected. Unluckily for my friend, Bruce Cutting, his 35-2 was crunched. He says it is probably a total.

I will attempt to attach the article from KOMO News when I figure out how to do it. The article has a picture that shows graphically why you stay out of the way of these things. 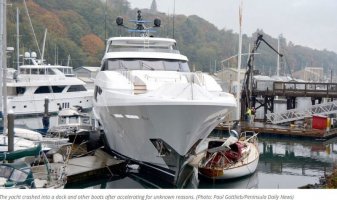 Given the situation, either a full repair or a fat check is in the offing for your friend...
Perhaps the yacht builder can bring it into their huge building and do a rebuild, since they may not have yet handed over the title to the owner of the new vessel. They may well self-insure for local claims like this. (no knowledge, but I have heard of other facilities that handle it that way; big companies have funds set aside, in lieu of more insurance premiums. Of course that's between your friend's insurer and the offending vessel owners.)

This is a situation where having an "agreed value" dollar figure on your boat insurance is vital! :clap:
Last edited: Oct 8, 2019

Condolences to your friend. We all have so much blood sweat and tears in these things that they do become part of us. But being in the accident business, about this point is where in discussions with owners its when they learn that they are no longer owners; the insurance company is. Have your friend get everything off as soon as possible which is not part of the boat itself.

Next painful step is dealing with insurance company initial offers and determining if those are sufficient.

I went down to the scene today and think I can be sure the 125 (40 meter) boat is still a Westport boat. The scene was totally cleaned up except for the bent over steel piling. I'm sure the 125 is in the Westport construction building safe from prying eyes. I found my friends 35 in the yard. It is history.

It is ruptured on both sides below the waterline and on the starboard side, it is also ruptured to a foot and a half above the waterline. The prop shaft is bent under at almost 90 degrees indicating the boat was rolled on it's beam ends. It certainly was no competition for the demolition derby with the Westport.
S

Got a few pictures of Lady Jane today. She's a gonner. The 40 meter took out four boats and a substantial amount of dock. Apperantly, the 40 meter tied up to the fuel dock and the engines were ready to shut down when she went to a full power mode and she snapped off the dock lines and she started to head down the fairway to a dead end. The helmsman cranked her over toward the breakwater before she could gain too much speed, The rest is history. 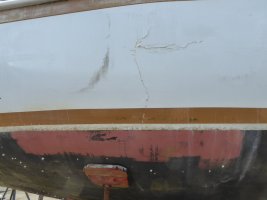 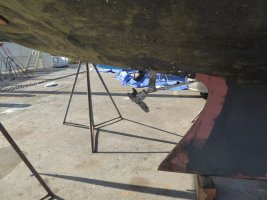 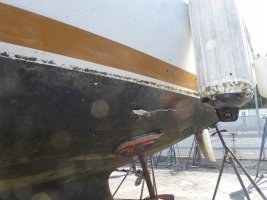 Blogs Author
Man that hurts.
Let’s hope that the builders are more up front that sleazy government lawyers. Seriously, the value of a classic like that ought to be peanuts to them. (I once had a circumstantially similar loss of a vehicle to a school bus. Seemed cut and dried. Until the lawyers got involved W. T. F.)

Even after that much impact and crush, it is impressive to see how well the hull returned to shape. I've seen honeycomb construction suffer lesser damage and just lose all integrity.

toddster said:
Man that hurts.
Let’s hope that the builders are more up front that sleazy government lawyers. Seriously, the value of a classic like that ought to be peanuts to them. (I once had a circumstantially similar loss of a vehicle to a school bus. Seemed cut and dried. Until the lawyers got involved W. T. F.)
Click to expand...

As the saying goes, "to reiterate again..." While the payout from the large yacht builder will be relatively very small, the only party with leverage in this is the owner's insurer.
If he has an agreed-value policy, he gets a check tomorrow or yesterday (less the deductible). If it is a lower-premium policy when the insurer controls the "depreciated" value, he may get a rather small check.
Either method may be 'equitable', depending largely on the condition and equipment of the insured asset.

One way or the other, the accident happened with loads of witnesses and left no doubt as to blame.

Further, the Port of Port Angeles will be knocking on that builder's door for $$ to replace damaged docks and piling --- and that may be a lot more than the cost of the assaulted Ericson.

In due course, I hope we find out, probably in general terms, who the insurer is and if they honored their policy terms. (If it is the one I insure thru, this would be a good data point narrative.)
S

The toll went up a little. The Westport took out six boats in all. One, a classic wood boat only lost the upper quarter of it's mastl Lots of splinters. No way to tell how much damage the Westport suffered as it disappeared into the construction building muchly quickly. I bet it doesn't leave tomorrow for delivery to the new owner in Florida as planned.
S

Unfortunatly "Lady Jane" is history so we are one less. Bruce is not happy.
E

Sorry to see this. It's like the scene out of Caddyshack brought to life. Unbelievable.