Ericson/Olson 34 on the cover of SA?

This looks like an O-34 on the cover of Sailing Anarchy. Any intel? 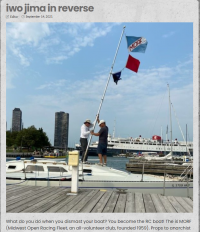 That picture was taken at the dock at Columbia Yacht Club in Chicago and the boat in question was dismasted (I believe) during this year's Race to Mackinac. I'm pretty sure the owner is an active forum member though his name escapes me.

Loren recommended I use the white phone in the lobby to update the group, but it had no dial tone.

Yes, SA ran the picture of us striking the Race Committee flags post-race at the dock of Columbia Yacht Club. I 'borrowed' the clubs extending flag pole for the day, using a couple noodle tail-ends as soft wedges to secure the mast partner. Halyard trim left a bit to be desired and there were 'only' 4 boats (1 boat twice) called OCS. And there was only 1 Protest lodged, which was dismissed Tuesday night.

The Race we served as Committee Boat for, The Commodore's Cup, is MORF's (Midwest Open Racing Fleet) season ending invitation only race, in this case it was 3 races run on Saturday September 11. We qualified, and received an invitation, based on our 1st half results; I guess it was nice to be invited, better if we had a mast! MORF, founded in 1959, is an all volunteer organization, w/o a brick-and-mortar nexus, with a membership representing 4+ Chicgoland yacht clubs. Serving as Committee Boat one race a season is one of the duties required.

The good news Saturday was the forecast for 20 knot SW winds, gusts in the mid-20's, waves building to 4+ footers didn't happen, making the time we were hooked to the lakebed (30' of water, 120' of rode played out) not terribly uncomfortable. Wind did build for the final race, waves commensurate, with only the final 1/2 hour beginning to be rockin' and rollin'.

Those who took the 'under' of 2 Pukers for the number of Race Committee members turning green won, as the actual was '0'. No money changed hands. 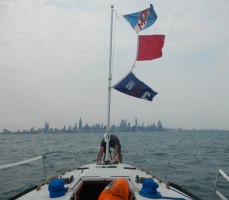 This is a view west, just after we'd unhooked and stowed the anchor. Nemo, peeking out of the companionway, is the stern floating guard to keep the race boats well off the stern.

I'll update the Mast Status in another post, but Ballenger Spars has us penciled in and the order will be placed in the next week or so (once the Insurance check has cleared, Admiral's orders). So that adventure is pending.