North Sails (private labelled early Harken) furler, included are drum with pre-feeder, upper swivel and 35' 8" of double groove foil. Suitable for a 37' 9" x 1/4" headstay. I disassembled the drum and swivel, cleaned and lubricated the bearings. Drum does have a length adjuster screw. Always on a northeast, fresh water boat so it didn't see a lot of heavy use. Condition very good. $250.00 OBO plus shipping.

Forgot to attach the picture. 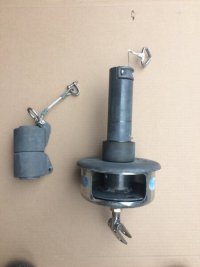 Pardon my ignorance, but how observing the unit can I identify it one way or the other?

Al, if Harken made it, there should be some numbers stamped on the drum somewhere.

No identifying marks on it. None were found when I disassembled, cleaned and lubricated it. Only the faded North Sails label. What are the specific physical differences between a Unit 0 and Unit 1 that can be used to identify them?

Mine did have "1" or "Unit 1" stamped into the black anodized top of the drum. But there's also the drum diameter that can be measured. Let me do some digging and see if I can find it...

Here it is:
Look at the bottom of this Harken guide. It tells you ways to identify based on drum diameter, torque tube size or clevis pin size:

Brian: Thanks for the reference. I'll check and identify it.

As per the provided specifications the furler I have is a Harken MKI - Unit 1.

Afrakes said:
As per the provided specifications the furler I have is a Harken MKI - Unit 1.
Click to expand...

Not sure how useful my bit of trivia is, but this spring we had our Harken Mk2 furler replaced. It had jammed last fall and that was the culmination of it's developing more and more reluctance to roll in, for a number of months. I had installed it in '95, so it had served for quite a while.
Also, inside of it was the headstay, installed at the same time. (All of the other standing rig has been replaced, over a decade ago.)

I was told by our Harken rep that very few parts are available for that model series nowadays. Since the labor to attempt a repair would probably be money wasted, we started over. I believe that ours is a "unit 2".

Afrakes said:
As per the provided specifications the furler I have is a Harken MKI - Unit 1.
Click to expand...

If it's a Unit 1, it should be good up to a 9/32” headstay (factory on my E35-3) and also good for up to a 35' boat.
Foils were the same from Mk1 to I believe Mk3 and are still available (~$99/7' foil).
Balls for bearings are also still available. Other stuff (snap rings, etc) are available from there Grainger catalog. Swivel can be from any system so long as it's designed for the same foil profile.
One issue with the Mk 1 is that the foils are merely clamped to the torque tube, and if not periodically checked can slip down and bind on the forestay. This was fixed from Mk2 onward with "teeth" in the bottom foil that create a mechanical lock rather than relying on friction. But this is easily checked.