Kenneth: I went by our Kubota dealer to inquire about a quote for a bid on a tractor for our airport...while there I asked parts fella about the D850 engine in the old B1550 tractor (same as my M25, 5421)..had they heard about the ear on the crankcase cover breaking off? This was a long time Kubota parts specialist who pulled that question up on the Kubota parts computer and made a phone call. Lo and behold there was a previous Kubota directive which required an alternator bracket "upgrade" replacing the original bracket. I inquired if there was a reason for this "upgrade"...he said one word..."Harmonics". The upgrade was for several Kubota engines.

The part number for the Upgraded bracket is 15451-64420 alternator bracket; the cost with expedited shipping $44 and change. Took 3 days.

NOTE IMPORTANT: This bracket mounts in "REVERSE" of the original one and conforms to the shape of the alternator. The new bracket is also a little thicker than the old. He also suggested GATES BELT #7405.

Below are photos of the new reversed bracket and belt on my M25. The belt is a tight fit and needed only 1/3" bracket adjustment for the proper tension. The belt ran very smooth, vibration free. 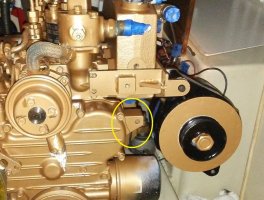 Since your new bracket connects to the same two points, using the same two bolts as the old bracket, I can't see how it would reduce the forces on the ear at all. And the lower half of your bracket still mounts to this problematic ear.

Here is the Safety Bulletin Universal/Westerbeke put out in 1991 about the problem (see SB193 below). The Universal/Westerbeke solution is the rectangular bracket that mounts to the exhaust manifold (4 bolts) and the water flange (2 bolts). It's bomb-proof compared to the old bracket and it eliminates the need to use the "ear" as an attachment point. 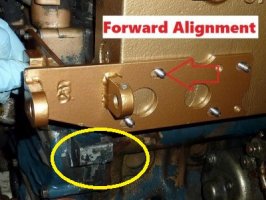 The Kubota guys won't know about the Universal bracket since Kubotas don't have a water cooled exhaust manifold like the marine version Universal engines do.

The risk to cracking off that gearcase cover ear is shown in these pics: 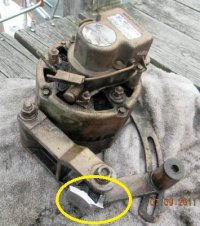 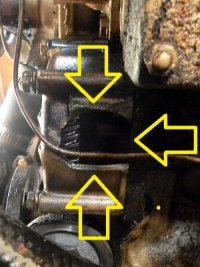 Your boat, your call. Good luck with whatever you decide.

Nice to know about the stud removal tool, would be eve nicer if it worked for you. I did this a number of years ago, it was a cascading nightmare to finish. I was able to back out most the studs with vice grips, save for one. That one was replaced years later when the engine was out of the boat. I couldn't slide off the manifold with the engine in the boat, no movement at all by hand, with breaker bars, ect. Once it was out of the boat could finally leverage it enough to get the manifold off, breaking the final stud in the process. Then it was easy to get the remainder of the stud out with an arc welder.