Whelp, things aren't as done as I want them to be. I got the engine sewn back together, including an unexpected fuel filter change. While changing it, I filled it up with Seafoam for the hell of it, bled everything and started the engine.

It started OK, chugged some white smoke, but started knocking almost immediately. I let it run for a minute, reading that sometimes running Seafoam through the engine can have that effect, but it keeps happening.

At first, it would struggle to idle, intermittently dying out.

Now, symptoms are like this:
- Starts right up, sometimes idles beautifully. Sometimes idles with varying degrees of power/slight RPM changes, but no knocking.
- In idle, it throttles up just fine, hits expected RPMs, and can rev back down without issue.
- In gear, it doesn't knock immediately after shifting but starts knocking as it throttles up. The knocking then persists to idle, which is inconsistent/hard idling while in gear. Occasionally dies when RPMs are reduced to idle.
- Grey exhaust and unburnt fuel on the water throughout all of the above.
- Temperatures are good and expected (at least on the gauge)
- Oil levels are good
- I just changed the trans fluid to spec

Troubleshooting steps:
- Tried bleeding the fuel lines again, both at the knurled knob and also by loosening the fuel injector heads until fuel spurted, a la Christian Williams' previous post.

I think I'm at the point of calling in the pros to take a look, but curious if anything seems obvious or overseen here.

While I am certainly no expert, I suggest taking the filter off (it is the RACOR filter right?) dumping it, and filling it with diesel. Also did you change the filter at the engine too? MAke sure the racor is on tight, a little intermittent air leak will drive you crazy.
S

Sea Foam should only be used on gasoline powered engines only. The knocking is caused by the high compression of the diesel. It occurs when the fuel in the cylinder detonates too early caused by the Sea Foam. There must be some leftover Sea Foam in the system. I would take the filter off and thoroughly clean it and replace the element. The filter at the engine may need changing too as the contamination occurred at the Racor.

Moderator
Blogs Author
Bleed the injectors. Happened to me.

Blogs Author
Am I wrong in remembering that folks have recommended sea foam in the fuel filter as a decarbonization strategy? The bottle I got said it is fine for use in diesels as well..

Blogs Author
Replaced the upper filter, re bled the system, now the engine isn't knocking anymore. Still puts out grey exhaust and spits fuel into the water. Seems like I get 2800RPM in gear with the throttle wide open instead of an expected 3200 or so... Any thoughts?

Compression test might show something if you have not done that yet.
S

As I was getting the engine going after my little flooding incident, I tried a shot of Sea Foam even though I knew it was really for gasoline engines. The result was severe knocking. The interesting thing is mechanics don't recommend it for gas engines either. Could it be like the flushable wipes that the manufacturers say is safe for flushing down the toilet and the utilities beg you not to flush them as they clog the sewer systems up?

It could be that the engine is not quite firing evenly yet. Run it for awhile and see if it smooths out. The best thing for cleaning a diesel is to run it under a load (80% power) for a minimum of 45 minutes on a regular basis. Diesels do not like to be run under load conditions (they soot up).

Blogs Author
Ongoing adventures. Motored out to go race, engine started beautifully, like it had new injectors. Idled beautifully. Motored well, got to 2900RPM but slowly crept up towards 3000, 3100 as I let it sit at wide open throttle. Definite smoke at WOT. Then the knocking randomly started again and persisted while throttled down. I killed the engine and raced.

After the race I started the engine to motor into slip and the knocking was even more intermittent. It comes and goes without any other indication it's coming. I noticed while at my slip, there's no smoke or fuel in the water when not knocking while idling. The engine does seem to gain or lose power randomly.

Moderator
Blogs Author
I'm not a diesel mechanic, but if the fuel injectors have never been serviced it's probably time. Apologies if you've already done it. Not a hard job and due or overdue for any 30-year-old engine. It might or might not solve the issue, but would be checked off the list. 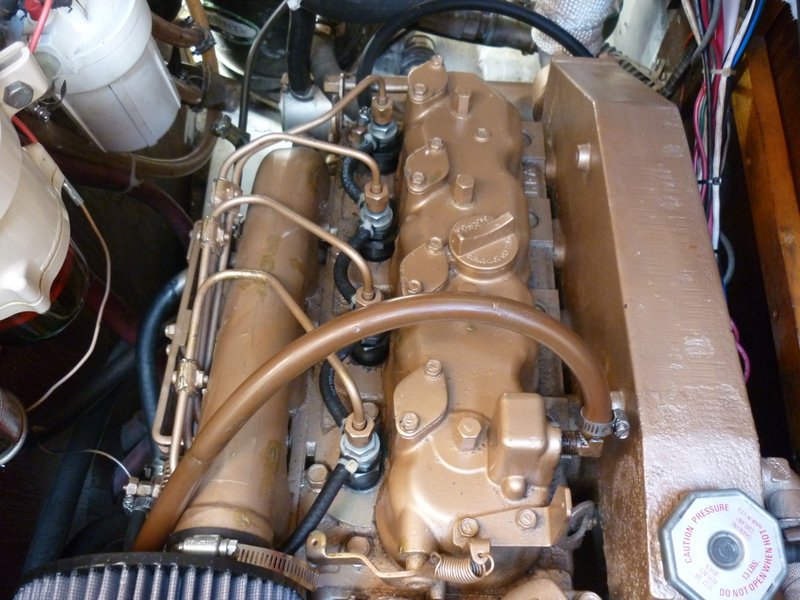 Small diesels are renowned for their simplicity. They have no ignition system and in a pinch they'll run on cooking oil. Diesel fuel doesn't aspire to be napalm, and unlike gasoline feels almost natural on the skin. Diesels work forever with...

Christian Williams said:
I'm not a diesel mechanic, but if the fuel injectors have never been serviced it's probably time. Apologies if you've already done it. Not a hard job and due or overdue for any 30-year-old engine.

Small diesels are renowned for their simplicity. They have no ignition system and in a pinch they'll run on cooking oil. Diesel fuel doesn't aspire to be napalm, and unlike gasoline feels almost natural on the skin. Diesels work forever with...

I wonder if you have a bad injector. I remember having this happen on a mercedes diesel car years ago. I recall being able to identify which injector was making the noise and swap back to one of the injectors I had just removed. That solved it.

When bleeding injectors or anything that involves diesel fuel spills...nasty stuff...I use a doggy pee pad which comes in a dozen pack cheap at a pet store or Amazon. One pad opens up and will soak up an amazing amount of diesel or any other liquid including anti-freeze. Open the pad and pack it around the area. If any liquid spills down into the basin??...under the engine...wad up a pee pad, stuff it down to soak up whatever quick and easy.

Moderator
I'd second what racushman wrote, about suspecting an injector. I'd swap an old one sequentially with each of the new ones to isolate it if this is the problem.

Tin Kicker said:
I'd second what racushman wrote, about suspecting an injector. I'd swap an old one sequentially with each of the new ones to isolate it if this is the problem.
Click to expand...

You'll want to source a package of new crush washers before starting, too.

Blogs Author
Maybe go to a Kubota dealer and check that the part number really does cross-check with the right injector for a D850 block?
S

I have found that the sales clerks at Kubota have been dumbed down. They can only find the parts if you know the model number of the tractor you have. I don't have that for the 850 as my boat has the 950. It's available online or some of the members here will have it. I've found that the parts at Kubota are about 1/4 of the price at Universal.

I just Googled "which Kubota tractor uses the D950 engine".

This is what I found:
D950-LA Engine fits the Kubota B7200 Compact Tractor.

The Kubota folks catch on pretty quick with this information and can immediately inventory from any Kubota dealer nationwide.

Moderator
These folks know injectors and have all sorts of cross references:

Have the numbers from your injectors for the call.

Blogs Author
I'll call and do some more due diligence on Monday to make sure I have the right injectors, but I feel pretty confident about that. (edit: which, now that I've said it, means it's probably what is wrong.)

I tried firing up the engine today, got it knocking, and loosened the fuel lines at each injector to see if that would help narrow down if it was a specific injector - no luck. The knocking either kept going or the engine just shuddered to a stop. I ordered a spare injector in the hopes that it'd be obvious which was knocking and do a replacement.

I pulled and reseated all three injectors, one seemed loose perhaps due to overuse of anti-seize, new copper washers in each. Re-bled, restarted the engine, still knocking. Made sure to bleed at the top of each injector as well. Knocking is back to being super consistent.

Is it possible that I'm having a timing issue? I'll check the timing marks tomorrow, which sounds like a daunting task without tiny mirrors or a yoga career.

I'm out of fresh copper washers but ordered more. Not sure if this is a readily accessible thing I could get from Ace or Home Depot. If I had more, my next goal would be to put my old injectors back in to see if the knocking persists.
Last edited: Jun 21, 2020
You must log in or register to reply here.
Share:
Facebook Twitter Reddit Pinterest Tumblr WhatsApp Email Link
Top