Blogs Author
I’m replacing the holding tank, head, and all waste plumbing on my 1984 35-3. When I first pulled the tank, I noticed some delamination at the bottom of the bulkhead and the tabbing was coming up in a few places. I feared the worse, but after looking closer and peeling off what looks like a thin veneer, the plywood below is solid. The veneer was cut away right above the tabbing, so the tabbing was adhered to the plywood underneath. It looks original, but I’m not sure. The plywood doesn’t indent with a screwdriver and it sounds solid when tapped. There are also two screws (maybe bolts?) under the tabbing that go under the platform in the head so I can’t see the back side.

I’m thinking of sanding the area smooth, saturating with epoxy, and glassing in a layer of 1708. I would extend the glass over a new fillet to create new tabbing. I’m not sure what to do with the screws. Should I replace them and glass over? Glass over the existing ones? Remove, glass, then install new over the glass work? 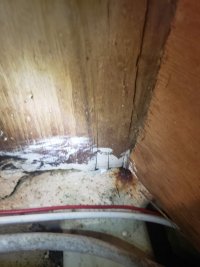 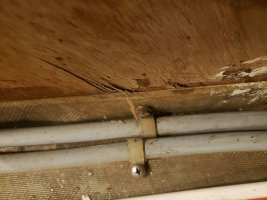 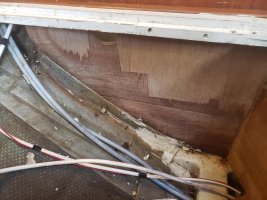 Moderator
Blogs Author
The veneer was cut away right above the tabbing, so the tabbing was adhered to the plywood underneath.

How is the tab attached to the plywood?

It looks--from the photo--that the tab was never glassed to the wood, but only attached by a few screws. If that was the design, the piece isn't structural. Just asking, no special knowledge.

Blogs Author
It's kind of tough to see in the pictures, but you can kind of see it in the second before pic. the veneer looks like it was scored and removed 2-3" above the bottom of the bulkhead before the tabbing was done. The result was the tabbing being applied to the plywood below. I wasn't sure about this until I started pulling it off. It came off clean right above the tabbing. Maybe this means a veneer was applied after the bulkhead was installed? The tabbing is pulling away around the screw heads. Everywhere else it is still glassed firm to the plywood.

Moderator
Blogs Author
It makes sense not to glass to a veneer. If I understand it, not sure this is a situation I'd worry about.

Blogs Author
That would certainly be much easier approach. I wonder how structural this section of the bulkhead is. There's a large angle bracket bolted to the bulkhead and the plywood on the back of the port settee. I'm assuming it's also tabbed on both sides around the perimeter. This seems to be the case in the few areas I have access to inspect.
You must log in or register to reply here.
Share:
Facebook Twitter Reddit Pinterest Tumblr WhatsApp Email Share Link
Top