I took the mast off and have it in the yard getting new rigging while I work on this "little" project. I'm following this guide (http://home.comcast.net/~independence31/core/looksbad.html), but I used this forum and the documents to plan--and knew there would be a steel plate inside here. So, I cut it all out, and that's what I have! A flimsy mast step, and a completely corroded and flaky steel plate. Two of the screws holding the step down completely sheared in half when I unscrewed them (presumably from corrosion--you can see the leftovers in one of the pics). One of the other screws wasn't even hanging on to the step, which means there was a grand total of ONE screw holding the step down onto the plate (that's the one I drilled out). Awesome.

My plan is to go to a metal shop with both the step and the plate and ask them to make duplicates using new material, and to drill a few exploratory holes in the deck to check for core rot (if there is, then I will replace the core). After I polish it all up and make the step flush with the rest of the deck, I'm going to use some thick epoxy to glass the new steel plate in the same spot, then put the step back on top.

Should I still use steel for the plate? Or would aluminum work better?

The step screws seem to be threaded directly into the steel plate--that's something I need to specify with the machine shop, right? Or is that something I can do myself?

What material should the screws be?

Is there anything else I should do while the rig is down to reinforce this spot of the deck? Thanks.
E

I'm the author you reference on the mast step repair. From what you've said, I think you are well on your way. I would follow your nose on this, but the goal is to get back to a solid dry layer that you can then build back up from. I would be inclined to replace all coring with a marine grade ply or equivalent - you want this to withstand compression. With that in mind, I did not have any metal in my construction, but is your metal to spread load across an unsupported area? I'm not familiar with your design hands on. I have a compression post that takes the downward load (near) directly from the mast. As such, the shoe that is mounted topsides is aluminum and my screws just go down into the deck/core below. My inclination would be to replace it with stainless instead of milled steel. Holes being tapped might make more sense after it is installed than before, since you won't know exactly where it will be positioned, and you will want your shoe to be very even side to side in relation to the rig. This can be done after installation with the proper tap for a blind hole.
K

You're article has been very helpful, seriously--thanks for writing it.

As far as I know, I'm not sure what the steel plate is for.

We've narrowed down the cause of the crack to be the jib halyard, which ran to a block attached to the deck on the left side of the mast. Since I have a furler, it has always been tensioned, and applying an upward force. This block was inadequately supported underneath the deck, and so it just wrenched the deck up right there, causing the deck to lower right next to the step--which in turn caused a small crack years ago, and due to neglect, turned into the monster it is right now. Well, it was, until I took my dremel to it.

But underneath, the compression post has actually warped very slightly. Here is a before and after pic of when the mast was on, and when I took the mast off yesterday: 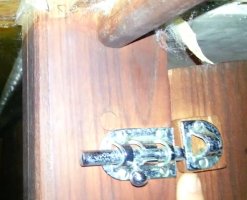 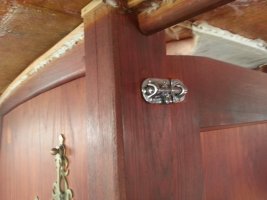 The post has returned to its original position. I'm honestly not too worried about it, since it is only a flex of a few millimeters. But, looking at the underside--I'm not entirely sure why the steel plate is there. The post is much narrower than the plate, than the step, and even the mast. To be honest, I think I could probably do without the plate and just make the step a lot bigger. But I'm a little hesitant to go against the original design, you know? Maybe the engineers had a reason for that.

After talking to some people, I think what I might do is just make a new mast step that is much wider than the previous one. I would then bolt that through the entire deck down to the cabin and put some serious fasteners and backing plates on the underside. The new step would have these hookups (http://pacificnorthwestboating.com/wp-content/uploads/2009/05/starboard-mast-base.JPG) so I could add the blocks to the step instead of the deck to better distribute the pressure.

Any thoughts on this?

EDIT: Here's what I'm going to go to my rigger with.

i concur with everything else you've said about the marine ply.
Last edited: Mar 15, 2014

Senior Moderator
Blogs Author
I would suggest using G10 fiberglass plating for the supporting part, rather than metal.

Not so bad underneath our mast, at least at the deck. However, seems to be mostly powder that was holding it all together: 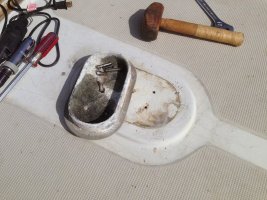 The bigger problem for us was at the other end, where the mast compression post met the hull: 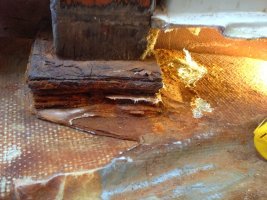 Mostly rust down there, knocked big chunks loose with a hammer like a miner working a coal seam. Taking a break right now, while pondering next steps and getting materials together. Thinking about CPES into the wood support, which seems to still be solid, but extra protection can't hurt down there in the very boggy bilge. Between the hull and the post I plan on layering either sheets of G10 or Structural Fiberglass, laminated together with epoxy.
We're building from the hull up, while you're going from the mast step down. 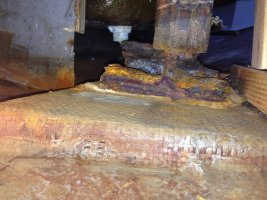 Loren Beach said:
I would suggest using G10 fiberglass plating for the supporting part, rather than metal.

Loren thanks for this suggestion as I’m about to pull the mast and replace my rusting compression plate as well. Did you use the G10 or do you know an Ericson owner who used that as opposed to steel?? If I could get a years later feedback on using the G10 instead that would make my mind up. Thanks

LeifThor said:
Loren thanks for this suggestion as I’m about to pull the mast and replace my rusting compression plate as well. Did you use the G10 or do you know an Ericson owner who used that as opposed to steel?? If I could get a years later feedback on using the G10 instead that would make my mind up. Thanks
Click to expand...

There are several threads here from other owners, and G10 is a great choice. Strength of metal with no fear of corrosion. Our boat has the spar stepped on top of thick "hat stringer", level with the sole. This is more like the 80's Ericson's with their TAFG. Whether a spar is supported by an inside post or is thru-stepped, there is a similar need to have the bottom support equally strong, tho. Even original schemes with galvanized steel eventually will corrode away, in time. Unfortunately. Which makes an FRP replacement look better.

Good point, the ocean isn’t kind to any metal eventually. Thanks! Any best place to buy the G10, and size and thickness it should be?

LeifThor said:
Good point, the ocean isn’t kind to any metal eventually. Thanks! Any best place to buy the G10, and size and thickness it should be?

My metro area has a couple of large plastics suppliers (wholesale / retail) that handle it. Available on the web from https://www.mcmaster.com

LeifThor said:
Good point, the ocean isn’t kind to any metal eventually. Thanks! Any best place to buy the G10, and size and thickness it should be?

Why wouldn’t you want to attach the boom kicker to the mast? Isn’t that what it is designed to do?

LowerHuron said:
Why wouldn’t you want to attach the boom kicker to the mast? Isn’t that what it is designed to do?
Click to expand...

Yes and no. Yes to attaching it to the boom. No to attaching it as low as mine is, which is approximately 2” above the bottom. If one could I think it would be better to attach it to a plate under the bottom of the mast
L

Hmm, please tell me more about that. If we draw a point to imply the center of the mast, I agree it needs to be very close to the back side of the mast, but anywhere from the bast of the mast up to say 1.5-2ft above the mast should be ok.
The reason I suggested not to be to close to the bottom of the mast is that my mast has two cracks from base up to where the boom kicker is attached and I “think” (could be wrong lol) those cracks are due to it being mounted so low.

Senior Moderator
Blogs Author
If your mast is deck-stepped, there might be a problem with the support beneath. This pictured problem sould not be caused by any forces from a boom vang.
Last edited: Wednesday at 6:25 AM

Oh there’s a problem all right. The compression plate underneath is so rusted out that the fiberglass deck has separated and lifted off a quarter of an inch. I am about to get the boat rerigged and replace the compression plate, and possibly repair the bulkheads but hopefully not too much, possibly new chain plates yada yada. It’s been a work in progress since I got her 18 months ago.
You must log in or register to reply here.
Share:
Facebook Twitter Reddit Pinterest Tumblr WhatsApp Email Link
Top