Sadly, last Wednesday I had a terrestrial impact with some rocks off Wing Point in the Sound. A friend dove the next day and I definitely have some nice chunks knocked into my keel, down to the lead.

Exacerbating the issue is that I think I've always thought I have potential keel bolt issues, due to a recurring seam appearing at the keel/hull join, water seeping out of it after hauling, even after a yard tried re-glassing it (I think the seeping water caused the re-glassing to fail.)

Also considering my girlfriend and I have a plan to attempt a Hawaii trip in two years, this seems like a potential time to drop the keel and take a look at whatever bad things are hiding beneath (hopefully nothing).

But, this is a very expensive endeavor ahead - I'm guessing at least $10k, if not more, if I have a yard do it. I really don't think the keel is in any imminent danger of falling off of the boat, but the stakes get higher if we take it offshore. And now that I've mentioned it to my gf, she will need some sort of strong assurance that the keel is going to be OK - either via repair or some expert opinion that the bolts are sound.

So there are some options:

Along with this are options to either file an insurance claim or prepare for an out-of-pocket hit. I'm not sure a full keel drop, repair, re-bolting, etc would be covered by my policy without totaling the boat, which I would really like to avoid. Whatever way I go, the keel damage makes this a sooner-rather-than-later project, though not ASAP. 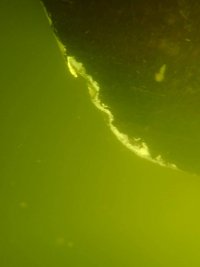 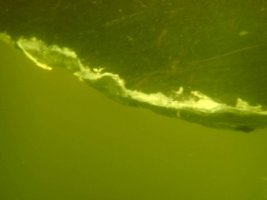 It's never fun to run aground, but most of us have done it at least once for various reasons. They say it's not if, but when you'll run aground if you are a real sailor!
I know your friend checked the keel under water, but have you or anyone also checked the lamination under the floor boards for any structural damage? Although that's unlikely, it is possible if you hit rocks with significant force. Also, though unlikely, is there any damage to the rudder?
I know that some insurance companies will cover such a collision, so it would be worth exploring that, as dropping the keel is not cheap, as you know. But for peace of mind, and reassurance for your girlfriend as well as yourself, dropping the keel and fixing it properly may be the right thing to do, especially if you plan to go offshore in a couple of years.
Frank

Blogs Author
Well, from the picture, that looks like a minor scrape. Looks like you lost more paint and barrier coat than lead. My keel had a bigger gash in the leading edge when I bought it, from the PO trailering it in the off seasons.

The keel repair from that scrape will be a cheap and easy fix, but of course it's worth investigating for unseen damage. I'd start with your insurer, and see what options they present. They may actually require a certain level of inspection, to know what future liabilities they face in covering the boat.

Moderator
Blogs Author
My vote: 1. I haul out at the DIY boatyard and fix/fair the keel damage, assess the state of the keel seam/weeping, likely just put the boat back in and ignore the keel bolts.

You can fix the lead keel with a hammer and filler.

Senior Moderator
Blogs Author
It's been years since I had our keel dropped and re-bedded, but even adjusted for inflation the cost was hugely less than 10K.

You should get some bids. Note that experienced yards will have a welded steel 'cradle' just for the purpose of solidly supporting a keel when the boat is lifted off of it.
W

I would try to get the insurance company to pay for the keel drop. It is in their best interest to make sure all damage is repaired or they might have to pay out for the whole boat if the keep drops off in the middle of the Pacific!


Anyone can run aground, even professionals. I was on a 700 foot container ship that grounded in Charleston Harbor when a Submarine forgot the rules of the road. I was not on the bridge, but I heard the chain running out of the locker from the officers mess and felt the screws go full astern popping us up on a sand bar. You are in good company!

Lots of strong opinions on the following, but here ya go:
4. Carefully inspect for leakage from inside hull to keel joint (flood as needed; food coloring?). If not leaking gain access to ALL keel bolts, carefully inspect nuts/washers/surrounding, and re-torque. I got almost a turn on one of mine a few years ago.

Do lead repair as above and go sailing.

Blogs Author
I'm looking through the 32-3 manual and not finding it - is there a diagram of where the keel bolts are on a 32-3 anywhere?

Moderator
Blogs Author
We have a thread on this somewhere. Meantime, here are some photos of an '85 32-3 with the floorboards up. Keel bolts are in some bilge compartments. 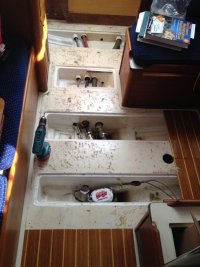 As I recall, the most-forward keel bolt is hidden. Access to that on my boat was through a square hole sawed into the TAFG wall in the shower bilge area (photo below). It took a flashlight to see it, and I think there was a top hole providing entry of a wrench. That bolt took some detective work to find. 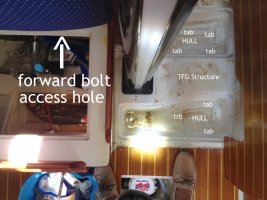 The pictures look like mostly fairing issues. Unless there is evidence of damage/cracking up where the keel meets the bottom of the hull I wouldn't worry about it. With an older boat, chances are good someone has hit the same spot before and what got knocked off was the old repair (which more that likely was something like bondo).

My understanding is there is pretty much always going to be some water that seeps out of that seam between the keel and the hull.

Unless the keel bolts are leaking water into the boat, I don't see a lot to worry about.

As someone pointed out to me recently -- when was the last time I heard of a keel falling off a boat?

These are among the many previous threads on this topic. In 2009 we dropped our keel due to a similar problem. Total cost $2500. If you are crossing the Pacific you definitely should drop the keel, inspect the bolts, rebed and secure the bolts. My choice is 3M 4200. If you use 5200 you will have a nightmare trying to remove the keel after a future incident. Hopefully your bolts are all in good condition. But if not, now is the time to address it.
Mike Jacker

I just bought a Ericson 32-3.I hauled the boat for the season. Im planning to check the tourque on the keel bolts but I cant find the forward keel boats, and assume they must be under the mast. I have not been able to find any location of the spec sheet, owners manual ect. Anyone know for sure...

Looking for advice on repairing a slight crack at the keel to hull joint on a 1984 Ericson 30+. Heard conflicting info from a few boatyards. Should I drop the keel and rebed, or glass over, or ..... Any advice would be appreciated!

I know this topic has been raised dozens of times on various different discussion boards and mail lists, but I never felt satisfied with the conflicting information I received. I now have a maintenance question about my '84 E-38 so I'm hoping to get some answers from 80's vintage Ericson...

Blogs Author
Well it took a month of insurance bureaucracy, an insurance survey, and then the surveyor allegedly getting pancreatitis, but I got a confirmation from my insurance that they're going to cover the keel fix, keel drop, and mast step. That's a lot of fundamental work - I miss my boat, but it'll be a very productive haulout.

Congrats on getting back in the water! Just in time for this fantastic weather. How'd the keel work turn out? Any issues with the bolts?

Congrats on getting back in the water! Just in time for this fantastic weather. How'd the keel work turn out? Any issues with the bolts?
Click to expand...

Thanks! I’ve been cruising the last two weeks and have been having a great time.

The keel had no significant issues or problems with the bolts, I am TOLD. Unfortunately the yard worked at their own pace and I wasn’t able to get pictures of them, despite asking multiple times. This is the “nice” yard here, though, so I guess I’ll take their word for it. Everything is fixed and faired and looks brand new. 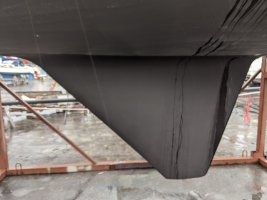 They filled the seam with Sikaflex 291(?) and glassed over that.

In the end, Geico covered everything as part of the running aground. I paid my own money for engine work, standing rigging, prop and such, but the keel rebed, mast step/unstep, and fairing/sanding of everything was covered to the tune of about $11k on a $12k yard job (minus tax and depreciation).

Blogs Author
Looks like good work. Which yard is the "nice" one?

Senior Moderator
Blogs Author
Are you insured thru BoatUS --> Geico , or directly with Geico?

Loren Beach said:
Are you insured thru BoatUS --> Geico , or directly with Geico?
Click to expand...

BoatUS Geico. They were overall very nice to work with but the surveyor they chose took an extra month to get the report out (got pancreatitis was the excuse)

@trickdhat I used CSR, which I think is short for Cash, Spending.... revenue?

Geoff W. said:
I used CSR, which I think is short for Cash, Spending.... revenue?
Click to expand...