Need ideas on paint for my boat

Blogs Author
My boat had a lot of small blisters and only a handful of large fluid-filled ones. The vast majority of them "opened" and faired flat in the process of sanding down to the gel-coat. Except around the few large blisters that needed to be filled, I didn't remove any extra gel coat. I sealed the hull with several coats of Interprotect 2000E and after six years, there are no new blisters.

That said, there were a few new blisters just above the waterline in the "boot stripe" area, which I had masked-off and did not seal during the big re-finish. Now, it seems obvious that I should have treated the area near the waterline as wetted area, and run the IP2000 all the way to the top of the boot stripe. Which would have covered up the original translucent gel coat of the stripe. Re-establishing the stripe might have been a little tricky.

This last haul out, I ran the bottom paint an inch or two up into the stripe, but it did not adhere well and has already flaked off, so there was no benefit to that.

I was just following the directions, but now it seems obvious: If an area has blisters, it needs treatment.
S

Fairing, sand, fairing again.. until you get a smooth surface... I'm on the process to varnish all interior wood today. I'm using varenthane, oil based basically because it's just a couple layers and that's all.

They go all the way from below the tail to the boot stripe, but it sounds like maybe I can just take down the parts of the original gel coat where the blisters are and leave the parts that are holding up alone?

To be clear, I have fixed blisters below the waterline. It’s above that gives me pause because it will lead to painting.

Moderator
Blogs Author
If you have the hull professionally painted all that will be part of the deal. It's just surface prep for the pros. And of course a hull job is expensive.

You could certainly fill and fair yourself, it's getting the new patch gel coat to match the old gel coat that's hard. If you;re thinking of doing spot repairs, post a few pictures. Some have done similar jobs and can comment.

I will take some pictures. A professional paint job will probably exceed purchase price and as we careen into a depression, my government salary has been frozen so I have more time than money at the moment. I could probably ignore for a few more years. I always get this way this time of year but I launched today so I’m sure I will calm down about it as soon as the sails go up.

Blogs Author
One of my friends from college started the TotalBoat line of products. His is the same family that operates Jamestown Distributors. He is indeed enthusiastic about getting their products in front of people on-line.

Jamestown Distributors was doing on-line how-to videos before Youtube was even a thing. They are committed to the TotalBoat product line and trying to gain market-share.

So far I have generally heard good things about TotalBoat, but indeed they do push. No other way to displace well-known brands.

When looking at professional repainting, also look at truck re-painters. I mean those guys that repaint semis. These guys paint ten times the amount of paint that any marine sprayer does at a small fraction of the price a marine shop does. Taking the mast off and trucking it to the semi sprayer can pay big time bucks even after the cost of trucking. Marine sprayers are no bargain and I might put them in the rip off category. The airplane guys feel the same pain.

There are several posts on this subject buried in this site. I have sprayed several boats up to 26'. the labor, materials and profit do not make up a small fraction of the marine sprayer's charge. We are captive therefore we are fleeced.
F

supersailor said:
When looking at professional repainting, also look at truck re-painters. I mean those guys that repaint semis. These guys paint ten times the amount of paint that any marine sprayer does at a small fraction of the price a marine shop does. Taking the mast off and trucking it to the semi sprayer can pay big time bucks even after the cost of trucking. Marine sprayers are no bargain and I might put them in the rip off category. The airplane guys feel the same pain.

There are several posts on this subject buried in this site. I have sprayed several boats up to 26'. the labor, materials and profit do not make up a small fraction of the marine sprayer's charge. We are captive therefore we are fleeced.
Click to expand...

Another option might be to paint the boat yourself. I have painted two boats, prepping carefully and then applying two coats of Interlux Brightside enamel paint with roller and brush. Both turned out great, and looked good years later.
It does take some time, but cost is minimal.
I haven't read all of the posts above, so apologies if someone else has already suggested this.
Frank
S

Bottom paint is fairly easy if you have the stamina or you can pay a couple of external helpers. No that bad at all. Deck and sides are a different history basically because they involve a lot more work and detail. But bottom paint, even "going down to the fiber" it's not that hard and off course, it's the perfect opportunity to share some beers, coke, ron, pizza, and friendship...

Bottom paint doesn’t scare me a bit because once you put it in the water nobody can see the imperfections. It’s when you get up in the white and stripes that I get nervous. I can’t see spending more than I paid for the boat to paint it. But again, once you’re in the water, all the problems get a lot more blurry. 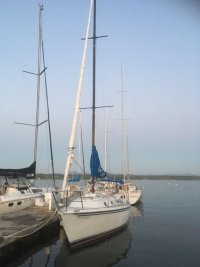 Senior Moderator
Blogs Author
Strictly in the "FWIW" dept, over the last 20 years we have had quite a few club members repaint their topsides and decks on older (i.e. pre-1980's) sailboats. I know of two members doing a roll-n-tip, at least one other that had a local yard use a one-pack epoxy paint, and the others were all hauled out for professional spray work. Some of the pro jobs were poor and after 8 or 9 years are not holding up well --- one was done by a truck painter and reportedly cost half what a yard would charge but was worth less than that, IMHO.

At least 5 boats currently in the moorage were painted by a pro painter/ship wright in his enclosed shop, and his work typically looks "like new" for over 20 years. Not inexpensive, but his normal process is multiple color coats and then multiple clear coats. Only a few new boats have gel coat that look that good. And ten or twenty years later that shine endures.

It is OTHO going to always be about three things: 1) Protecting the underlying FRP from UV detonation once the original surface layer of gel coat is too thin/gone, and 2) restoring the original appearance/shine after decades of repairs and divots.
And of course, for #3) there is the question of Money.... if keeping the boat for over ten or twenty years, major restoration Will amortize out in use and pleasure.
Purely Subjective... yup, 'tis true.

And, when selling, a great looking boat will sell much much faster than the other 95% of similar-age craft. Given that "time is money" this can be significant in a crowded market of used boats. I have watched owners spend over a year agonizing over the lack of interest or offers on their used boat that looked too much like a fixer-upper, even boats that were in decent condition underneath. (sigh)
And the tired-looking boats keep racking up slip rent and insurance payments, and any tired-out systems stop functioning reliably... which further scares buyers away.

Obviously, this is a one-cent opinion, after the usual discounts apply.

ps: the Ericson in reply 52, looks like a handsome & debonaire version of a "wolf among the sheep" !

Sailingfun said:
Yes, I removed all hardware... I want to install new self-tailing winches and traveler so I removed all. Yes, I use fairing compounds to cover the 2 million holes big and smalls in front. Also, I found my Ericsson has a hollow front so I fill up with structural foam. then, I replaced all front hatch and windows (those plastic old ones look horrible!!). I'm in the process now to replace the rest of the windows for plexiglass, then, I gonna be ready to start the painting process. First, a couple of layers of primer (or until I use all I got it), wait period between primes, between 3/5 days. Then, anti-skid (2/3 days more) and final coat in between (another 2/3 days). Then, reinstall all hardware on deck and move at the interior (paint everything, including all wood) and start the wiring process. I think I'm about one month of finishing and move the sailboat to bottom paint.
It's a long and slow process but well... I think for July will be ready to use it or sell it...
Click to expand...

Removing all of the deck hardware is certainly time-consuming. We are in the first part of this process now. Amazing how many holes there are. And all will have be over-drilled and epoxy-filled and re-drilled. Please post up some pix when you can.
I plan to add some blog entries, as time goes by.
(Nothing like a 'pandemic summer' to change one's boating priorities....)

If one is using a single part topside paint, would it make sense to remove, paint just around the hardware base, and then rebed the hardware. Then paint the remaining open parts? I realize that would add more sanding prep to join old and new but would keep the boat non functional for shorter stretches? Or just remove it all and do it? I did the epoxy fill routine for most all of the holes, so that part should be quick. Ok, don't laugh

Senior Moderator
Blogs Author
As the news folks say: "this just in..."
I sent this thread over to some friends just taking a break from cruising their Cascade 36. They just put it on the hard for the hot summer season in Mexico, and plan to return to it and continue cruising this fall.
I knew they had carefully chosen their non skid when they completely repainted and upgraded their boat, and thought they might have a comment about it.
Here is Bill's reply:
"Yes, we used Durabak 18 on Gypsy’s non skid. We are very satisfied with it. After five years it is holding up well. The two great things about Durabak are:
1, it is great non skid. Off shore, working on a wet deck, your footing is secure in shoes or bare feet.
2, it is comfortable on bare skin. No worries about scrapped knees, elbows, legs or feet. "