Hello All, I plan to do some offshore sailing this spring in good weather so I am looking at what is currently available in rafts in addition to the other emergency/safety offshore gear that is needed.

In our previous shared boat arrangement, we had a membership on a Oceanus 38.1 we had an emergency quick inflatable life raft which was rated as a "coastal" raft, rather than one rated for "offshore". These types of life rafts have their advantages in terms of storage space but I wonder about their reliability. They are not cheap either (esp for the offshore one).

Next option might be to strap an inflatable dingy on the foredeck. I am not sure this is possible on my boat, due to the setup of the jib.. A dingy might also have the possibility of powering it (or maybe even sailing it with a telescopic rig ? - just an idea). Drawback is that it is probably not as safe/stable as a rescue raft.

Standup paddle boards with a survival suit is another idea that crossed my mind. Maybe a survival suit is a good idea anyway whether you have a raft or not ? I'm sort of in the idea stage here on this so any of your thoughts appreciated. If we leave the bay for any great distance, it is likely single hand or with one other sailor - so we need a 2 capacity solution. (which I'm hoping would be a helicopter but can't depend on that in a hurry)...

Moderator
Blogs Author
Owning an emergency raft is not something I'd do again unless heading off for a year or more. Reinspection expensive, resale value plunges as date approaches.

I'll try renting a raft next voyage. And renting a satphone, too (contract is required to keep them operative.)

A self-inflating raft is definitely a confidence booster, but is that better than an inflatable ready to go on deck on deck? Or even a pram? Looking back, pram-as-lifeboat now seems a pretty good joke. I guess I knew that even at the time. 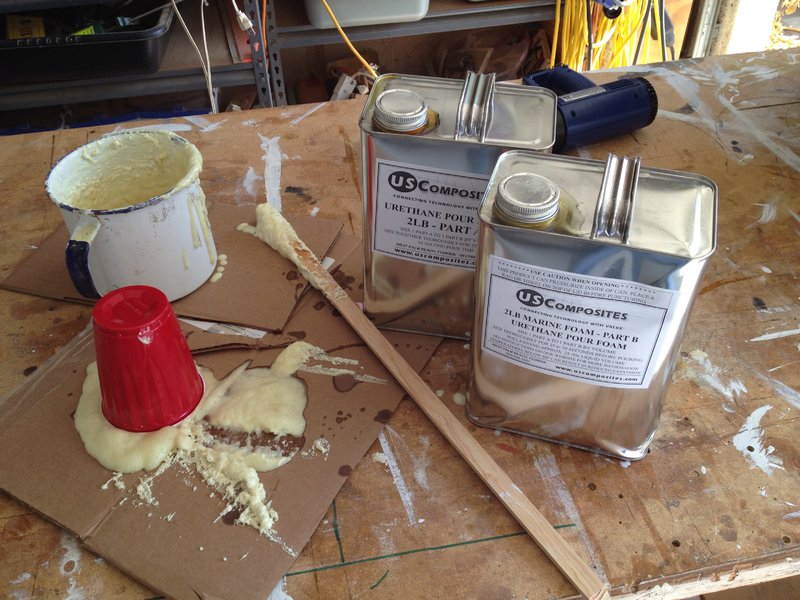 E32-3 - Flotation for the Eastport Pram

A good dinghy needs to serve many masters. I have no inflatable or outboard. No emergency life raft, either. So my 60-pound mahogany plywood Eastport pram needs to be a jack of all trades--sailboat, tender and one-man lifeboat. I wouldn't give...

Christian Williams said:
Owning an emergency raft is not something I'd do again unless heading off for a year or more. Reinspection expensive, resale value plunges as date approaches.

I'll try renting a raft next voyage. And renting a satphone, too (contract is required to keep them operative.)

A self-inflating raft is definitely a confidence booster, but is that better than an inflatable ready to go on deck on deck? Or even a pram? Looking back, pram-as-lifeboat now seems a pretty good joke. I guess I knew that even at the time.

E32-3 - Flotation for the Eastport Pram

A good dinghy needs to serve many masters. I have no inflatable or outboard. No emergency life raft, either. So my 60-pound mahogany plywood Eastport pram needs to be a jack of all trades--sailboat, tender and one-man lifeboat. I wouldn't give...

So for a passage would you would rent a self-inflating raft, instead of going with an inflated dinghy on deck?

I have wondered about this question too.
I guess the small form-factor of the self-inflating boat is the big advantage.

But what if you wind up anchored somewhere? Then you want the dinghy-on-deck, no?

Even to this novice flipper-of-Lasers, the pram-as-lifeboat scheme seemed at best optimistic.

Blogs Author
I had a 6-person coastal raft for years out on the foredeck. Most rafts would have a shade or tent-like feature to shelter from the sun and rain, not to mention a standard set of emergency gear that varies with the type and rating of the raft. But, most rafts wouldn't be as good for rowing or paddling as a dinghy. I think we paid for three inspections over the years. They are expensive to maintain and we eventually had a retirement party for ours and it inflated just fine despite the "C" grade it was getting from the inspectors. It was probably 20 years old.

Moderator
Blogs Author
The good thing about an emergency raft is how compact (and heavy--60 pounds) it is. The bad thing is you plan to never use it. So you also need another dinghy too, to go ashore. 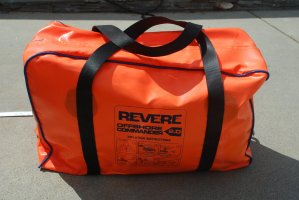 For anything but true offshore, I'd say an inflatable on deck ought to be fine. It sorta depends on whether you have family or crew aboard, feel like you need to keep them safe in a disaster, and so on. When it's just you, it's easy to play the odds.

Blogs Author
One thing of note, in my own research it seems that inflatable life rafts go for anywhere from $40-60+ a day. If I were to rent one for the 2-3 months I'd take off to do a Hawaii round trip, I may as well buy one at that rate. I think the rental market is really meant for race crews who plan to be there in a few days and home shortly thereafter. I'd be happy to find out otherwise.

Moderator
Blogs Author
Yes, sounds like duration is the key. And it ain't a bad idea at all to carry a rescue raft at all times--just maybe overkill.

I find it useful to consider the fairly rare occurance of yachts sinking on the popular Hawaii run. OEX did during the Transpac, and the crew were in life rafts when Pyewacket arrived. But race boats going 20 knots are much more likely to suffer fatal collision damage than we are.

Most rescues are from disabled sailboats, or because of disabled crews. With satellite communication, an SOS to the USCG from far offshore usually means a commercial ship is diverted. They are remarkably successful, given the difficulties of a containership boarding passengers from a small boat in heavy seas. Helicopter rescue is limited to coastal situations.

Given your report on rental prices, I'll probably buy another rescue raft for the next trip. Anything you can do to ease the overactive imagination of family members helps.

One key issue is where to stash raft on board. The "valise" style needs a dedicated cockpit locker. Digging it out of the back of the quarterberth if the boat is on fire is not likely to be a tenable option.

IIRC, one of the main differences between the "coastal" and "offshore" rafts is an inflatable floor, vs just a thin sheet of material. Depending on where you sail, this could make a huge difference in thermal exposure. Of course, I suppose one could put an air mattress in the ditch bag...

During the Safety At Sea seminar, there was also some discussion of the raft size vs crew size. Not an easy issue. A boat that can or sometimes does carry six people ought to have a six person raft, no? But there were numerous reports that one or two people were insufficient ballast for these rafts in rough weather, and this resulted in capsizing and tumbling rafts with people's heads knocking together and worse. It wasn't clear to me whether it was really a ballast issue or just sea states exceeding design parameters. But the thorny proposition was that different voyages might require different rafts. Which would seem to give an advantage to the rental scenario.

Edit: Now that I think about it, I think what they were saying was neither of the above, but that the design assumes that crew will be packed tightly into the raft. If there is too much room, so that bodies can tumble around, injuries can occur.
Last edited: Nov 30, 2020

We have a 6 person coastal raft that was a requirement for one of us on the boat. It is in a soft case stored in the saloon jammed between the mast and settee. it is very heavy and doing a great job holding down the sole panel. Without it we would still be in Galveston Bay.

Our inflatable dinghy is carried upright and ready to float off the foredeck should the boat sink. No argument that I can come up with will move the life raft out of the saloon.

I seem to recall that Beth Leonard and Evans Starzinger thought that life raft money could be better spent making the boat more seaworthy.

I also seem to remember that they substituted a life raft for full immersion suits that got used quite regularly. In a sinking boat situation they considered a piece of equipment that was used regularly to the point of familiarity to be more valuable than a never used life raft. Interesting out of the box thinking.

Like everybody, we carry a boat EPIRB and PLBs that broadcasts to the same S&R centers. While I think that is well and good, it does nothing for the person remaining on the boat to find and rescue an overboard crew. So on watch change we also hand off a PLB that broadcasts on AIS. It also alerts on our DSC VHF when activated It makes sense to me in theory, I hope we never test my theory.

When I think of it, our inReach and IridiumGO also have SOS buttons. Crazy. Gone are the days of losing yourself in the world.

in 2017 Lisa had a doctor appointment and in 2020 did a telehealth doctor visit exclusively to put together a medical kit. The doctors asked a lot of questions both trying to understand what she was asking for and then to understand what any special needs we might have. The doctors wrote a bunch of prescriptions and gave us notes on how/when to administer the medications. I can't be completely sure, but I don't think we've dipped into any of the meds yet.