Blogs Author
Looking to see if anyone has info on Filucy Bay and anchoring in the general vicinity. I've consulted the great cruising guides around but looking for anyone's experience here, as well.

Looks like tides will be perfect tomorrow to go screaming through the Tacoma Narrows passage, with enough flood leftover to scoot around Eagle Island quite quickly. Should be fun.

Looking at the charts, it's about 40-50 feet deep in the center which I couldn't swing a good scope on with my limited rode. I see the outsides look a bit shallower - any issue with anchoring there?

Also, I hear the South Sound is jetski party central. Can I expect any semblance of seclusion at Filucy?
L

Live on fox island so know s sound fairly well. Don’t know this bay well but my guess is it’s much quieter than just north at Penrose area. Activity is hit and miss but the general area has lots of waterfront residences so with that comes full spectrum of water activities. On other hand quiet enough to support 100% sightings of seal and porpoise—-sometimes more.

Hope you you have a great trip. Will look to see how went

Blogs Author
Filucy Bay was a great trip. Tides were perfectly such so that leaving Eagle Harbor early in the morning I had to fight Colvos Passage slightly (-1.5kts) but once I hit the Narrows I was doing 9-11kts speed over ground. Zooooom!

One thing I thought was interesting was the amount of tide rips and whirlpools throughout, not only at the start and end of Colvos Passage but also around McNeil Island and near Toliva Shoal. There wasn't very much wind so conditions weren't scary, but the bow definitely was swinging all over the place going through some areas. Got bulldogged a little bit by what must've been a prison guard boat near McNeil Island...good reminder not to get too close.

Filucy Bay itself is nice and quiet. It reminds me of the water equivalent of a secluded county park - the ones that let you camp, but are basically just a grassy patch and a picnic table, no facilities or anything. It was basically a nice quiet bit of water, depth 15-20ft throughout, with good mud holding and no other boats except a Bayliner that showed up later and parked far away from me. Nice to dinghy around. Near the end of the flood, the bay did accumulate a lot of the seaweed and other flotsam that got pushed all the way back and had nowhere else to go.

Headed home the next day we woke up a little late to catch the most of the favorable current, but we DID see a group of four Orca whales! Headed home from Blake Island we saw the schooner Zodiac beautifully framed by Mt. Rainier and did some light air sailing for a few hours before motoring in and home.

Overall it was about 35nm both ways. Lovely trip, easily a single-day journey if you have the tides like we did.

Also, why are my pictures correctly rotated on my PC but not online? Kind of frustrating. 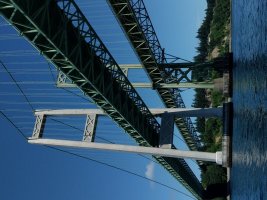 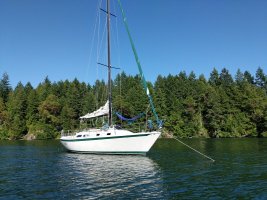 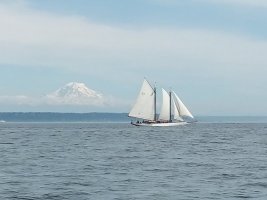 Blogs Author
Thanks. Nice to see posts like this.

Senior Moderator
Blogs Author
McNeil Island Penitentiary was closed in 2011, per a wiki entry.
Said to be deeded over to the state.

Blogs Author
You'd think that alone would be enough to keep people away...

BITD when I worked at the Lazy-H Ranch, the Hanford Patrol helicopter ("Airwolf," of course) would often follow me as I rode my bicycle through the desert. They were pretty bored. The flight program was cancelled shortly after that, after 40 years of flying around for nothing.
You must log in or register to reply here.
Share:
Facebook Twitter Reddit Pinterest Tumblr WhatsApp Email Link
Top