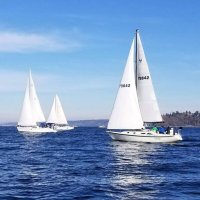 This weekend was the area's premiere (and only) liveaboard-exclusive sailboat race, put on by Sloop Tavern Yacht Club out of Seattle. Some 36 odd boats signed up at 34 made it to the line, a unique assortment of mostly 40+ foot boats that aren't out in any competitive capacity most of the year. It's a nice change of scenery from the Farrs, J-Boats, and other usual suspects on the race course. I was stoked to see a Valiant 42 out there, which is one that I've been eyeing as a someday maybe type of boat...but that's a different forum

The race was standard PHRF, split into classes, and I raced non-flying sails in the very first start. At the start the wind was blowing probably 8-10kts from the north, ambient temperature was in the 50s, and the sun was shining. Glorious. The course had 4 marks and was an uncommon reach-y layout, as a lot of races here are north/south focused. Overall it was an upwind leg, a reach west, a reach east, an upwind leg, and a downwind finish. 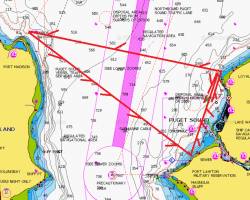 We pretty much hogged the line on starboard tack in the last minute and a half to the start and even made one guy have to tack and miss the start line (sorry!) which *might* have been a bit more "eye of the tiger" than was necessary for a liveaboard race, but we crossed the start line first and at speed. The rest of our fleet tacked into shore for some reason, and we went out by ourselves to take advantage of the stronger winds and favorable currents. This paid off big as we were well ahead of the fleet in crossing the Sound until the westernmost Point Monroe buoy turned into a huge wind hole and we bobbed while the rest of the fleet brought the wind to us.

Nothing will take the air out of your sails like a bunch of 40-50 foot boats to windward, so we sat in everyone's dirt until we caught enough breeze to get going - by now we lost our early lead and were neck and neck with a Hallberg Rassy 42 in our fleet. They rolled me, and then I came up, got boatspeed, rolled them, and we had a nice little dance with each other back across the Sound. They took the southeastern Ballard Mark pretty wide and tried going back in to shore again, and we cut the buoy tight and went back out into the wind, gaining a few boat lengths back on them.

Generally, my 32-3 seemed to do better to windward than the Hallberg Rassy 42 was able to do. They tried tacking on top of me, but they miscalculated and I got above them anyways, so we simply pointed higher, went faster, and gained a big lead on them during the final windward leg. A faster boat in a different class came along and squatted right in my breeze so I made a very misguided "tack out and back" maneuver to get out of their dirt and lost a lot of ground.

Our final mark rounding was the best maneuver of the race - I started the turn early enough to make me nervous about making it, but the boat slid just far enough and my crew executed the tack perfectly. We gybed immediately after rounding and pulled my signature wing-on-wing maneuver to the finish - the HR42 kept trying to roll me from behind but never could make up the ground. Close finish, though - they finished 27 seconds behind me!

We cross the line first for our start, and got first in our class 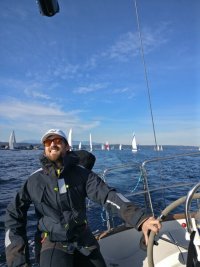 I'll say it again, the Ericson 32-3 performs remarkably well for its rating (in my experience) and is a great boat to do these sorts of races on. It goes upwind like a dream in light-medium air and is agile and responsive against many similar boats. I didn't write a report for the last race I did, but this is our second time winning first-in-class in the last month, as we also won at Sloop Tavern's Fall Regatta. That time we won a drag race to the finish against a Swan!

Someday I'll have that 'chute and have to graduate from non-flying sails to the "big leagues"!
Last edited: Nov 4, 2019

Is that the new headsail? Looks very nice...

Is that the new headsail? Looks very nice...

New headsail AND new main! Both are very nice, though I still can't quite figure out the best sheeting angles for a 135% genoa on my inner track. Almost seems like it needs twingers or something for reaching to close the leech...but I barely know what I'm talking about.

And my only retrospective regret is not getting a bigger roach on the main, but at the time I felt like I was getting overpowered so easily that the bigger main wasn't necessary if it was just going to be depowered all the time.
You must log in or register to reply here.
Share:
Facebook Twitter Reddit Pinterest Tumblr WhatsApp Email Link
Top