Got to meet Ron Holland virtually at talk he did for the Sausalito Yacht Club tonight. I am not a member of the SYC but their presentations are open to the public. His talk covered aspects of his racing and superyacht design career with plenty of room for questions (and I asked a few and made sure I included a plug for the Ericson 33RH which he responded with approval).

I believe they said the talk will be published on youtube and I'll follow up with a link if anyone is interested when it comes out. I grabbed a screenshot of the title slide with Ron on the left with part of the audience.. I somehow managed to get in the little window below Ron. I'm not sure if that is just on my interface or if the fact that I'm a groupie and showed up 20 minutes early 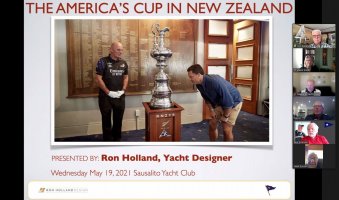 Very cool, Kevin! What questions did you ask him about our boats, or do I have do wait for the video?

Keith Parcells said:
Very cool, Kevin! What questions did you ask him about our boats, or do I have do wait for the video?
Click to expand...

There were a lot of people in attendance so I didn’t want to ask a question that was too off topic . I asked him about what some of the limitations were with computer aided design technology- since his studio was an early adopter. Then I just casually mentioned that I was an Ericson 33 owner, which he acknowledged. There were also a few owners of Swan 411’s in attendance that asked questions and did the same thing as I did . He was quite an interesting speaker .
You must log in or register to reply here.
Share:
Facebook Twitter Reddit Pinterest Tumblr WhatsApp Email Share Link
Top