Blogs Author
My stereo has (apparently) given up the ghost. It shows every appearance of working - tuner works, track info from iPod works, everything works... just no output, not through any speaker, and not thru headphones.

I called the vendor's technical support this morning to ask if there was any sort of reset-to-factory-settings or self-test I could invoke.... he said the amplifier power chip had likely gone out. "it happens". And said it would cost more to fix than it would to replace.

So I'm in the market for a new stereo head-unit. Nothing fancy.... AM/FM receiver, USB input for iPod, 4-channel (front and rear pairs) output, and made for a "single DIN" enclosure. That's all I really care about. Bluetooth would be fine, I don't use Pandora, don't need it to play CDs.... but bonus points if it is tolerant of a marine environment. Mine is in an enclosure in a very protected place, no way it could get splashed without some serious effort, but... it's still a marine environment.

Anyone have a stereo that they really love? I know some places sell (for example) "fusion" brand, which is supposed to be tailored for marine use, but... not sure if the price is worth 2-3x over a feature-equivalent car stereo from Car Toys. I've historically had good luck with Pioneer and Kenwood in the past.... leaning that way unless someone has better ideas.

Blogs Author
I got this one: https://www.amazon.com/gp/product/B07717WCVN/ref=ppx_yo_dt_b_search_asin_title?ie=UTF8&psc=1

And it's worked perfectly fine for me so far. It's in the liquor cabinet. Only complaint would be that the Bluetooth doesn't seem to connect from behind the wheel down all the way into the cabin, there, but I don't think that's a head unit problem.

It also allows me to easily forget I left the iPhone aboard, and have to drive back for it the next day. 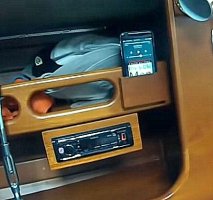 Blogs Author
I got the cheapest, smallest Fusion stereo. Happy with it so far. Mostly just play tunes from the iPhone through it. Cheaper in the long run than throwing away another Sony every year.
It really is a sealed waterproof box, like the VHF, unlike a car stereo. (The WM-branded Sony's are supposed to be "marine" because the circuit boards are "conformal coated." Pffft. Throw them away every two years.)

You can also hook "Fusion" units up to the NMEA2K bus (if present) and control them through most newer MFD's. So if you have one of those at the helm, you can adjust tunes from there.
D

This guy from any marine store. After going through a long series of "Sony" etc. car stereos on the race boat, each of which lasts a season maybe, I put this cheap thing in my E35. It's perfect. What makes it perfect (besides being cheap) is that it is SUPER EASY to pair to a phone or other Bluetooth source. No list of drill-down menus to put it in pairing mode.. just hit the button. That's a real benefit not just for you directly, but for when you have guest who can figure it out themselves and not involve you having to leave the helm to help.

Liked it so much it is now the official. radio on the race boat too.

What I haven't done is used any "marine" speakers. I just can't bring myself to cut speaker holes in the cockpit. I don't mind cutting fiberglass, just don't like the idea of a thin speaker cone being the sole barrier between my quarter berth and potentially tons of green sea water in a storm. Is that silly?
I have a decent rechargable blue-tooth portable speaker I use on deck as needed, and nice wall mounted speakers below.

Bruce I went through the same dilemma last year.

The PPO had put in a very marine stereo system with large speakers in the cabin and removable remote speakers for the cockpit. Stereo gave up the ghost and I got tired of storing and messing with the 90's vintage speakers so I just did away with it all.

I had just rewired the cabin to add several dual port 12v outlets with both cigarette lighter and USB port outlets (tired of 3 women on board fighting over who gets to charge their phone on the one 12v outlet I used to have). I now have 2 in the main cabin port and STBD, one in the v berth, and one at the nav station/qtr berth.

So I just went out and got a nice JBL portable Bluetooth speaker. Everyone on board can link to it and take turns playing whatever they want from their phone, Ipod, tablet, whatever. I can even link it to the little portable DVD player I bring which has crap for speakers. While running in the cabin it can be plugged into the 12v outlets to stay charged. When we want it outside, it sits on the cabin top under the dodger, out of the weather and projecting the music back into the cockpit. Battery lasts several hours.

Nice thing is when we aren't out sailing or over the winter I just take it home. So no corrosion problems from sitting on a boat all winter.

So the only question I have now is what do I do with all the old cassettes and CD's I used to have on board from the previous stereos?

I have one in the kitchen. I gave them to two of my kids for Christmas.

Never mind messing with the vast bank of stereo junk in the living room, unless for vinyl.

These things work, and for the price the sound is almost superb.
Last edited: May 15, 2019

Blogs Author
As it happens, I dismounted my old Sony "Marine Stereo Speakers" today. Although they were only mounted inside the cabin, the cones are cracked and distorted and preparing to fall apart.
They have been the weak link in the system for some time, and now they are OFF the boat. Maybe I'll take my business to Fusion. Since I was preparing to build new cabinets at the speaker locations, now everything needs to be re-thought.
This could get dangerous... :nerd:
M

I do not like to listen to the radio when sailing because I'm too deaf to cope with the background noise, radio and talking to guests.

For those delightful evening dinners on the boat we do have a Bose SoundMini speaker with tunes provided from the iphone.

Since the radio reception varies with the tide an app like KQEDs provides live streamed radio broadcasts at better quality than portable radio.

Like the JBL the sound quality of the tiny bluetooth speaker is remarkable. The speaker has been sitting in the boat for the past four years with no ill effects, of course a San Francisco winter is not quite as stressful as some.

Christian Williams said:
I put another $100 Best Buy car radio in this boat.
Click to expand...

Seems like the right play. The old stereo put out decent sound, worked great with iPod, picked up local FM stations.... so I ended up buying the newer-version-but-still-around-$100 version of the same thing.

With any luck it'll take the same wire-harness connector, which would reduce the time involved installing.

FWIW, I put a pair of JL Audio "marine" speakers in my cockpit, coming up on 3 years ago. Still look great, sound great, and no sign of moisture issues....

A little bit more than the Fusions, but... so far, a thumbs up from me.

They look like typical 6.5 inch cockpit speakers (hole size about 5") but the quality of the sound is awful. Tinny, cheap, soulless. Sounds like AM radio in a 1975 Toyota shoebox. I have tried all equalizer adjustments, no dice.