For hose leaks I like self fusing silicone tape. I have yet to find an adhesive that really wants to stick on a wet hose.

I also keep chunks of old truck inner tube on board for emergency purposes.
W

The End is Nigh!

Today all the way from London, England arrived a new stuffing box hose and 4 Loydds marine rated hose clamps. I am still waiting on the same stuff from West Marine.....go figure. Of course shipping from the UK was as much as the hose and clamps!

I have an ex-USN aircraft mechanic friend with a nice lathe who has said he will turn a new stuffing box for me. I am going to have him turn one. While I feel the old one is OK to put back in service it does have some abnormal wear and I think next time I haul I will replace it with brand new.

If anyone with an Ericsson with 3/4 inch shaft needs a new stuffing box my friend said he would be happy to help. He often makes parts for old motorcycles and cars.
T

Hey Brett, Late to the party but a few years ago I cut an access panel into the side of the quarter berth behind the engine compartment. it is about 10" by 6" and I made a flat cover out of mat fiberglass that screws down with a rubber seal for noise.

I found that when working on our stuffing box this panel allows me much better access to the side of the box so my left arm goes in that opening and my right though the opening at the rear of the engine box. Trying to adjust the stuffing box from the engine openings which are similar to what "Lotus Flower" showed in his pictures was like playing "Operation" from the 70s without the buzzer.

Just a thought though late!
W

Tom thank you ever so much! If I have trouble the vibrating tool will be employed to cut an access panel!
W

Episode 6 - She May Swim

On first attempt to install the hose the I was unable to shove it all the way onto the stern tube. I had to grind away a bit more of the fiberglass blob under the stern tube.

After grinding the stuffing box hose still did not want to slide onto the stern tube. A little Dawn detergent inside the hose did the trick.

Once the hose was on a few quick twist with a 7.5mm socket fastened down the best hose clamps I have ever used.

My dive knife made fast work of cutting the packing into 4 nice little circles, 3 of which I used. I was able to lay the packing nicely in the little stuffing box and slip it over the tip of the prop shaft.

Getting the shaft all the way through the stuffing box and into the shaft coupling required a bit of work and would have been much easier had I a helper, but I eventually with a bit of twisting, shoving and tapping got the shaft deep into the coupling and tightened down.

I wish I could have gotten the aft most hose clamp further aft, but the fiberglass blob prevented it. The previous clamp had been embed in part of the mess. I felt like grinding blind was playing Russian Roulette with both the hull and the stern tube, so I settled for what is in the photo. I was able to confirm that both aft clamps are on the stern tube

The only thing I have to do now before I splash is reconnect all the hoses and wires. That is Sunday's project.

I have scheduled her to splash on Monday if the weather holds.

Senior Moderator
Blogs Author
As the saying goes, "now that's a bit more like it!"

Thanks Loren. I hope this thread helps someone else out.

Blogs Author
Boat jobs: 3x longer and 3x more $$ than you think it should be! Way to keep after it.
M

Looks good! One final thought-typically on something like that, pros will mount the hose clamps such that the screw housings are 180 degrees
opposed to each other.

Martin King said:
Looks good! One final thought-typically on something like that, pros will mount the hose clamps such that the screw housings are 180 degrees
opposed to each other.
Click to expand...

As always, good advice.
Found this tutorial. I do orient clamps like the 'best practice' pictured here. 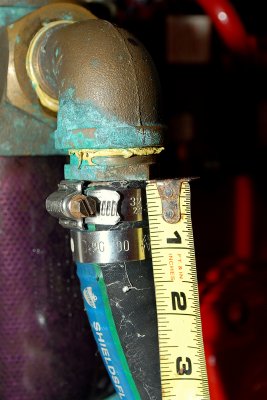 Proper Installation of Double Hose Clamps by Compass Marine How To

Martin and Loren thanks for the input. I had never heard of orienting clamps opposite directions before. Interestingly enough the old clamps were on the same direction, but then again they had also shoved the stuffing box hose onto a mass of wet glass.

I am so happy I have found this site! Such good folks and information.

That looks pretty darn clean. On the hose clamp positioning: this might be a little bit of compromise. Mine are offset about 15°, the max I could do to keep them in sight and accessible.

Well I spent a bunch of time today swapping the hose clamps to be on in opposite directions and somewhat offset. I was also able to get the aft most clamp further aft by a bit.

I did not finish putting the all the stuff I disconnected from the engine back. It takes longer to connect than disconnect, but I am nearly there.

Tenders your humor is grand!
W

This was the temperature 2 minutes after I opened the hatches today. But the good news is the engine is all connected up. Tomorrow I take the yard's cherry picker to the masthead to replace some damaged halyards then she swims!

Moderator
Blogs Author
Yes, but if you take the point of view of the engine, you are actually running dangerously cool.
W

I suppose the Engine and I will have to co-exist in different environments. Better button down the engine cover and let her heat up!

Rigging work done. Set to launch tomorrow morning. I have never been so nervous about a launch in my life.
W

Here is the re-clamp of the stuffing box hose.

I suspect I have to losen the stuffing box a bit. I did a 10 minute run from the yard where I worked on her to the new home port and as far as I could tell not one drip! I am using regular flax packing, so I suspect I have to have some drips happening while turning the screw.