Tricks and Tips for Awkward Spaces

Senior Moderator
Blogs Author
Recently I've been working under the cockpit, with the usual issues. A few approaches and modifications have made things easier, or at least possible.

--Nonskid for slip issues. The footing in my cockpit lazarette hatch is bad. The hull slopes, stand in it and -- oops. After three years I greatly value the two square feet of nonskid paint I applied for better footing. 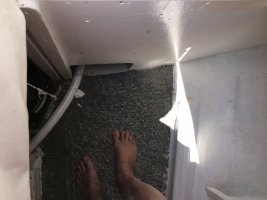 --Ratchet wrench for hose clamps. Two sizes covers all. When a hose clamp faces the wrong way, a screwdriver in confined spaces is awkward.

--Remove stuff for access. It took me a stubborn while to realize that, for any work in the bowels of the boat, it makes things much easier to clear the way first. On my model, the waterlift muffler and hose to the exhaust elbow come out pretty easily, which really clears the way to the stuffing box or engine. So does one end of a cockpit drain hose, if the hose is in the way. So does first removing all the gear down there (although I don't have any gear down there). The time spent is worth it, and once done a few times becomes routine. 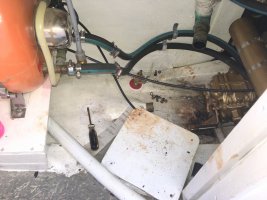 --Tie-Away. The maze of components-- hoses and wires--can often be lassoed and dragged aside for better access.

--Access ports. When a recurring job is easier from behind a bulkhead, an access port can be installed. Every subsequent owner will thank us.

On the universal diesel engines, un-clamp the heat exchanger to move it up slightly (use Christian's tie away technique, perhaps) for access to the transmission dipstick & fill hole.

By the way, be gentle with the tie-away technique on the old wires because some are brittle or have poor or marginal connections after all these years and my be easily disconnected.

Reading glasses- ever tried to focus on something when you can't move your head more than a few inches away from it?

Something to put in the lazarette lid latch clasp to prevent it from latching should the lid accidentally close on you!

A small piece of dense foam flooring or similar for padding the unavoidable hard spots one finds when contorting around corners, on top of thru hulls, etc.

A small bucket to hold all the tools and supplies you might need, to prevent multiple trips/struggles in and out of the lazarette.

An old towel to spread out underneath your work area to catch the fasteners etc. that you will inevitably drop so they won't migrate to inaccessible bilge areas.
N

- take a video with your phone, instead of a still photo, of some back-there inaccessible point of interest - at least part of the video will show what you're trying to see when you can't get a single pic to do it
- little mirror on a telescoping handle: either get one with a directional LED light built into the mirror's frame, or shine a flashlight on the mirror to illuminate what you're trying to see.
G

A nut driver for hose clamps is better than a screwdriver and may feel better than a ratchet and socket for applying torque. I can't believe it took me over 30 years of working on cars and boats to make that realization. Good grief.

Blogs Author
Two pieces of blue painter's tape. One to tape your glasses to your forehead while you're hanging upside down. One labeled "remove tape from forehead" located where you're sure to see it when you emerge from the depths.

G Kiba said:
A nut driver for hose clamps is better than a screwdriver and may feel better than a ratchet and socket for applying torque. I can't believe it took me over 30 years of working on cars and boats to make that realization. Good grief.
Click to expand...

Agree about the nut driver. Also a 5/16" deep socket, on a quarter inch drive ratchet with a short drive handle. Keep a 1/4" socket handy, too.

An iPhone set to selfie makes a great mirror, and can video it. Obvious? Yes, to the 12-year-old girl who showed me.
N

An iPhone set to selfie makes a great mirror, and can video it. Obvious? Yes, to the 12-year-old girl who showed me.
Click to expand...

This lighted mirror works well to see a work area you can't illuminate/see with your phone in selfie mode, and to guide placement of a tool when you can't see it directly/easily. I used it this last weekend to position a drill under a galley cabinet that I couldn't get my head and arms into or see directly:

Senior Moderator
Blogs Author
Hmmm. OK, I just bought one of those. $15.

Christian Williams said:
--Access ports. When a recurring job is easier from behind a bulkhead, an access port can be installed. Every subsequent owner will thank us.
Click to expand...

Rudder post packing gland accessed from the comfort of the rear berth.

Senior Moderator
Blogs Author
RE Post #10, good little telescoping mirror. Useful for up-close view of hidden stuff, where the lights work. Utility of a dental mirror. Not good for view of objects far away. 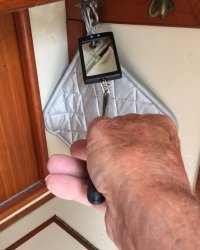 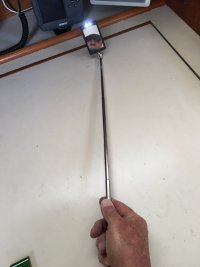 A bit larger than a “small space idea” but a hidden treasure of storage space on at least the E32-2’s!!

Starboard side settee has a nice upper shelf in back of it - BUT - underneath, in back of the seat back, is a huge area just waiting/begging for your usage if you just remove that seat back panel! 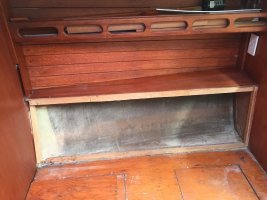 We finished it off cosmetically first with the idea it’s GREAT hidden storage for valuables or even a long gun should one want or feel necessary. 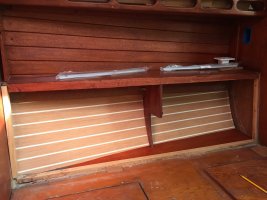 Our choice was for electronics for LED floor lighting, a coated solid steel lockbox and a shelf for whatever we want hidden. 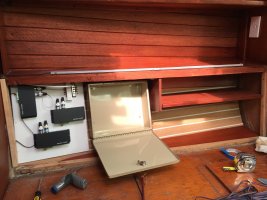 With the seatback back in place, it’s not an area for most boat invaders to suspect exists or take the time to look for!! 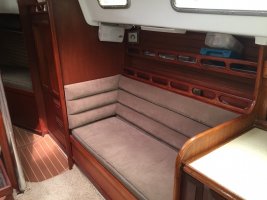 Christian Williams said:
RE Post #10, good little telescoping mirror. Useful for up-close view of hidden stuff, where the lights work. Utility of a dental mirror. Not good for view of objects far away.