What good is a boom vang?

The 1971 Ericson 29 has a gooseneck that is mounted to a slide track on the mast. The Garhaurer Ridged Boom van not only give shape to the main, but it can also at like a Cunningham. It was one the best up grades on the boat. It is a go fast tool.

Blogs Author
I appreciate all of the feedback on this thread. I went sailing today with these comments in mind.

My problem really related to my incorrect use of the topping lift. I figured if I could keep the boom an inch or two over my head and the sail still had 'good shape' then all the safer and better for me.

Today instead, I lowered my rope boom topping lift after I had raised the main and headed out in high-teens wind. I indeed could make a difference in the trim and sail shape by tensioning my vang. Here's a wide angle shot with the vang hauled in. The reefing lines look taut but they were not holding any weight. 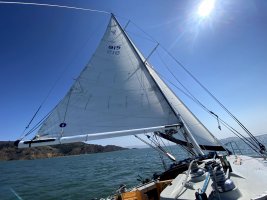 To compare, I released the vang and sure enough the boom floated up about 10-12". More twist in the main. 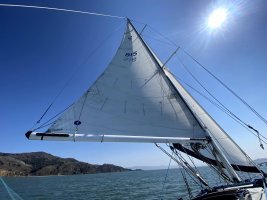 With the vang released the entire boat unsettled. More flopping around, more variations in heel, and a lack of control.
With the vang tensioned, the rig and the boat were much more calm and steady.

I think I will be able to defer reefing to higher wind levels by using the topping lift and vang as intended instead of what I was doing incorrectly.

Also, I am upgrading my running rigging and gear. This vang practice process has helped me decide to go ahead and buy new blocks and line for the existing vang as a starting point. I can move to a rigid vang later if need be.

On an entirely separate note:
As I was making my way out of my local marina neighborhood, I saw a corpulent motor yacht that was reminiscent Rodney Dangerfield's boat in Caddyshack. As it passed, I noted with some pleasure that the boat in question was named Bushwood, which is also the name of the fictional country club in said film. I hope they get the joke. 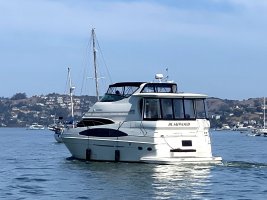 Senior Moderator
Blogs Author
Yes, the topping lift should be floppy while sailing. Its only role is to hold the boom up during the act of reefing.

The vang can certainly be played to dump wind, and to increase the twist at the upper leach. Racing crews do it to deal with gusts and excessive heel. But playing the vang is a lot of work for casual sailing, and the vang needs to be led back to a winch.

An easier way to deal with gusts when the mainsail is overpowered is the traveler. It's right there handy, and can be dropped and hauled back up., It doesn't change the twist. Twist is controlled by the mainsheet.

All of which to simply say that I go to the traveler before the vang.
G

"Hey! You scratched my anchor."
Tom, that is so funny. Sometimes people are surprisingly funny. I remember when my kids were in Middle School. They came home one day to tell me that the school play was Monty Python's Holly Grail.
On the other topic... On my old Ericson, The topping lift is used to hold the boom up when the main was down. When the main was up, the topping lift is eased so it would no affect the sail trim. On the new boat. No topping lift. However, I always ease off the vang completly when raising the main and when putting a reef in. Makes a huge difference in the way the boat sails and in the shape of the sail when reefed. BTW, you could have asked Dolores. She's great with sail trim but sometimes will not volunteer info unless asked as to not sound like a Know-it-all.

Gambling is illegal at Bushwood, AND I NEVER SLICE!!!!!

Blogs Author
I think of my vang as setting the maximum amount of twist I am willing to accept (more vang tension for less twist, less vang tension for more twist), and then my actual active trim is done with sheet and traveler, as has been previously mentioned. I usually leave mine alone, for the most part... though I know "vang sheeting" upwind in heavier conditions can be very useful, especially with the relatively short cabintop traveler on the 32-3. It's something I need to play with more.

The only time I use my boom lift WHILE sailing is when it's drifter conditions... 0-3 knots and the boat is moving primarily via prayer power. I find that its usefulness in holding up a sail shape in light wind is very, very quickly made obsolete when you have even 4-5 steady knots to get moving with. But then it dies back down to 0-2......

I'd love a rigid vang for these conditions... going forward on the boom is very annoying in already annoyingly light conditions

Blogs Author
I've seen a large variety in (cabin-top) traveler lengths on these Ericsons. Some are only as wide as the companionway "doghouse" while others extend out as far as the grab-rails. For upwind sailing, it seems like a lot of the vang-work could be accomplished with a lengthy (wide) traveler.

However, if you have a narrow traveler, it's likely a much simpler and easier upgrade to improve the vang rather than to replace the whole traveller setup.
F

When I put the ridged boom vang on the e 29. I removed the toping lift as it was un necessary. Beside I have a pig tail off the back stay when I want to store the end of the boom.

1. For your Spectra topping lift, I presume the lifting end is bare spectra eye-spliced with a thimble, and the working end has some sort of a cover to make it easier on the hands? Any pictures would be interesting if available.

2. You run your reefing tacks into downhauls that can be operated from the cockpit, affording a good margin of safety in the reefing process (rather than working on the cabin top hooking up dog-bones). Is your topping lift also led to the cockpit in some manner, or do you skip the topping lift when reefing in engaging sea conditions?

I think the Garhauer rigid vane is good quality.

Yes, the working end of the topping lift is standard double braid--that is, where it exits the boom to be cleated. The 40' TL itself is 1/4" Spectra, and the internal portion (replacing the wire leader) is 3/16th Spectra. Blog entry.

The topping lift cleats on the boom, I rarely have to adjust it.

Yes, the working end of the topping lift is standard double braid--that is, where it exits the boom to be cleated. The 40' TL itself is 1/4" Spectra, and the internal portion (replacing the wire leader) is 3/16th Spectra. Blog entry.

The topping lift cleats on the boom, I rarely have to adjust it.
Click to expand...

Thank you - blog entry is very helpful on the construction.

As to the use, I think you mean you slacken the lift once underway and don’t use the boom lift to facilitate your reefing process.
B

I bought a Vang Master boom Vang for my E26-2 , they were great to work with and the Vang is a piece of jewelry, could not be happier with that upgrade

Senior Moderator
Blogs Author
RE TL adjustment: On my boat, the cockpit boom height with mainsail furled (controlled by the topping lift setting) is such that no changes in TL length are necessary when the mainsail is raised to sail. If I reef, the TL goes slack some and can be reset, although I often don't bother. This convenience probably varies from boat model to model.
You must log in or register to reply here.
Share:
Facebook Twitter Reddit Pinterest Tumblr WhatsApp Email Share Link
Top