Last winter and spring, I committed a few more projects / abominations on my boat. These next few posts confess to some interior modifications that I have been thinking about for a few years and finally executed while the boat was hauled-out and sitting next to the workshop for nine months. The overall goal of these was to explore how the E29 might be converted to more of a cruising boat, and increase "livaboardability."

One thing that I always run into (and mercifully forget) is that nothing on the boat is straight or square, even if it might appear to be so, at first glance. So everything takes longer and is more of a learning experience than per initial expectations.

The first problem was the miniscule galley space. PO's exacerbated this by hacking out a big chunk of galley cabinet to (poorly) install a gimbaled range. The remaining galley was in pretty poor shape as well, with missing trim, wobbly bulkhead, and a warped shelf. Although now I realize that this latter bit was due to the original installers bending it to "make" it fit under the "duct" at the hull-deck joint. In the end, it might have been better to discard everything and start over, but I took the approach of tidying up and extending what was there. 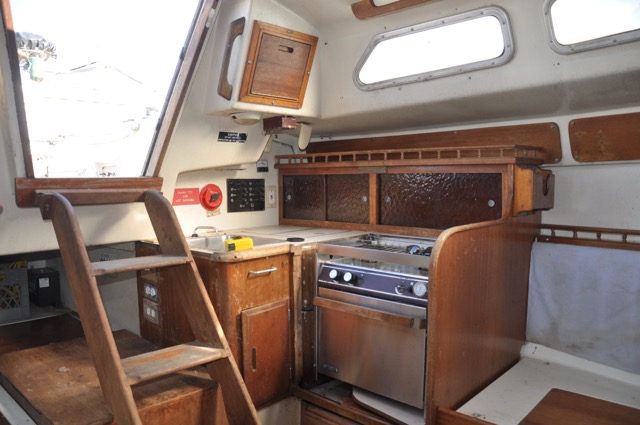 One option was to extend the galley counter across the companionway, at the cost of degrading engine access, companionway access, and the expansive double-quarterberth. Although this would have the advantage of keeping the additional weight centered, and wouldn't consume any "floor space."

In the end, I opted to carve off a bit of the port settee (the boat has more than enough bunks for the current crew) and create a small "U-shaped" galley. I came up with this on my own, but then found photos of the E31, that suggest that Mr. King did pretty much the same thing on those very similar boats.

The extension has three drawers, a pot-locker, two "spice racks," a large side-locker for bulky items, and a trash bin with chute. And it more than triples the usable counterspace. There is a lot of detail work in this thing - crude as it is - I spent a lot of evenings out in the shop, tinkering around with it for an hour or two at a time. (For example, the drawers aren't the most space-saving design, but I needed cross-rails to make the latches work. And I had to discover ways to make radiused outside corners and fiddles, using the tools and materials on-hand.) 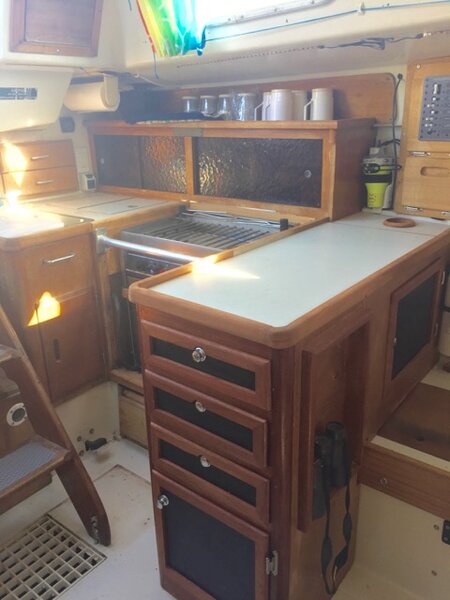 Guess I need a better picture when the sun is at a more agreeable angle. There are a few details still to fiddle with, so to speak, but I've saved those for next winter. I reconciled the missing bits of trim and fiddle, although I ran out of the material I was using and can't get any more (pieces of an old table). Got rid of the wobbly pin rail over the galley and will make some sort of bins up there, the design of which are not yet clear. In previous actions, I added an aluminum grab bar across the front of the range, which also stabilized the bulkhead that was made wobbly by the PO's butchery. Since the DC circuits were, years ago, relocated to a new control panel, I made a drawer unit to fit in their previous location. (I do have a small microwave on the shelf, that could slip into that space. Still debating.) My door and drawer-face design has gradually evolved into a lighter and hopefully more attractive style, so now I need to take my earliest efforts home and rework them into the new style. And I need to do something with that odd little notch between the galley and the control panel, where the EPIRB is temporarily sitting.

I'm fairly happy with how my radiused corners came out, (from more pieces of the old table) and the fiddle around the trash chute. Not so much with the radiused fiddle corners, (but not annoyed enough to start over at this point!) 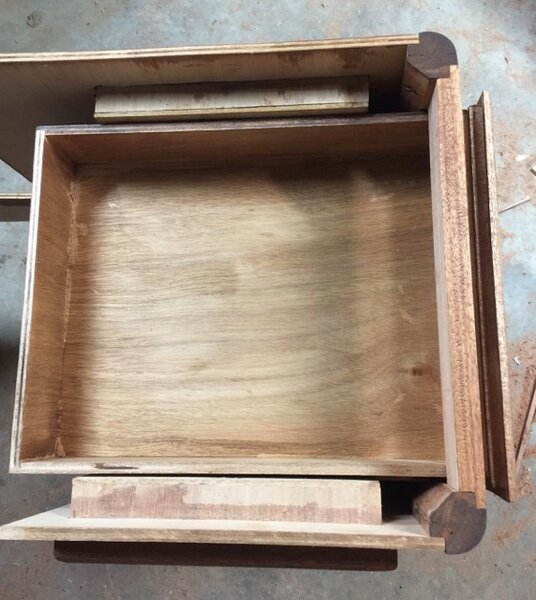 A few years ago, I dropped the range an inch and made a "cover" for it to get more counter space. But that was not compatible with the pot clamps and prevented the range from gimballing freely during times when we were "rail down" on starboard tack. So I discarded the cover and raised the range back up. Or I will...

A sharp eye might pick out the thermostat on the aft bulkhead - I finally got around to finishing the ice-box conversion to 12V refrigeration. Yep, cold drinks on board this summer! A bit of probing revealed that there is at least 2-3 inches of insulation all around the original ice box (albeit low-density foam) but there was none at all on top. I glued on an inch of high-density foam under the counter and the lid. I am pretty pleased with it as-is. During the very hot weather (ca. 100F) it runs for approximately five minutes and rests for 15 minutes - less during cooler weather. Current draw averages 2.6 amps. The batteries can handle that for days on end without recharging.
About author

toddster
Currently have a E29 on the lower Columbia and a Hobie 16 in The Gorge.

Really Nice Work!
Those rounded corners will be appreciated when you are pin-balling around the cabin (unintentionally) in a seaway, too.
Your galley storage and counter has now leap frogged past our Olson...
Speaking of fridge temps, we also have a little remote (RF) read out for the sender inside our fridge. $12. approx, on sale, from Camping World.
that is absolutely awesome!

I should add, please post more pictures of the construction details. Those of us like with storage challenged boats would love to see more.
This is really great. Nice work.
Thanks for the kind comments. There are some more construction details - perhaps too many - in a follow-up post that has not been "approved" for viewing.
Looks really nice!
Know this is coming late - but nice work - well done.

//sse
You must log in or register to reply here.