Can't seem to add photos to the "comments" section, so I'll tack on an extra post.

Thanks all, for the kind words. Soft focus is a friend to some of the details...

I should add that this, like most of my "additions" was made so that it can be easily removed, if putative future owners don't appreciate it, or the port settee somehow becomes vital to reclaim.

Here come more details than most would want to know:

I did purchase a 12V temperature readout for the icebox. I think it cost $7 or so. But it took six weeks to ship from China, so it wasn't here during the install. Still sitting in the "winter projects" bin. Impossible to see in the photo, but I did add a red LED to the thermostat housing, wired up to the "diagnostics" terminals of the Danfoss compressor. So in case of a fault, the status (count the number of blinks) can be read without climbing into the sail locker. BTW: The compressor is completely inaudible, from inside the cabin. The only sound from the fridge is a small "click" from the thermostat going on and off. If the "click" gets too annoying, I suspect that the white box could be replaced by any inexpensive digital thermostat. But you know, first there are those peas under the mattress to take care of...

There don't seem to be a lot of construction photos on file - I thought I took more...? Basically it's a bunch of plywood (8mm okoume marine grade) boxes. Dadoes, glue, and lots of clamps. (Where pieces were hard to clamp, I cheated with some pneumatic staples.) Except the front is a hardwood frame ("Mahogany" from various sources.) Plus some picture-frame style doors, inset with 1/8" ABS sheeting. As an alternative, door skins are light, inexpensive, have mahogany veneer, and would also work as the panel. Some question about whether doorskin is suitable for damp locations, but the door on the chart table was made that way, and hasn't deteriorated in six or seven years. So why choose ABS? It's already in a lot of other places on the boat, starting with the control panels, but also bypass doors & etc. As may be seen in future posts, perhaps, but more on that later. Since I was making a lot of doors & drawers (future posts...) I found it convenient to spend a day just making door rail stock in bulk. Saved a lot of tool set-up time. I.e. rip twenty or more feet of rail blanks, then cut all the dadoes at once, then all the panel slots. Then that stock can be quickly cut on the miter saw to make door frames as needed. One could also do all the round-overs in bulk, but I find these easier to clamp-up while they're still square, then run the finished piece over the router to round-off the edges.

I think it's obvious that radiused corners create a lot of dead space on either side of drawers, as shown in the previous post. (No problem for a "locker.") Hence, the "spice racks" are inset to occupy that space and provide support for the drawer runners. They're just framed boxes glued and screwed into holes cut in the carcass. The drawer runners are just pieces of the hardwood waste from the bulk dado-making, screwed to the back of the spice racks. Still need to make shelves and retainers for the racks - toying with heat-forming ABS. I'd like them to be adjustable.

This may show construction of the corners a little better: Glue-laminated two strips of wood from an old ruined tabletop (might be teak?). Sent away for the biggest roundover-bit that would fit (1" radius) on my router table. (Didn't quite fit - had to build a little jig.) And the rest is just table-saw cuts. 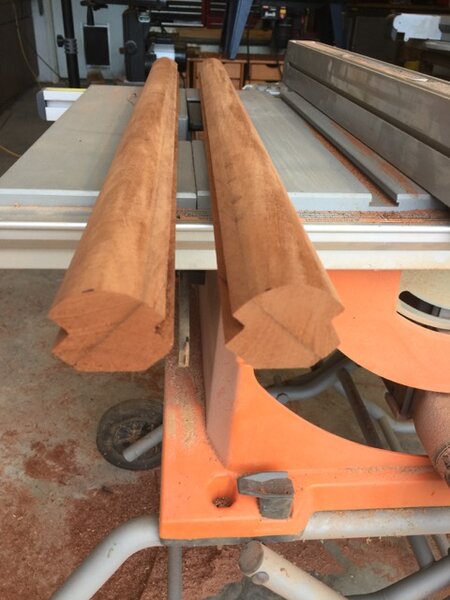 The rounded fiddles were cut from squares of the same wood, laminated to double-thickness, using three concentric cuts with different-sized hole saws chucked into a drill press. Then rounded-over on the router. A whole one (with an outside dado) was used on the trash chute, the other (inside dado) was cut into quarters with the band saw. Jeez, every time I leave the roll-up door open, I end up with unwanted supervision. This guy loves to eat mahogany sawdust for some reason. 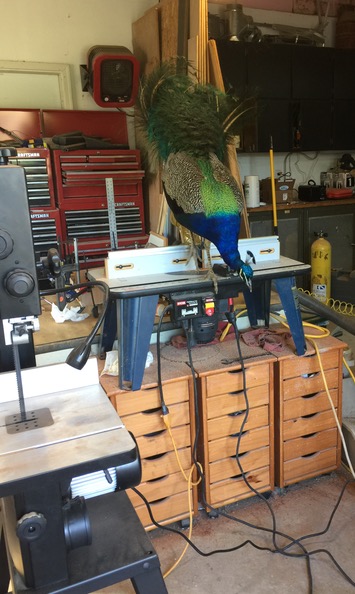 The countertop laminate is Wilsonart 4942-38 "crisp linen" which is the best match I could find for the original, though the original is a bit more glossy. It weathers to a pretty good match. The latches are SeaDog 224300. Surprise! If you buy them in the bulk pack, they don't come with the strike-plate... The stain is Minwax 210B "Golden Oak," (225 "Red Mahogany" came out much too dark. "Honey Oak" was a little too light. Not much else in that range at the local BFE Home Depot.) But some of the wood stains a lot darker than other pieces, and there are a lot of mismatches on board. The main problem with the fiddles is that most of them are made from stuff that will stain very dark, but all I have to finish up with is light-staining wood. Could try staining those bits separately with the "Red Mahogany" or just not stress about it. Probably depends on whether I'm procrastinating unpleasant office tasks that day. Then everything was roughly finished with a couple of coats of "Spar Coat" polyurethane. 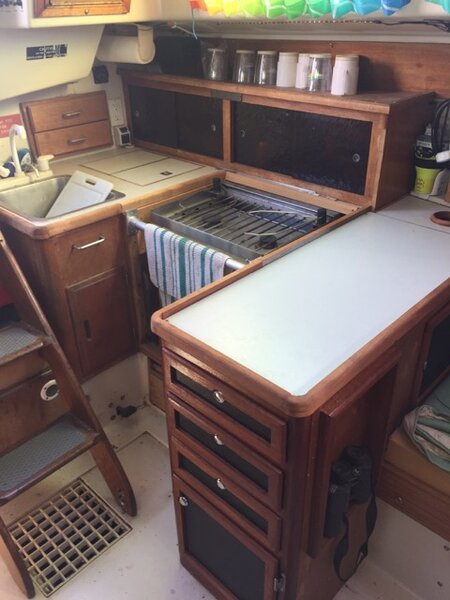 Whew! That's all I can think of at the moment!

Cut a wood block to the desired shape, less 1/4". With a heat-gun and hand pressure, form strips of ABS around the block to make "rails." Trace around block on ABS sheet and cut out "shelf bottoms". Glue and clamp "rail" to "shelf bottom" with ABS cement or use Harbor Freight plastic welding kit. Thinner "upper rails" can flip up out of the way or flip down to retain items while under way. Not sure if this will actually work for small items like spice bottles, unless they are really jammed together to prevent them from sliding around much. Oops. Photo limit reached. Hmm... but this gives me an idea for "book shelf retainer concept 3." 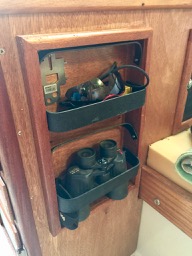 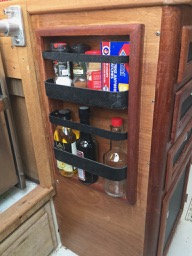 You can modify your original blog posting to add photos, but the 'comments' section does not accept them.
Thanks for the additional details, but I have to ask. Why do you have a peacock?

Slick470;bt2010 said:
Thanks for the additional details, but I have to ask. Why do you have a peacock?
Click to expand...

Ah, they're just another unwanted "inheritance." For some reason, my parents got a pair of them almost fifty years ago. I would have thought they'd die out from inbreeding by now, but they seem to stay in population equilibrium with the coyotes and the hawks and the poachers. When my dogs were young and vigorous, their number-one job was to keep the peacocks on the other side of the county road, away from my house. But now the dogs have gotten old and died and the darned birds are still here.

toddster;bt2011 said:
Ah, they're just another unwanted "inheritance." For some reason, my parents got a pair of them almost fifty years ago. I would have thought they'd die out from inbreeding by now, but they seem to stay in population equilibrium with the coyotes and the hawks and the poachers. When my dogs were young and vigorous, their number-one job was to keep the peacocks on the other side of the county road, away from my house. But now the dogs have gotten old and died and the darned birds are still here.
Click to expand...

Huh, would have never guessed anyone would have them as pets. Thanks for the explanation.
Nice job! That is a well thought out addition.

Loren Beach said:
You can modify your original blog posting to add photos, but the 'comments' section does not accept them.
Click to expand...

You must log in or register to reply here.