I guess it's time to introduce "No Problem," the ~1971 Ericson 29 Tall (double spreader model with inboard lowers) hull #8 I picked up two years ago and began to re(build)fit. There will be quite a few chapters in this blog due to the sheer volume of work going into her.

I want to preface this with the assertion that one should never rebuild an old boat if one wants to sail. I have the distinction of having a '91 Macgregor 26s in a slip at the local lake, so I can still get out on the water. I wanted to upgrade to something with standing headroom, though, and, as I have future cruising aspirations, I wanted to get a working knowledge of all aspects of boat repair.

Well I am certainly getting that.

20 some years ago she was on the hard in Mexico during a tropical storm. Debris clogged the single cockpit scupper and the interior was flooded with fresh water for some time. Of course, oil from the engine mixed with the water and pretty much destroyed the interior. The PO brought it up to his house here in Phoenix, and where it more or less sat for 20 years with the intention of getting around to fixing it, but really just letting the occasional storm fill it back up with water. He moved on, and I have uh, "No Problem."

Definitely going to have to rename her. 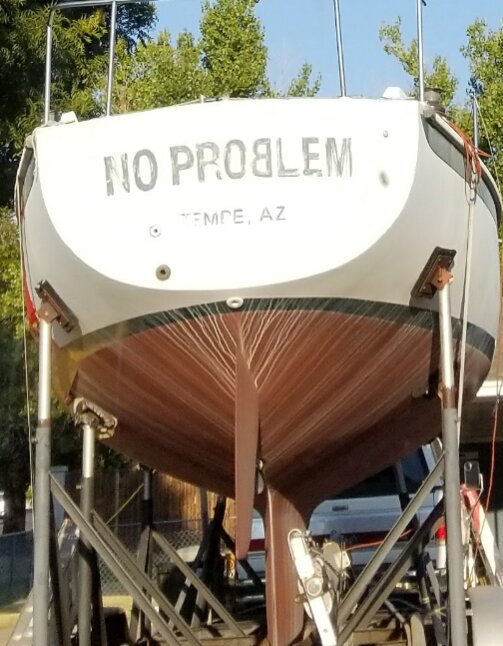 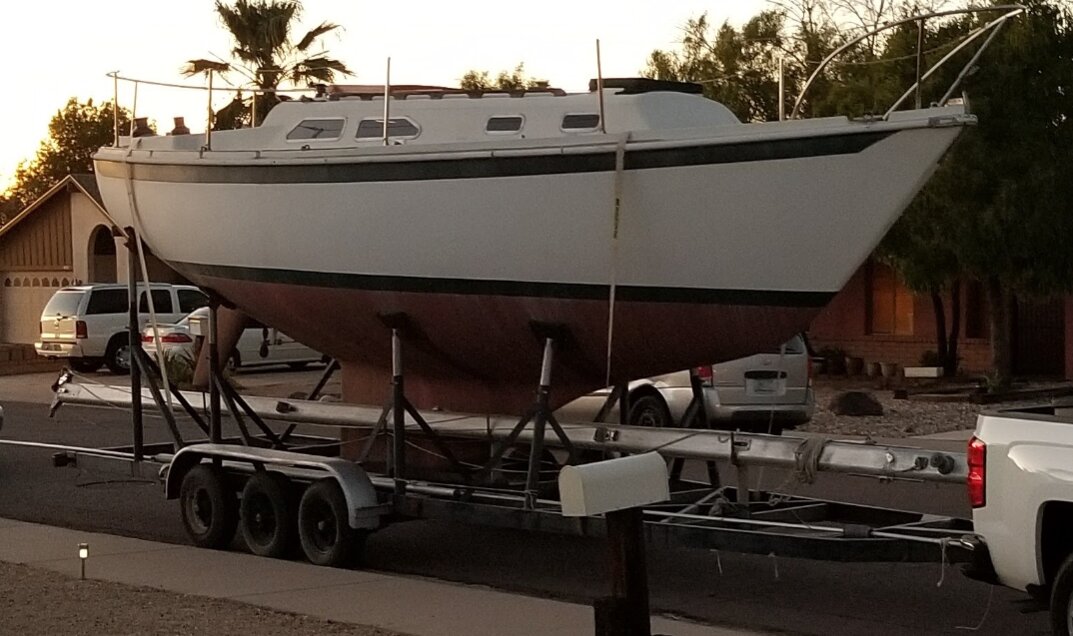 "No problem", as you can imagine, has lots of problems. The first order of business when I got it home was to strip all the hardware, stanchions, etc off of the deck, remove some core from the holes, and fill with thickened epoxy. In a couple of days I'd rendered her more or less water tight, though the hardware was not very salvagable (to include the winches, with broken bases and stripped almost everything.) The genoa track around the toe rail was kind of difficult in this regard, as tabbing blocked access to the nuts. This arrangement of course kept the bolts continuously suspended in non oxygenated water, which of course causes stainless to corrode. A torque driver on the flat head screws snappend the bolts right off, mostly about 1-1.5" down, but some unfortunately toward the surface. The remaining holes were allowed to air out for a few days and then were epoxied shut. I'll eventually fair the ridge down and replace with aluminum t-track.

Most of the core appears sound -- one of the benefits of being in phoenix for much of its life, I think. Won't really know until the structure is stressed if it delaminates, though. The gelcoat all over the deck is crazed pretty bady, it's going to need paint.

The next step was to start down below and assess the trauma. The bulkheads all had rot on them, and the lower quarter-to-third or so had all spent considerable time submerged. The cushions were all black mold sponges. The galley furniture was rotted. There was oil everywhere. One of the lugs holding the engine mounts in place actually pierced the hull and the wooden engine stringers encapsulated in the engine bay liner were wet and rotted. All of the thru hulls had gate valves that were corroded and wouldn't move. The plywood backing plates were all rotted and no thruhull was actually solidly mounted -- they all had play. The liner cabin sole was balsa cored, and had lots of little screw holes in the top for the former teak and holly veneered sole on top of it. That had been stripped out, but luckily the holes were still there to make sure the core completely rotted. The windows had been poorly rebedded at some point with gobs of white silicone caulk, and of course were leaking (and now impossible to remove without destroying them). GAH!@$@$!@$ The boat was a wreck. I quickly realized that I really, really needed to change the name.

But I'd get my wish to do boat repair work! And you'll get a chance to see the E29's darkest secrets...

texlan
I enjoy sailing and tinkering...own a Mac 26 classic in a slip at the lake and am in the process of restoring an Ericson 29, hull #8.

Some projects we'd never start if we knew what was coming. But they bring great satisfaction when finally done!
You must log in or register to reply here.