I watched some videos of the double damned race up the Colombia in Express 27’s, they don’t seem to care at all about the loads. They just throw the sheet from one side to the other. (Often in that race spreaders get a saltwater bath)

I like Christian’s technique. I can’t wait to get Cinderella back out there.

Moderator
Blogs Author
For the record, here is a video of the "singlehander's jibe" offshore in 20+ knots. The clip starts at 03:10

Thanks for posting Christian. From my reply earlier, one difference I see is how much deeper you were and your mainsheet was a bit longer which prevented it from pulling up short.
I'm trying to figure out if there are any advantages to gybing the headsail first? For no reason I can think of, it seems like we always gybe our main first.
Chris

Seems like there are as many different variants to jibing as there are sailors. I use a combination of techniques depending on the situation and wind speeds. I like Christian's saying, "Anything that feels right works." But that said I don't use Christian's method. I've watched his very instructive video many times, tying it out on the water but I still feel that the boom just moves a bit too fast for my comfort level. Add to that one time I damage the traveler during a particular windy day and another my wife almost lost her head during an accidental jibe. I prefer a more controlled jibe so I use a boom brake. 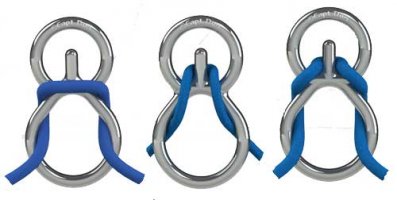 A Captain Don boom brake. Awful name, from a marketing point of view, but it works. I run a line to the port side mid-cleat, through the boom brake (usually using the center configuration above) and then to a snatch block mid way on the starboard side, then the bitter end goes back to the cockpit and wraps around the cleat next to the starboard winch within easy reach from the helm. Resistance (braking strength) is controlled by how tight the line is tied off to the cleat. When the winds are high I loose up the brake line, which was tight to prevent an accidental jibe, center the traveler and pull the boom as close to center as possible in high winds which can be a challenge sometimes. Then tighten up the brake line again and jibe. Boom will cross the center line of the boat but much more slowly and stop on the opposite side. Then I loosen up on the brake line, allowing it to move out a little more and then adjust the main sheet to where I want to boom to finally end up. All this time the Genoa has been backfilled (if I'm solo sailing) so I let loose on the windward jib sheet and pull in the leeward side. Sometimes, when the wind is light (less then 8 knots or so) I won't center the boom with the main sheet but just jibe. Most times the main will swing over and sometimes it won't move at all depending on how tight the brake line is made at the cleat. I then just loosen that line up a bit to allow the boom to slowly swing over in a controlled fashion. If I get the tension on the brake line just right then while jibing down a course requires no additional line tension adjustment at all. Again, as Christian says, anything that feels right works, this works for me and adds a bit of safety. Now this is for cruising and not for racing which would require a quicker jibe but when single handling it works especially well.

I attached the boom brake by rigging a ring with a length of line to the back of the boom, wrapping it around the boom twice, through the ring, and then attaching the other end to the point where one of the main sheet blocks are attached. To the ring I attach a twisted D shackle so that when I attach the boom brake it is aligned properly. Here is an enlargement from a photos of that area.

The red arrow points to the boom brake. Boom brake control lines where not being used at the time the image was taken but can be attached rather quickly. The line fore and aft of the shackle keep the brake in position on the boom with the three connection points sharing the load. I could have installed a "U" fitting where the boom brake is but I felt that wrapping the line twice around the boom lessens the load at that point. Been using it for years and it works.
N

I'm very glad to hear your positive review of that boom brake. I bought one about a year ago, thinking it looked like a useful piece of kit for short-handed cruising. But, I still haven't actually tried it.
I'm guessing that the three options you showed for how the line loop feeds in/through the brake provide different amounts of friction when the boom gybes (increasing from left to right in those three diagrams?)

nquigley said:
I'm very glad to hear your positive review of that boom brake. I bought one about a year ago, thinking it looked like a useful piece of kit for short-handed cruising. But, I still haven't actually tried it.
I'm guessing that the three options you showed for how the line loop feeds in/through the brake provide different amounts of friction when the boom gybes (increasing from left to right in those three diagrams?)
Click to expand...

Yes, that's correct but I've only used the middle one mostly because it's very easy to slip on and off but it never has slipped off by itself. The only thing I recommend is to "wire up" (seizing wire) the twisted D shackle. I had it comes loose last year with the pin ending up someplace in the Chesapeake Bay but luckily the brake ended up on top of my dodger. Fortunately it wasn't in use at the time.
F

to prevent and accidental gybe. Put on a Preventer...
For a controlled gype.. haul in your main sheet gype and then let it back out. this will avoid the crash

Bolo said:
. The only thing I recommend is to "wire up" (seizing wire) the twisted D shackle. I had it comes loose last year with the pin ending up someplace in the Chesapeake Bay but luckily the brake ended up on top of my dodger.
Click to expand...

I use a similar setup, but using a locking screw type carabiner to attach it to the boom lashing, instead of d shackle. Less than $10 from a climbing source. Climbing industry seems to be better at standards than marin$ industry. Good to buy "climbing" equipment for jack lines/ascenders, etc.