The Ericson Independence 31 we are buying was surveyed today. As we were poking around, in lockers, drawers, etc. we ran across two things that we were just fascinated by:
One was a set of what appear to be factory line drawings of the Independence 31. There were on huge pieces of paper - somewhere between 2' and 3' square. I didn't make photos as we were about to depart for the haul out, and we forgot by the time we got back. We'll make photos next week when we go back to sign papers.
Would anything like this been available to an owner while Ericson was still operating? 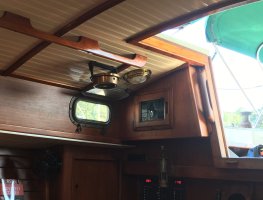 I believe it is called a tell tale compass. The card is read from the bottom, so the captain could be aware of any course changes while in his bunk. It's right over the starboard berth / nav station. Was this a common accessory on Ericson? Never seen one before, but now I have one!
Last edited: Saturday at 4:21 AM
You must log in or register to reply here.
Share:
Facebook Twitter Reddit Pinterest Tumblr WhatsApp Email Share Link
Top