Pimpin Out The Slip

Blogs Author
Besides lavishing time and wealth on our boats, some of us drop some coin on our boats accommodation. Might be a good topic for a thread?
My previous marina didn't allow much in the way of slip modification, but at the current one, for better or worse, anything goes. Well, almost. They did crack down on over-sized dock boxes this year.

The thought came to me when reading through the "single handing" thread discussion of docking, the last few days.

The end result here might not be something you'd even notice, at a casual glance, but it was a weekend project for me.

As it came to me, my slip was lined with some nasty old carpeting. It was probably a cheap and effective solution for the previous owners - for about a month. By the time that I moved in, it was ragged, dingy, gray (or worse) and the tacks were starting to show through. So this summer, while my boat was languishing in the barnyard, I stripped all that stuff off and made some improvements. Hmm. It didn't occur to me to explicitly photograph the "before" state. It turned out that there were actually two more layers of less-weathered carpet under there, so I suppose there was more padding than I thought. The SUP made a good work platform, for getting at the underside of the dock. And I managed to get through the whole job without dropping any tools, and only a couple of nails, in the water.

The centerpiece of my slip upgrade was a large dock wheel that I scored from Craigslist. Then I lined the rest of the slip with P-profile dock edging from Ebay. This stuff comes in 24-foot sections, but the Ebay seller shipped them as three 8-foot lengths, for UPS convenience. Seems to be the same as the stuff found at the usual places, but less expensive. I think it came out pretty well. The only thing I'd do differently is that I followed the installation instructions and used miter-box cuts on the corners. But whoever built the dock was pretty "casual" about the carpentry, and there end up being gaps. So just bending the piece around the 45° angles would probably look better and smooth out the underlying imperfections. 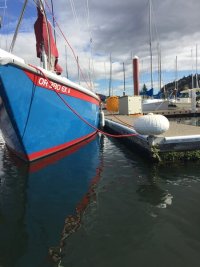 (Kayak-level view). I didn't realize until today that that artsy "green wall" of lush aquatic growth at the end of the slip is actually covering a piece of the old carpeting. The top edge must have come loose years ago, and it dropped into the water. Looks like a little cottonwood tree is trying to grow now at the corner. Maybe I'll have a little shrubbery next spring? I suppose I should bring the cats-paw and hammer and yank that out. But it does look pretty trendy. All environmental and stuff.

Anyway, about single-hand docking and the dock wheel. This is actually a pretty small slip, relative to the size of the boat. I am often backing in with an annoying cross-wind trying to blow me off the dock and into the neighboring boat. My usual method is the old pivot-the-boat-with-the-throttle maneuver, using short bursts of forward and reverse. The prop wash sucks the stern into the dock and the rudder (during forward bursts) pushes the bow over. Except the wind tries to push the bow too far, requiring the occasional forward thrust with the rudder hard over the other way, to recover. I'm not sure if the boat is actually riding on the wheel very much during these pivots, (can't actually see it from the helm) but at least it gives me the confidence to maneuver aggressively close to that corner when I need to.

I had a smaller wheel, even bought a cover for it to stop marking up the boat.

If fell off the dock. Hmmmm. Should've tightened the screws. Diver couldn't find it--12' feet straight down.

Turns out this pad works very well. It's made from an old fender cover, that synthetic thick velour stuff. Slippery, doesn't leave marks.

Beneath it is one of those vinyl "dock corner guards."

That didn't work at all, because the boat wouldn't slide -- just stuck to it like glue.

Yep. According to the Taylor Made site, the large size is supposed to be for 30-40 foot boats. I should more properly have a "medium," but Craigslist doesn't always provide per spec. The neighbor has a "small" wheel on the other side so I'm clearly ahead in the "keeping up with the Joneses" race. I think that the hardware may be just the same (?) only the size of the "balloon" seems different. But I haven't measured.

Very nice and thanks for sharing.

I am Mr. Cheap and Utilitarian. For your viewing pleasure:

1. my steps and hand post for the not so nimble to climb aboard.

2. V shaped lines to guide the boat in- make me look like I know what I am doing pulling in.