Blogs Author
I have holes in the cover into which my companionway hatch slides.

I think they are weep holes to permit air flow/water escape, and I should not fill them with sealant etc.

Even though they are holes.
In my boat.
Allowing water in. 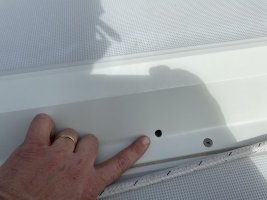 Blogs Author
They are weep holes. Keep them open because they allow additional air exchange under there where your sliding hatch hides. There is nothing sinister or dangerous under there, probably. There is a seahood thread or two out there that has pics of the dusty gelcoat and hatch stop that reside under there. As long as the seahood screws aren't leaking rain or seawater into the cabin, then that's the only maintenance you need to do on the seahood.