Yes, the Dorkiest Boat Project Ever (tm, patent pending, void where prohibited by law, some settling may have occurred during shipping...)

Some of you may know, I have the only Golden Retriever in history who is scared of water. I've had Goldens pretty much my whole life, and with most of them it was a struggle to keep them OUT of the water. This one... not so much. "Rebel" (so named because he decides when and if he feels like doing what he's told - you can actually watch him think about it) literally runs and hides when the sprinklers go on. It would be funny... almost... except water is what the boat lives in.

And I'd really like to bring him on the boat. I think he'd enjoy it... except for all the water.

Thus began the longest-running project so far: getting Rebel on the boat.

Last year I tried walking him down to the docks. He did fine until we got to the top of the ramp, and then he saw all the water and freaked. He laid down and, in a clear violation of the laws of physics, became infinitely-heavy. Completely immovable. (it would be funny, except...)

Over the course of the summer last year, he got acclimatized to a point. To the point where he would walk down the ramp, out on the main dock and even onto the C-aisle where Makana is tied. But if we went to turn down the finger between Makana and her next-door neighbor... that infinitely-heavy-and-immovable thing came back into play.

Tried alternative tactics. Bought a kiddy-pool from WalMart, put about a half-inch of water into it and then tossed his favorite toy into the center. He just sat next to the pool, looking sad, telepathically shouting "it's so close and yet I just can't get to it!". Even when I stood in the pool and coaxed him, he wouldn't come get it. Rebel embodies his name.

At the end of last summer, I had failed to get Rebel on the boat. I hadn't even gotten Rebel to walk down the finger next to the boat. But... I'm at LEAST as stubborn as he is. And (I'd argue) more devious.

So this year I pulled out some dirty tricks. Turns out a little bit of beef jerky from Costco acts like perwinkle kryptonite - its presence eliminates all inhibitions. Including, apparently, awareness of water. With a handful of beef jerky, Rebel was willing to follow me all over the docks, even down the narrow finger between boats.

Enough that it made me think he might actually get on the boat, some day.

In anticipation of that day, I took on the Dorkiest Boat Project Ever. I built a (removable) platform over the forward half of Makana's cockpit - shaped to fit nice and level and secure (without having to drill any holes in the boat), and covered with indoor/outdoor carpet. Partly so Rebel would be able to "grip" something with his toenails. And partly so those toenails wouldn't mess up Makana's gelcoat. Yeah, I know. 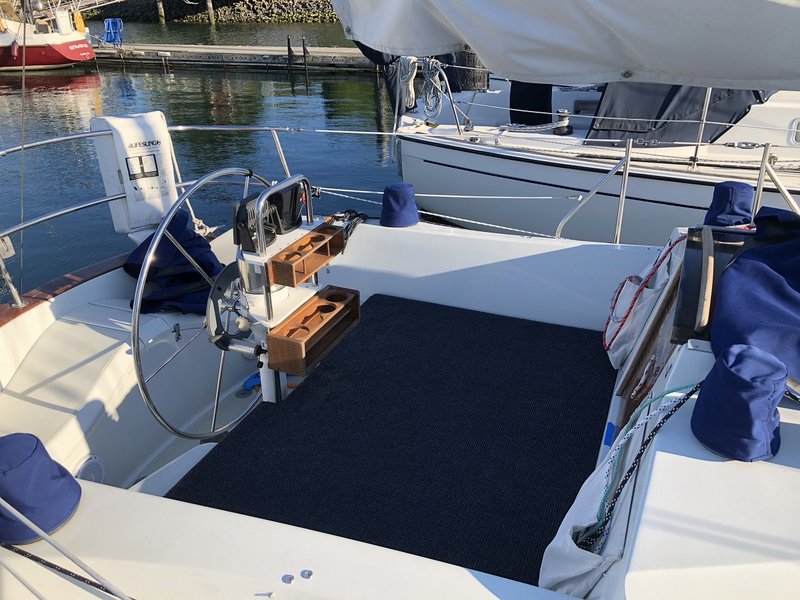 End of July, we went for it. With a handful of beef jerky, I walked down the ramp, up the main dock, along the aisle, out onto the finger and - without hesitating - right up onto the boat.

And he followed me up - without hesitating - as if he'd done it his whole life. Progress!

I kept that first time short and sweet - sat with him on the platform for a few minutes, told him what a brave (?) dog he is, and got off. Rebel seemed to be remarkably unphased by the whole thing. I felt like we'd successfully landed a probe on Mars.

Next time un-did that a bit. Same approach, handful of beef jerky, but... he figured he could follow me without using the dock-step. He got his front paws up on the boat, pushed off with his back legs, and next thing either of us knew he was in the water.

OK, so, on the bright side, he figured out how to dog-paddle pretty quickly. And I figured out how to lift a wet panicky 85-pound dog back onto the dock. I guess that time at the gym really hasn't been wasted. But the really bright side was - as soon as he was back on the dock and had a chance to shake off a bit... he started looking for that handful of beef jerky. So I shoved the dock-step in front of the gate where he couldn't avoid it, stepped up onto the boat and he followed me like nothing had gone awry.

Well, truth be told, I think he followed the beef jerky. But let's not get caught up in semantics.

Over the last several weeks I've stretched Rebel's experiences, a little bit at a time. Got him on the boat and started the motor (THAT freaked him out a bit!). Next time, started the motor and took a short putt around the marina. Then a longer putt. Then out into the channel. Each time, he was a very nervous dog at the beginning, but as he realized the sounds and sights weren't signs of imminent dhoom, he became less concerned about them. And even started to relax a bit. Stood up, looked around, even wagged his tail a bit.

Thus encouraged, I took him on an hour-long cruise out into Port Gardner Bay last weekend. His first time in "open water". A little bit of breeze, a little bit of chop, but after a few minutes he was fine.

So.... yesterday he went on his first "trip" on the boat. 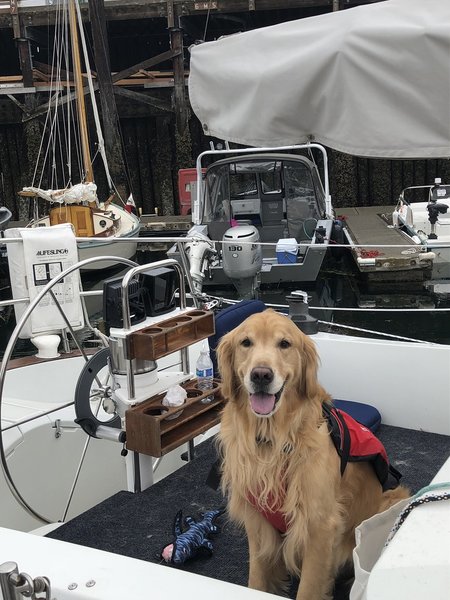 Yup, that's a picture of Total Victory. Or, more specifically, Rebel on the boat in Langley Marina on Whidbey Island yesterday afternoon.

We left about 9am, motor-sailed to Langley, got off the boat and wandered into town to share a bacon-cheeseburger, got back on the boat and were back in Everett by 3. So my scared-of-water Golden now has nearly 20 sea-miles in his log, and (so far) seems completely nonchalant about the accomplishment. In fact, now his ears perk up and his tail wags when he hears the word "boat".

I, on the other hand, am over the moon. It's been a long road, but... it looks like the door has finally cracked open to bringing the dog on boat trips.

All thanks to Costco beef jerky, and the Dorkiest Boat Project Ever.
About author

bgary
Worked at Ericson a million years ago, part-owner of E-34 #7, delighted to be back on the water.

That's a great story. Pictures would be appreciated.

GrandpaSteve;bt1788 said:
Pictures would be appreciated.
Click to expand...

Huh. it had pictures in it, not sure what happened. I've re-added them, can you see them now?
Yes - good dog!
Bravo to both of you!!
I sent your blog link over to a friend who has been introducing his labradoodle (sp) to his just-purchased old trawler. After buying a folding ramp to help the dog get in and out, without any further hesitation, his dog then leaped into the boat. Beef jerky was not involved, FWIW


And some folks think that cats are enigmatic!

Loren Beach;bt1792 said:
...his dog then leaped into the boat
Click to expand...

Yeah, that's what I'd generally expect from a Golden/Lab/Newfie. All my past Goldens have been water dogs. This guy is ... miswired.

It's partly my fault. All my past dogs went on adventures when they were young.... I had a vet who opined that "anything you expose your dog to before he's 6 months old will never bother him." So we'd go on roadtrips, we'd go to the beach or the river, we'd walk on crowded downtown streets, etc, all before they were 6 months old, and so they were unphased by just about anything.

Well, so, this guy turns out to have "pica" - he eats rocks, among other things. Obsessively. Which is Really Bad (they can kill a dog), and it means that he couldn't be left alone outdoors to "be a dog" (still can't in fact) and has to be kept away from any inedible things that might fit in his mouth (pinecones, golf-balls, coins, litter...). So rather than going on adventures and being exposed to the world in his first 6 months, he spent most of his first year in my family room.

That means that pretty much EVERYTHING outdoors is new to him. When the wind blows and the trees move, it freaks him out. Every. Single. Time.

The weird thing is, he doesn't raise an eyebrow about the things we'd think would bother him. Fireworks? Sirens? No problem. But sprinklers? GAAHHHH! Run away!

Bit by bit we're expanding his world. The boat is a big step. He's a bright, wonderful, loving dog. Just... a little miswired.

Oh, and the beef jerky is a MAJOR win in my world. the aptly-named Rebel has never cared about treats, which has severely impacted "training". He pretty much does what he feels like doing - if you tell him to "come", he'll stand there and think about it for a bit and then decide whether he feels like doing it or not. Most Goldens have an "I really want to please you" gene. This one does not. So it's been a challenge. The beef jerky is literally the first thing we've found that he'll actually "do something" to get. Winning!
What a great story! Love it.
I'll build a ramp for my wife.
Still grinning after reading, this is one of my favorite postings. Thanks!
Nice work, Bruce, and a great story. It was good to have a chance to chat with you way back early in August. We fixed the cooling problem on the Project and made it to Desolation Sound. Just got back home this week. More to come on that.

Cheers!
Craig
I sympathize! We have a labradoodle. She is a great dog, but she weighs about 60 lbs. In our E26-2, we get on and off the dinghy via the swim ladder. When we take the dog to Block Island, we either hang on a hook or grab a mooring ball. So dinghy rides for all. After the first year, when she was a pup of 30 lbs, one of my winter projects was to build a doggie ramp that rests on the swim ladder (we pick up the end of the swim ladder and rest it on the bow of the dinghy). She's not that excited about that ramp, but she does enjoy the dinghy rides.
You must log in or register to reply here.