SailFlow isn't insane. it's like the old saying about Chicago weather. If you don't like it, wait a minute it will change!!
She looks good to go!

Grizz said:
Yes, we're "one of those..." whose race starts on Friday. We're all checked in, have our transponder and Section Flag mounted and the Swag Bag is stowed in the cabin, ready to disperse contents tomorrow morning.
New crappy yellow line has been spliced and the MOB components have been remounted. Check.
Jack lines mounted. Check.
Thermos added to the final 'walk on bag'. Check. (whew!)

SailFow must have been experiencing temporary insanity, 'cuz today's forecast looks NOTHING like yesterday's, more inline with ALL the other forecasting platforms. (another 'whew!')

Here's how she looked on departure early this afternoon. Time for a (final?) good meal and some sleep...
Click to expand...

Unfortunately, it is on wheels, not on a boat. :-(

The Cliff Notes version (uh oh, that may send some to Father Google) is we were on port tack, double reefed and headsail furled (a bit) in 18-20 knot wind on lumpy/sloppy Lake Michigan 4'-6' square waves. We were saling to, or beyond, our polars in these conditions at @ 6+knots Those that have experienced these waves and conditions know they are not fun. There was no excessive weather helm, inducing a bit of spray as we punched through the random wave crest we couldn't avoid. Late afternoon/early evening July overcast sky daylight.

The crew member below deck came up, all crew in pfd's. The boat, eventually, stopped. We marked our position as a MOB, called a Pan Pan on the handheld VHF and began to assess. The 1st item, all (now) caught on GoPro, which someone had the sense to turn on, was to warn all crew 'do NOT put yourself inside shrouds, halyards or running rigging, just in case the rig goes over the side unexpectedly.'

We disconnected the forestay/furler, detached the backstay, saving the Navtek adjuster. The boom was disconnected and put to the side. There was no chance of saving the mainsail or the headsail. The mast sheared off @ 6" above the partner and was probably bent/fractured at the top spreader, probably the result of a failure at D2. We'll never know for certain, unless someone dives the lakebed and retrieves the rig. Not happening...

The base of the mast was the most dangerous component, the lumpy/sloppy waves causing it to flex, torque and move. It's movement was somewhat prevented by the jib halyard and 2 of the port side shrouds. We freed up pieces and parts sequentially and carefully, until it "came time", with the forestay and furler thrown off, followed quickly by the pin holding the turnbuckle of the final port side shroud pounded out. The rig at this point was almost free, just the jib halyard holding it in position, which was frayed and taught, incredibly taught. The knife barely touched it and it went 'Ping!' and the rig was free, kicked over the side without touching the hull. The vang, the last item to go, was initially snagged, then cleared and thrown off. The rig sank out of sight in less than 5 seconds. Gone.

We waited @ 5 minutes for 'it' to sink some more and also allow the boat to drift away from the event area, verified that were no halyards or lines visible, perhaps said a silent prayer and then engaged the tranny to begin a 4 hour slog home in quartering/wallowing/lumpy waves @ 6.5 knots. Ugh.

The CYC Race Committee was called as soon as cell connection was available (@ 10 PM), 'cuz the rules state you've got to call them to announce your retirement. The RC member that answered, a very comforting voice to hear, eventually stated "we were expecting this call, cuz we were monitoring your YB track". Funny.

There's still some Mac paperwork to complete, and then the mountain of other paperwork. Ugh. The numbness is subsiding.

Mostly for historical hysterical record, there's this, which happens when a YB transponder drives up to Mackinac Island. Does this mean Shoe String's transponder was 1st to finish? Me thinks yes...

Are you going with a carbon fiber mast?

Ballinger spars in Santa Cruz CA has made a couple of Olson 34 spars. One was carbon, the other aluminum.

Bruce Nesbit while he owned Razzberries replaced his mast as a preventive measure when he observed cracking around the topping lift exit pulley. It is in the same proximity as the second spreader. I have never seen any signs of similar cracks on my rig, but it is something to ponder. It should be noted that Bruce sailed a couple of Transpacs possibly stressing the rig. That said, it is a downwind race for the most part unlike your beat into square chop.

Do you use running back stays in those conditions? Also, do you have the short or tall mast?

2nd Buzz Ballenger reference today! My 1st exposer was him supplying the replacement sheaves when I swapped out the (ancient) OEM wire-to-ripe sheaves of the masthead.
Because I’m essentially a functional idiot (generous self assessment), I have no clue if it was a tall or short rig. I have the mainsail sail certificate, the luff number should provide a hint, right?
Carbon rig sounds sexy, but she’s a 32 year old Fresh Water boat, at what point does 1 say ‘enough!’? Even an aluminum rig as a replacement may be too much.
I’m certain my insurance carrier will hate me tomorrow!
Still numb, getting less…

I have attached a copy of my PHRF Certificate for reference. Tall rig was about 2 feet taller. I rate 105 and tall rig is 99.

Thanks for this, I’ll compare to my PHRF, which is also 105. I’m betting tall rig (but not a lot of $!)
Another Buzz B reference just came in from a fellow Lake Michigan sailor. Rock star!

Thank you for the report. And thank God that you and your crew are safe! Great to hear that there was no damage to the vessel itself.

Senior Moderator
Blogs Author
Local riggers also recommend Buzz B, for what it's worth.

Wonder if Buzz knows how appreciated he is…
Thanks Alan, yes, things could have gone much further south.
Technically, there was some boat damage, as the upper lifeline snapped like a kite string and the forward teak trim eyebrow looks like a spastic beaver attacked it. Both easily replaced!
Last edited: Jul 18, 2021
J

Sorry to hear! Glad all are safe. 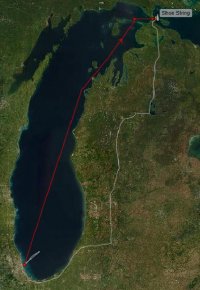 Wow… conditions were “lumpy”.. I was watching our spar go through more than one pretzel gyrations; we finished Monday night… sorry to hear what happened

Thanks to all who have chimed in with thoughts, they're appreciated. Charlie's PHRF Cert helped compare rigs, now I know it was a tall rig, as our #'s are comparable, as well as the rating. The 2021 LMPHRF certificate is attached for reference purposes.

1 important item has been Sharpied, an item created when a vehicle is filled with 'Return Gear' and a delivery to St Ignace arranged and completed a week ago. St Ignace is in 'The Upper Peninsula', AKA phonetically as "The You Pee" and is a short ferry ride to/from Mackinac Island. With no boat arriving there, you gotta go get the aformentioned vehicle, which is @ an 8+ hour ride from Chicago...in a car. It was a 10-hour bus ride from Milwaukee, departed 8:15 PM CDT Sunday and arrived @ 6 AM CDT Monday. Long day, but afforded time to think, write notes and see lots of great country, reversing the same route the bus took north in darkness. Over the top of the UP, down the west side of Green Bay, down to Milwaukee and ultimately down into Illinois and a NW 'burb. Ugh.

Mac Incident/Retirement crafted and submitted (a Mac Regulation) this morning. Next up: insurance. Double Ugh.

Senior Moderator
Blogs Author
That certificate looks like a committee composed of the top brass from the Pentagon was involved it the process!

Next year, find 4 (minimum) other O-34's and Express 34's and race Level. Back to simple WYSIWYG racing.
And Yeah, I understand how the little things do make more of a difference in distance racing rather than buoy racing..... but still..... you know....

As for Shoestring, this will all work out somehow.
It. Just. Will.

Loren, I read this WYSIWYG, couldn't figure it out, tried a few options, none really worked. Is it 'Where You Sail Is Where You Go'? Or something even simpler?

Senior Moderator
Blogs Author
Old computer term, from the introduction of the Mac. "What You See Is What You Get". It was kinda new-fangled & radical in those days for the screen text and images to actually print out on paper just like they appeared on the screen.
And, another way to taunt frustrated DOS users......

New record for Chicago-Mackinac course (Scuttlebutt Sailing News)
"The 60-foot trimaran Areté owned by Rick Warner succeeded in their record-breaking attempt for the Chicago-Mackinac course, completing the 289 nautical-mile distance in 12:307. This improves the previous outright time of 17:59:49 set in 2017 by Il Mostro, a Volvo 70 monohull."