Anyone here have line bags installed on their 32-3 or similar T-style cockpit Ericson? Raced in relatively heavy wind (for us) and lines were all over the place, turning helming the boat into a figure skating competition.

Curious where they could go that doesn't interfere too badly - I'm contemplating hanging down in the slot between the aft bench and the port/starboard cockpit benches.

I did find Christian's old blog with some pics of line bags installed on a 32-3 here: 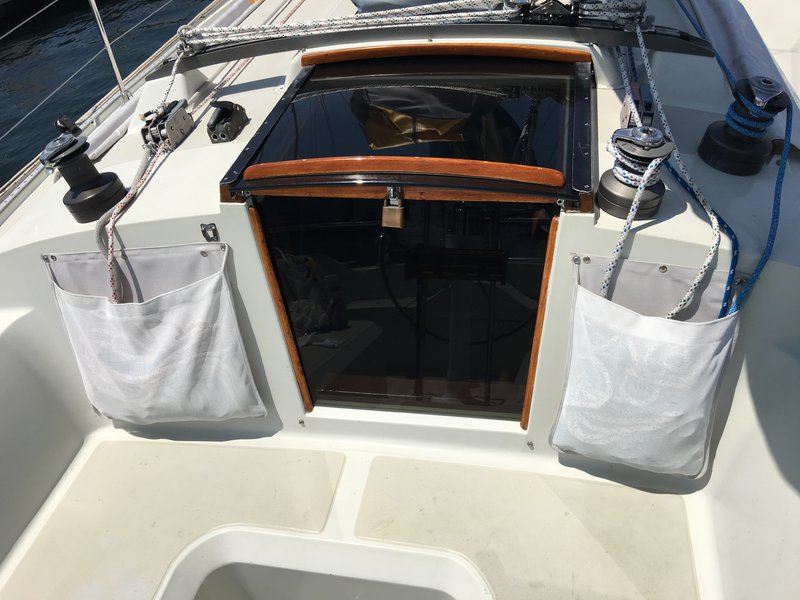 One-Piece Hatch Board Some things you never get used to, and of course we all never get used to different things. For me, it was three- or (arghh) four-piece hatch boards. I know it's tradition. Yes, they're sort of easier to store. OK, they...

Senior Moderator
Blogs Author
There does not seem to be a one-size-fits-all solution, IMHO. It can be a problem, tho. On our prior 26 footer and on our present 34, all the housetop line tails go into the cabin when under sail. That also helps -some- to keep them less tangled when dropping a sail and having them run back thru the clutches.

A sailmaker or upholstery shop can make any custom design. And of course sheet bags are a great first project for amateur sewmanship. (It's winter. anybody can get started with a $150 machine: Video ). They don't really need elastic at top--it gets worn out in a year anyhow.

I have found that the bigger the bag the better, but that even relatively small bags hold more sheet than you'd think.

I spent most of my life tossing halyards and sheets down the companionway. I still think that looks raaather nautical and traditional. It hardly bothered me at all that the lines always jammed under the companionway ladder, or that once, yanking mightily on a main sheet hung up during a hairy jibe, I sent the ladder flying and almost beheaded my wife down below. That was an earlier life, and wife. Line bags have made everything easier now.
Last edited: Jan 27, 2020

Blogs Author
There's a boat on my dock with a really extensive and impressive collection of deck canvas. They even have a set of sheet bags hanging on the bow pulpit, for the sheets of the furled genoa. I suspect they might also be used for dock lines when underway.

(The boat looks great, but that's not for me. I am far too lazy to spend that much time cinching little covers over every bit of deck hardware, after every sail. But I think that boat has a pretty large crew.)

For halyard tails, Christian's bags in the photo above work great. They keep lines out from underfoot and out of the companionway. And halyards are generally fussed with less, so putting the tail in the bag when the sail is raised, and sorting it out when it is time to drop is.... not onerous. A decent pit-crew pays a lot of attention to making sure lines will run free when needed.

For working lines, though, the equation is a bit different (IMO). You want bags that are near (ideally just below) the base of the winch, if for no other reason than it encourages the tailer/trimmer to actually stick the (jibsheet or spinnaker sheet) tail in the bag. More often than not they won't, because they're in a hurry to get done and up to the rail. A bag that isn't just below the winch is not going to get used, in my experience.

A half-step might be to instill some best practices with your trimmers. Make "when you're done with the tack, flake the tail on the cockpit seat so it's off the cockpit floor and will run freely when released" part of the SOP. That alone might make a meaningful difference.

Bags at the aft ends of the cockpit benches might be good for "storing" the spinnaker sheet tails when they're not in use. But my concern there would be making sure those tails have no chance of getting under the helmsman's feet or interfering with the wheel.