That is a great idea. No more diesel diapers!

In fact, I'm replacing the old bracket as we speak. I would have had it mostly back together last night, but, as I've been following MaineSail's post (www.pbase.com/mainecruising/u...rnator_bracket) religiously, I tried to use the larger, 10mm mounting bolt in the bracket. I only discovered last night that my original Motorala 55A alternator won't accept the bolt that large. Looking for a shop now to drill it out to 10mm. It's always somethin'.......

In fact, I'm replacing the old bracket as we speak. I would have had it mostly back together last night, but, as I've been following MaineSail's post (www.pbase.com/mainecruising/u...rnator_bracket) religiously, I tried to use the larger, 10mm mounting bolt in the bracket. I only discovered last night that my original Motorala 55A alternator won't accept the bolt that large. Looking for a shop now to drill it out to 10mm. It's always somethin'.......
Click to expand...

Good to know! I didn't know about this problem when I bought my boat, I was very relieved to have fixed it after I learned.

Christian Williams said:
I could turn off the master switch with my toe whilst still holding the diaper on the engine. Learned that from an orangutan.
Click to expand...

Not having a friendly orangutan to tutor me in such skills, I made a "cheat" this weekend.

This gives me a way - when the switch on deck is "on" - to turn the lift-pump on or off while leaning over the motor, without having to involve unnatural contortions or rhythmic gymnastics. 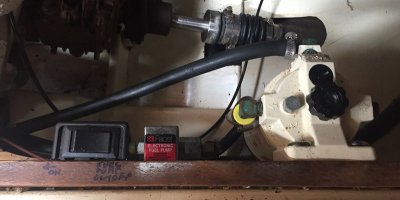 PS: It also - in theory - adds a bit of theft-deterrence to the boat. Since there is no key - just a pull switch and a start button - on the engine panel, someone could step onto the boat, start the motor and cruise away without ever having to turn a key or even get into the cabin. Now - if I remember to - I can turn off the power to that circuit down below and someone who doesn't know it is there won't be able to energize the lift pump. Not sure how far they'd be able to get on just the mechanical fuel pump and the fuel already in the lines, but... that's a different issue.
Last edited: Aug 7, 2017

This is the followup to an earlier post about replacing the fuel-bleed screw on an M25 injector pump with a "self-bleeding" valve and line. Self-bleeding is probably the wrong term; you still have to manually bleed the injector pump, after changing fuel filters, by running your electric fuel pump (though not the engine) until all the air is purged from the lines and filters. "Self-returning" is probably a better term in that, with the valve and line installed, you no longer have to catch the bled-off air and fuel in a cup or absorbent pads, it simply gets fed back to the fuel tank via the existing fuel return line. Here are the details:

The factory bleed screw on a Universal M25 is a metric M8x1.0 bolt (P/N 299748). Unlike normal pipe threads, it is not tapered, so it relies on a soft-metal (copper?) washer to form a seal with the bolt it threads into. View attachment 21712 The bleed screw actually has a hole bored all the way through it. Not sure why--I suppose if you could line the hole up properly, you might be able to bleed the pump without completely removing the bolt, by aiming the stream directly into a cup or something. Misalign it, though, or get fuel escaping around the threads, and you might get a face full of diesel fuel. Didn't want to try that one.

Later model M25XP's came with a self-returning bleed already installed. To convert an older engine, you could replace both the old bleed screw (above) and the bleed bolt (housing) that it screws into. The parts are:

I tried to do it without buying these parts. I looked for an M8x1.0-to-1/8"NPT thread adapter so I could use my original bleed screw housing with off-the-shelf valves. I was never able to find the right combination. Instead, I had a machine shop tap out the top of my original housing bolt to 1/8 NPT. The guy charged me a half-case of Coors Light and has helped me out with other parts since then.

With the housing bolt tapped out to a normal pipe-fitting size, I just had to find the right valve. Interestingly, I found this on a go-kart website: http://bowmanenterprise.webs.com/apps/webstore/products/show/4527939 for $6.00. It's all-steel construction and seems to be well-made. I primed and painted it for corrosion protection. This screwed right into the newly tapped-out housing bolt.
View attachment 21711

So, to bleed the fuel lines now, all I do is twist the bleed valve full-open and run the electric fuel pump for a few minutes. The bled-off air and fuel is then dumped into the return line (the line that exits the lower left corner of the picture) and ends up being dumped back into the top of the fuel tank. Should save a lot of time and clean-up come launch this spring.......
Click to expand...

I just had a hair-raising experience, attempting to land at St. Francis Yacht Club in SF in 25kts of wind and a 3-4kt flood current. Single-handed. And no auto-pilot. The engine went out as soon as I put the sails down. Bleeding the fuel lines helped, but it was a little hectic watching for traffic, bobbing around in the surf, and working with tools at the same time.

Thanks for the tips, Ken!!