Moderator
Blogs Author
This old (2009) article from PS identifies questions and answers that often come up for owners of Bruce King designs.

What are performance tradeoffs when beam is carried aft, as in all current cruising boat design?

What are penalties for raising the deck and topsides of modern sailboats?

How does an Ericson 41 compare to a Beneteau 46?

What marketing forces have affected yacht design and how has performance played out?

Theoretical hull speed of an Ericson vs. that of a current widebody? (answer may surprise)

Interesting reading, some of which can be disputed, but there's no doubt the new boats around us are different from ours. 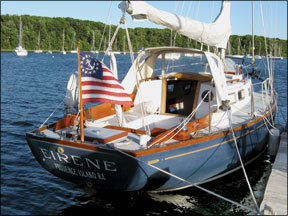 Practical Sailor editors have noticed the increasing tendency in newer-model sailboats to be ill-mannered in gusty conditions. Establishing balance between the sails and the hull is one of the main factors in quality boat design. For correct trim, many things must be considered: the ballast...

Moderator
Thanks for the link and information Christian,
The PS article gives me a better perspective of the 1983 E-30+ design.

I think our boats are prettier. I think of it as being back when they still thought they had to shape fiberglass like wood.

Moderator
Blogs Author
To borrow a wisecrack from the old days, if the Kennedy Center is the box that the Watergate Hotel came in, then this Beneteau 40 interior is the shipping container that protected my Ericson teak from harm. 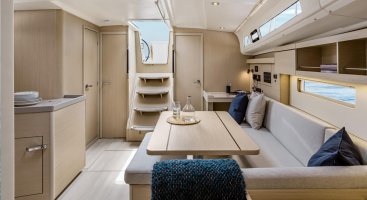 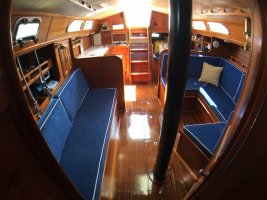 The Benetaeu is fast off the wind. You lose the fillings in your teeth upwind in a chop. My ride in a little smaller version of this boat was most unpleasant. Of course our Straights are most choppy. If you have a fat backside, you need a broad flat bow to counterbalance it. Hence you lose your fillings. My Ericson doesn't pound. For a cockpit to party in, the Benetaeu is unbeatable.

Christian Williams said:
... Beneteau 40 interior is the shipping container that protected my Ericson teak from harm.
Click to expand...

Even though I fiercely love my E34, I can't say that I find the interior esthetically pleasing. Look, it's a fiberglass boat. Why does try to make me feel that I am living inside a tree? I'm not a squirrel or anything...

I'm an amateur woodworker, and I am convinced that wood has its place, but in proportion and with good taste. Here's an example of what I would consider as a balanced, satisfying use of that material: 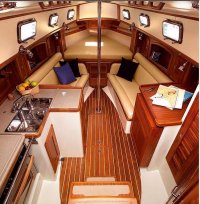 The Bend-your-toe interior reminds me of Ikea grade furniture. You know these kind of articles about yacht design never mention one of the most important characteristics of a cruising boat. That would be the stability curve and righting moment. Some designs out there will happily float inverted after being knocked down. I am happy to report that where Ericsons were concerned, they are safe boats for the most part in that regard.

Senior Moderator
Blogs Author
I do not recall the year, but about 15 years ago, Ted Brewer NA, penned a long article about the changes in sailboat design. He observed that a lot of problems in handling came from the marketing success of builders designing their boats "from the inside out" , i.e. laying out a large interior living area, and then forcing a hull form to fit around it.
He was proud to be in the other group, where - for a given length - the hull was designed first and then the accommodations were designed into it.

I have done a rough delivery on a Catalina 42, where the boat slammed its 14 foot beam into 5 foot seas about 7 seconds apart, all of a long day, and we found safe harbor and got off the ocean at sundown. We had made about 50 miles of progress. After several days the sea smoothed out again and the boat finished its trip up to the Straits. Marvelous boat at the dock, where that huge interior makes a nice condo to live in.
Even tho it's a heavy boat and felt pretty "safe"... the whole boat still was flexing enough to have water dripping from almost every single port and hatch, from the green water running down the decks. Note that this is often the weather in the afternoons in the summers here.

And then there the deliveries in boats designed by Bob Perry, Bruce King, Bob Smith, Doug Pertersen, and Ted Brewer... whole 'nuther experience!

There is a 16 year old Beneteau 36 next to my E35. His slot piers are 2.5 feet wider than mine and he still scrapes both rear sides of his hull getting in and out. His freeboard is higher than mine and therefore catches the wind very easily when docking. He has a lot more cockpit width than I do. As a result, he very rarely sails.....camps out on weekends sometimes.

Teranodon said:
Even though I fiercely love my E34, I can't say that I find the interior esthetically pleasing. Look, it's a fiberglass boat. Why does try to make me feel that I am living inside a tree? I'm not a squirrel or anything...

I'm an amateur woodworker, and I am convinced that wood has its place, but in proportion and with good taste. Here's an example of what I would consider as a balanced, satisfying use of that material:

I agree with you. That is one beautiful interior. It eschews both the Ikea and the peat bog aesthetic.
H

I assume that the photo is of the E34 and it looks nothing like my interior (87 E34). The galley is completely different and I dont see the keel stepped mast. I sort of like the absence of doors for the Vee berth but then no privacy if another couple comes aboard.
C

The club's Beneteau aft cabin, affectionately nick-named the "love shack" was useless for a good night's rest. The hull slap when anchored bow & stern was like listening to a door knocker all night long. The wave effect was lessoned somewhat in the saloon, but back in the shack was like trying to sleep in a bass drum..

Moderator
Blogs Author
I was moored at a somewhat roll-y cove this weekend, just enough backwash to rock the boats until things calmed down before dawn.

It was possible, from ashore, to study the rolling of 50 moored boats. A mast is a pretty good indicator, waving back and forth as a measurement signal.

Half of the boats were newish widebody designs, the rest mixed, the study group all 35-45 LOA.

We all rolled the same. That surprised me.
S

The wider flatter hull of the "B" should roll about the same amount but snap more at the ends of the rolls making the roll much more intolerable. Rolling at anchor isn't fun in either model.

In a slight aside, The skippers of the Vendee Globe race are apparently wearing ear muffs because the crashing of the waves on the very fast moving hulls is deafening. I guess that's fun.

Moderator
Blogs Author
I came out a monohull guy after five Bermuda races in my father's Newick Native 38' trimaran. The boat could hit 15 knots to windward and 25 knots off the wind. In a typical seaway it felt like a windsurfer (light, leaping wavetops, never plowing through anything), a truly unusual sailboat experience. The motion wasn't bad, heel was minimal (the boat accelerated, rather than heeling), and it had tiller steering and fingertip control. 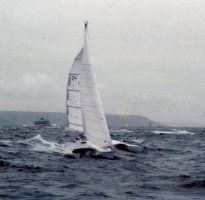 Sistership
However, the price of all that was spray that hit like pebbles thrown up by a truck, very sharp movements for those below, and a continual sensation of being in a race car going flat out in 24 Hours of Le Mans. This was exacerbated by the fact we were always racing, and you didn;t feel right backing off, and so you pushed harder through every squall. Trimarans can capsize, and they do. The drill when overpowered is to head off, not up, so as not to increase the turnover rate. It is not so bad when on deck. Off watch, relying on the experience and skill of those in the cockpit, well, yeah. Hard to sleep.

Racing trimarans were newly popular in the 70s and 80s, about the same time as the Ericson heyday. All you needed was a 25' wide slip and to carry no gear (tris are weight sensitive; Let's Go had no engine and we weighed everything, and everybody, that came aboard). Nowadays cruising catamarans have proven much more marketable, carry lots of gear, and can make fast passages.

It often surprises me to wind up, by choice, with a traditional lead mine that goes six knots. Go figure.

Senior Moderator
Blogs Author
All lead mines are not the same, and average speeds may not be all that informative either, IMHO.
Almost beside us is an Alajuela 38 (circumnavigated by the couple that own it), and an Ericson 38-200. I have been on the 38-200 doing 8 knots under sail and also power. I know that I do like the dinghy-like acceleration of the Ericson.

While I probably would enjoy a long passage more on the big E-boat, I would not turn down any delivery on the very-well-equipped A-38, either.

Of course, neither will come close to the daily miles of a multihull. "Everything's a compromise" as they say.