How do I know when I’ve pumped enough grease into the zerk fitting on the rudder post?

Also, what are lubricating the chain in the binnacle with? 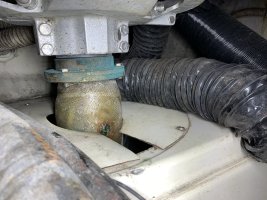 Senior Moderator
Blogs Author
I just pump till no more grease will go in. My 32-3 once took three full 3 oz. cannisters, but it had a big void after years of neglect. My current boat only admits a little grease, after which no more can be forced in.

To my mind, any good lube works for the chain and the quadrant box sheaves.

On my E32-3, I found it after folding myself in thirds and spelunking in the aft (port side) lazerette. Once I got in there, I was able to see it. I was not able to touch it, but the (full size) grease gun hose was able to reach between the quadrant and the cockpit floor. Unfortunately, the zerk was totally rusted internally so I could not force grease into it. Fortunately I was able to unscrew it with a socket on a couple of extensions and screw in a replacement the same way. I put a little tape in the socket to hold the new zerk by friction and then spun it until I got lucky.

After greasing the upper bearing, my steering was noticeably smoother.

Senior Moderator
Blogs Author
I don't think I had a top Zerk on my 32-3. I used to ladle grease on where the post is visible in the top bearing, and it seemed to me it worked its way down into the bushing. You can see the post turn as you wiggle the wheel, and the grease likely finds its way. 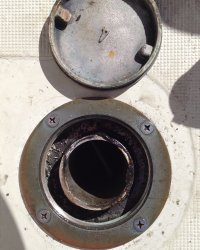 By the way, those four Phillips machine screws hold the top bushing in place. If (with the top plate off) the rudder post is seen to move around visibly when sailing, , or clunks when you tack, the nuts on the machine screws* may have fallen off under the cockpit. That leaves the bushing assembly loose, which lets the post flop around. You can't identify a loose bushing from this static view, since the flange is imbedded in the deck and cannot wobble.

That's harder to explain than to see. You have to be sailing, and take the plate off, to see the rudder post wobble. It's not under side pressure at the dock.

Alternatively you can crawl under the cockpit and check the nuts, which is a contortion on that particular boat.

*The nuts on the machine screws, and the underdeck bushing, are visible in Jerry's photo in the next post.
Last edited: Aug 29, 2022

Picture of the upper zerk on the E32-3 rudder post. This was taken from the aft lazerette so the picture is looking forward and the zerk points to port. It is essentially impossible to see by looking in the lazerette without actually getting into it. Once you get in, it is clearly visible and relatively easy to grease. I greased mine liberally (once I replaced the rusted shut zerk). After pumping a bunch of grease blindly, I found the grease squeezed out below the zerk. I cleaned it off as best I could using a paper towel on a screwdriver. 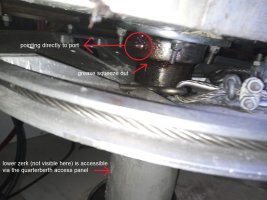 Blogs Author
what size zerk fitting does this take? the fitting on my rudder tube is rusted so bad it no longer resembles a grease fitting. It looks more like a brown bump.

trickdhat said:
what size zerk fitting does this take?
Click to expand...

I bought a blister pack of fittings (various angles) from the local hardware store. The pack is still on board so I cannot verify it, but they should be 1/4"-28. The hardware store zerks are likely plated steel but I'm in fresh water and the zerk should stay dry so rust is not a major issue for me. If I get ambitious, I might swap my zerks out for stainless but probably not.

Accessibility without removing the quadrant is strictly via sockets with about 10" of extensions. No room for fingers or vice-grips. You should be able to spray it with a penetratingly oil (Kroil, PB Blaster, etc.) - most of them shoot a pretty good stream. Here's to hoping you get lucky with your zerk and it comes out without a fight.

Addendum: If you cannot get the zerk off, I would use @Christian Williams technique of greasing it from the top via the access plate. Lubricating the bearing is important. My steering force was not excessive but it went down noticeably after greasing.
Last edited: Aug 29, 2022

Senior Moderator
Blogs Author
Re grease fitting size: When I installed a Zerk I went to a larger size, and stainless steel. Just seemed more appropriate. Internet source nowadays, cheap. May need a size-compatible hose on the grease gun.

"I picked up a new half-inch stainless Zerk fitting with a quarter-inch inlet from a boatyard parts department. I drilled a half inch hole in the side of the rudder tube as deep as the Zerk threads. This didn't penetrate through tube to post. I drilled further with a quarter-inch bit, carefully probing. When I thought I was all the way through it was out of the slip again, full speed ahead again, down into the after berth again--and indeed water was squirting out of the new Zerk hole, proof of an open path to the inside of the tube. 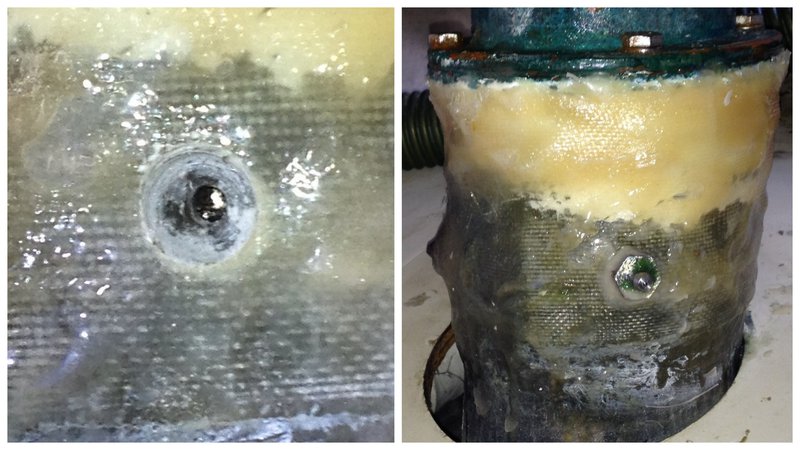 I glued the new Zerk in with thickened epoxy and when it cured pumped in three 3-ounce tubes of marine grease through the new nipple."