Thought it wouldn't happen to me

Just saw this. Bought my E34 last November and still trying to find my way around it as I do minor fixes...
Where would I find this trailer plug. If it’s still there, I want to get at it ASAP.

Bobby Steele said:
Just saw this. Bought my E34 last November and still trying to find my way around it as I do minor fixes...
Where would I find this trailer plug. If it’s still there, I want to get at it ASAP.
Click to expand...

There are probably two of these connectors in the much-taped-up factory installed wiring harness between the engine and the panel in the cockpit. There is one where the engine-related circuit wires are gathered up and were fed into one plug, in the engine compartment. Then there is a plug close to the back of the panel where the same plug was installed.

Then... then.... (pause for dramatic effect).... there was a connecting wire bundle - same color coded wires - and this connector was likely offered in a couple of stock lengths by Universal/Westerbeke as supplied with the engine package. The builder (EY in this case, and there were a number of other high volume builders, like Catalina) picked the bundle link that fit the largest number of their boats with similar engines and panels. The wiring could have been the same for several of the 80's models like the 32, 34, 35, and the Olson.

The chance that the length of the connector was "just right" was pretty statistically low, and I know that there was quite a coil of excess under our cockpit for our M25XP.

Since not only were the plugs grossly undersized, some of the wires were also undersized for the planned current, and any extra length also reduced the current flow potential. (Sigh... mutter... mutter... )
While I fault EY to some extent, I also fault Universal/Westerbeke even more. It's not like Ohm's Law was some sort of new fangled unproven idea in the 80's.

And, welcome again to the site. There is a LOT of good information here about your boat model as well as similar ones with the same parts. For instance our electrical panel is the same model as yours and another larger Ericson.

There are literally hundreds that will work. Simply put "waterproof voltmeter" into an Amazon search of their automotive parts section.
The key here is not replacing the ammeter with a voltmeter. The key is removing the high amperage from going through the trailer connectors.This means the orange (#4) and the red (#5) ones shown on the wiring diagram.

Below is the 32-3 wiring diagram and you can see the two connectors are shown at either end of the extension harness.

Bobby Steele -
I found one wrapped into the wire bundle near the engine starter: 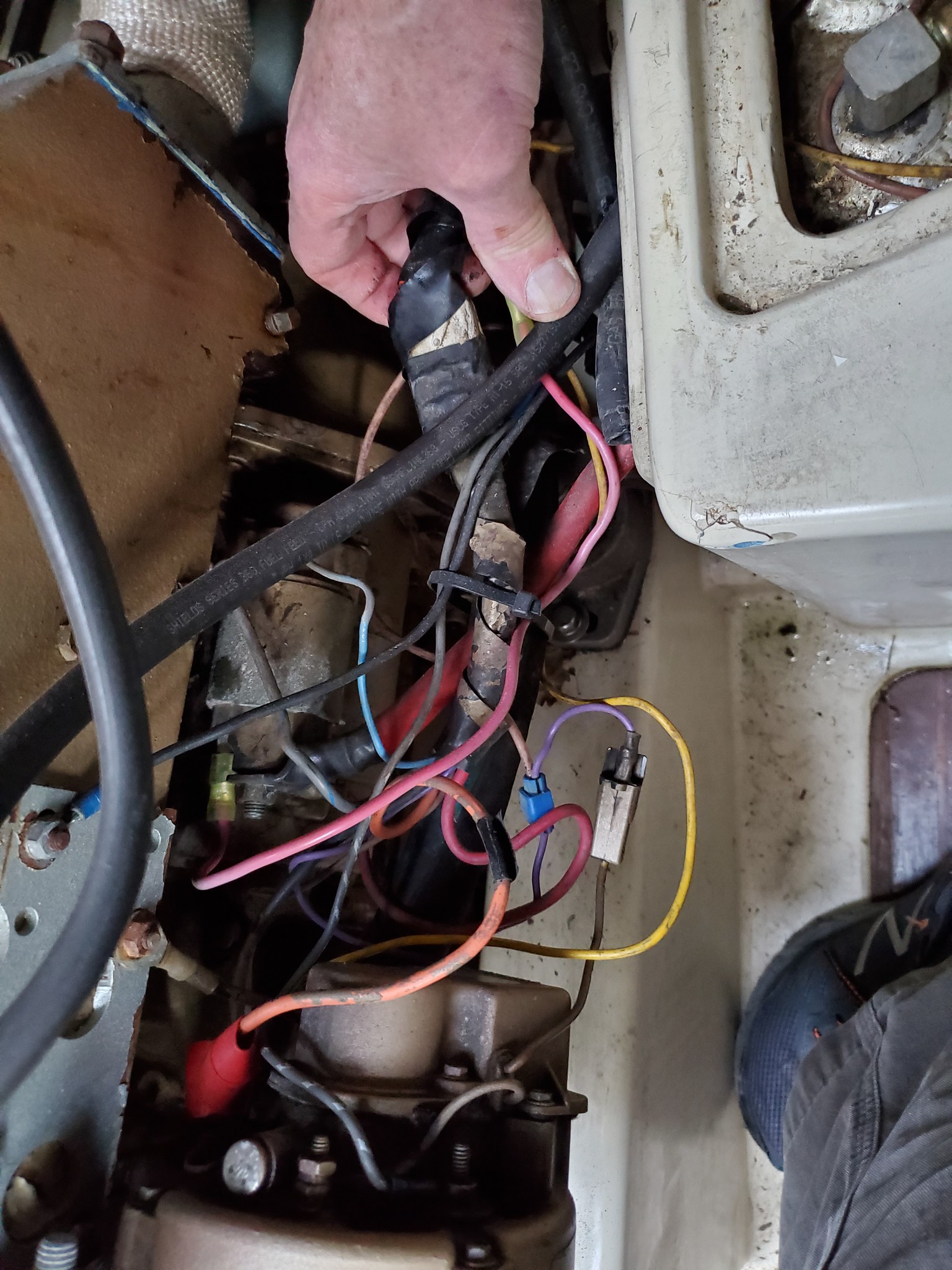 and a second near the instrument panel, hidden beneath the deck.
Last edited: Oct 5, 2020
E

We have an E34. We have three sets of trailer plugs. The first set is in the engine compartment in the cable bundle that is on the port side of the engine. Should be relatively easy to find, but you may have to unwrap some electrical tape to find it.

Here is a picture of what I found after removing the lazarette bulkhead. That's about 6 feet of cable and 14 tie wraps to span the 18" gap between connectors. 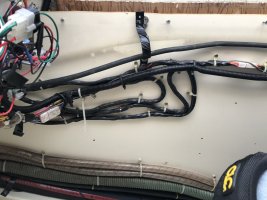 If you look closely at the left connector, you can see that the red wire on the connector has already been cut and bypassed with a replacement red wire by a previous owner.

While you are there, you might peek under the cockpit control panel cover. It might want attention, too. 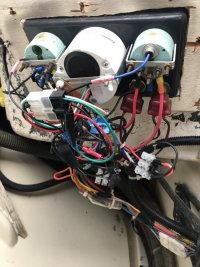 Thanks, everyone. Looks like another project, right after I finish my Airhead installation. Fortunately, that included removal of the old holding tank - so removing the bulkhead won’t be too difficult as long as the screws cooperate. A previous owner seems to have done some rewiring, but left the old wires hanging loose. I’ll be gradually removing them as I go.
This is a great forum, and it makes my wife and I even happier to have obtained an Ericson, after losing out Newport 28 in a storm last October. We’d already become fans of Christian Williams videos on YouTube without realizing he was sailing an Ericson as well.

Senior Moderator
Blogs Author
Glad you are enjoying your boat and the camaraderie here.
I have benefited much and often from the wisdom and encouragement of other owners here for the last two decades.

Moderator
Blogs Author
I would've sunk long ago without the buoyancy of the forum.

Christian Williams said:
I would've sunk long ago without the buoyancy of the forum.
Click to expand... 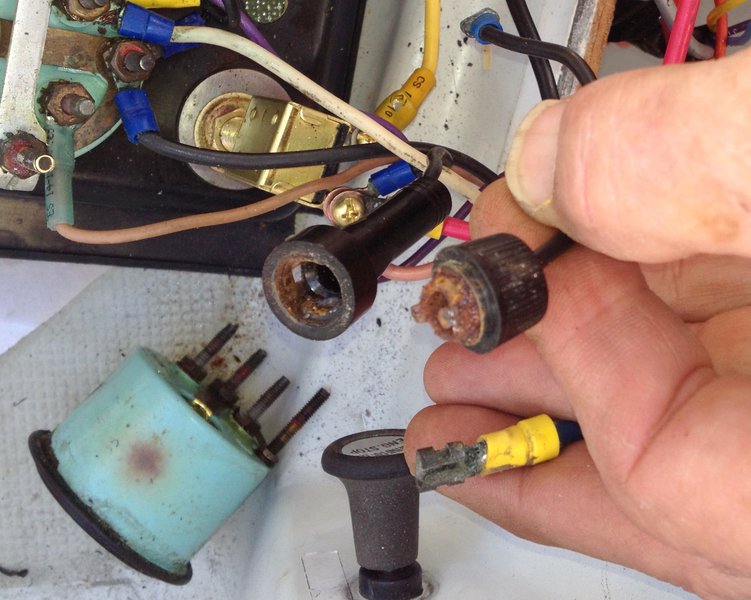 Why bother? Well, twice last year my M25 diesel wouldn't start up again after being turned off. I could jump the solenoid with a screwdriver--if there was someone in the cockpit to hold down the paired glow plug and starter buttons. When it...

Again... this site is AWESOME!!. I found the mass of wires in the engine compartment, and it feels like there’s a trailer plug wrapped in there.
I also notice the red/yellow wire has been disconnected at both ends and is just hanging there with the rest of the bundle.
More questions later.
Thanks to all.

Moderator
You may be able to use this version of the OEM wiring diagrams, which combines what was in several sources, including the page shown above. What is shown in yellow are issues found with my boat. 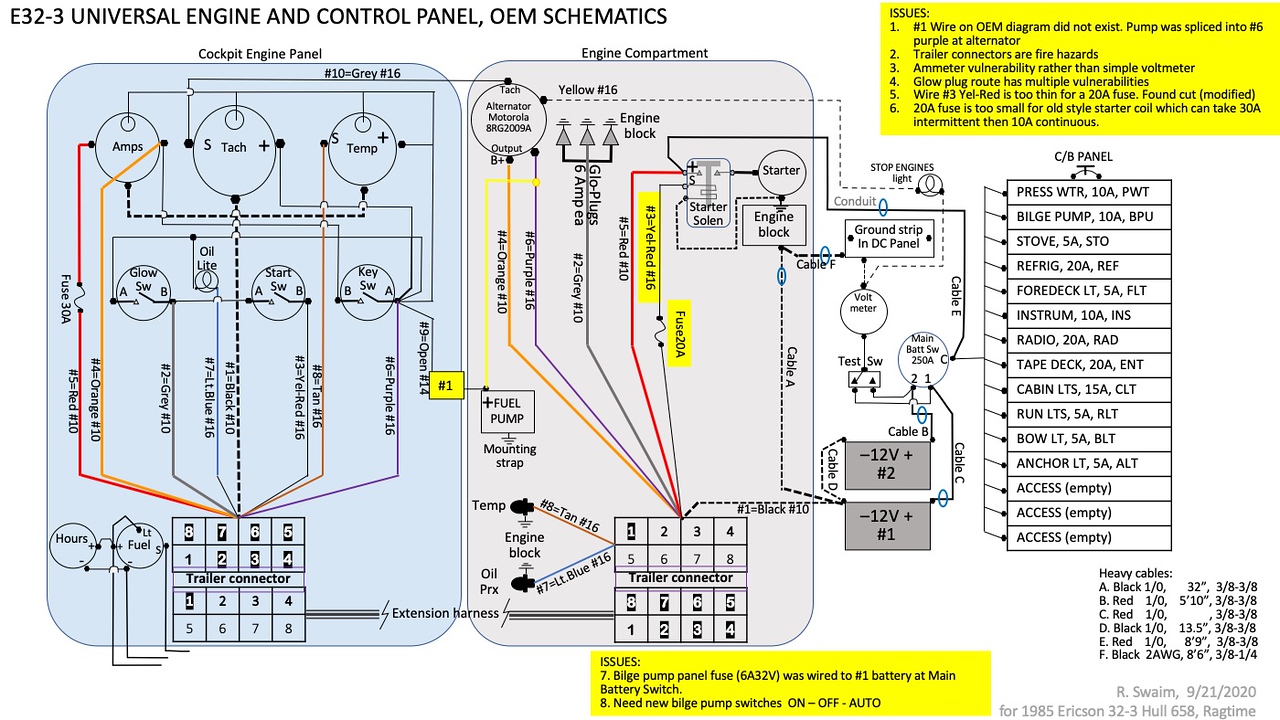 Why bother? Well, twice last year my M25 diesel wouldn't start up again after being turned off. I could jump the solenoid with a screwdriver--if there was someone in the cockpit to hold down the paired glow plug and starter buttons. When it...

Thanks Christian (and Tin Kicker, again). I'll head down tomorrow, printouts in hand and start sorting out my rats nest.

Blogs Author
Another blog on the topic: 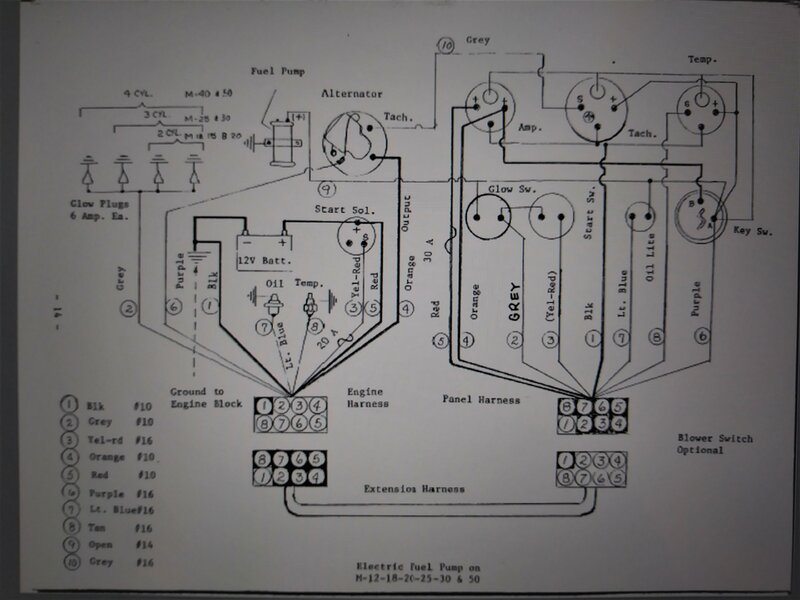