Record-breaking crossing of the Pacific in an Ericson 27?

I read some time ago a article about a Record-breaking crossing of the Pacific in an Ericson 27. I did a google search and This article was all I could find on the web with any mention of it. Does any one else know any more?

This was from Ocean Navigator back in 2002.

Redwood raft to sail from California to Japan

What is it with Northern Europeans and their raft expeditions? Andrew Urbanczyk, a Polish-American with some 100,000 miles of sailing to his credit, most of which is single-handed, has departed on a proposed 12,000-nm, round-Pacific cruise aboard a redwood raft. Urbanczyk's raft is built of seven 40-foot logs and has three sails that total 500 square feet in area.
"Everything is in order, and we are excited about the adventure," Urbanczyk proclaimed a few days before departure from Santa Cruz, Calif., in September. He had recently completed his shakedown voyage from Half Moon Bay to Santa Cruz and was confident that the trip, with three comrades, would proceed smoothly. He plans to sail to Japan, some 6,000 nm from the California coast, with help from the North Equatorial Current and the northeast trades, and then proceed back to the United States via the prevailing northwesterlies and the Japanese current.
The raft is powered only by wind and electrical power, supplied by solar panels. Rain water will be gathered in buckets for drinking and washing. Waste will reportedly be burned in a "garbage crematory," a source of heat that will be used to cook meals.
The 66-year-old Urbanczyk has sailed alone around the world in a 30-foot Ericson, achieved a record-breaking crossing of the Pacific in an Ericson 27, and sailed at the age of 21 across the Baltic Sea in a raft. He has a Ph.D. in world single-handed sailing, 1876-1993. He is in no hurry to complete his latest voyage, he said. "It may take a year; it may take eternity!"
The Raft Transpacific Expedition, based in Montara, Calif., has received sponsorship assistance from Davis Instruments, North Sails and Big Creek Lumber. *

Dr. Andrew Urbanczyk has a few other claims to sailing:

His motto- “STARS MAY FALL, BUT DREAMS NEVER DO”

A letter from Andrew Urbanczyk from Latitude 38 Letters - August 2000

NOT A GREAT SAILING BOAT?!

I never growl. Not even when - it just happened - UPS needed 14 days to deliver my express mail to Europe. I do not boil. Not even if the doors of a restaurant with a big sign reading 'Open', are closed. I do not call a lawyer if somebody, instead of paying me $2,200 as he should, asks me to pay him $4,400. But this time I must object, because I have an obligation to object!

In the July issue of 'Cruising World' magazine, there is an extensive article about small, used boats. On page 52 it evaluates the Ericson 27 by saying, "This isn't a great sailing boat . . ."

I could object on the grounds that in 1980 'Latitude' published an eight-page article titled 'Ericson 27, Class Act,' giving the boat an excellent review.

I could object on the grounds that at the time there were about 100 proud and happy Ericson 27 owners on San Francisco Bay alone. There was even a class association and it had been a one design racing class.

But I will object on that grounds that I singlehanded 'Nord III', an Ericson 27, over 15,000 ocean miles - including a voyage from San Francisco to Japan and back. I made the return voyage non-stop in 49 days, which was listed in the 1980 edition of the 'Guinness Book of World Records'. I later singlehanded 'Nord IV' an Ericson 30+, around the world.

Only Poseidon, the god of all seas, knows how many Ericson 27s are still alive. However, I believe that we - owners and ex-owners - share respect and maybe even admiration for these brave little boats. Brothers-in-sails, three cheers for the Ericson 27, for we know better than 'Cruising World'!

Andrew - The validity of the 'Cruising World' claim boils down to what they mean by a "great sailing boat". If they mean speed around a race course, they've got a point, as the Ericson 27 gets a significant amount of time in most PHRF fleets from similar size and similar era boats built by Cal and Catalina, to name just two. The Ericson seems to have suffered - in terms of pure speed - from an overly rounded bottom, an inefficient keel, and limited sail area.

But if "great sailing" means an ability to carry on in pretty rough weather at a reasonable pace, we think you proved that with your boat. So did Vito Bialla in the first Singlehanded Farallones Race, when he sailed his Ericson 27 over most of the course in 45 knots and more of wind, a race in which a number of boats were dismasted and at least one multihull was flipped. We had a small interest in an Ericson as our first boat, and thought it looked nice, sailed reasonably well, and had quite a bit of interior space.

THIS ANSWERS ALL MY QESTIONS, JEFF

Does anyone have a scanned copy of the article mentioned; 1980 'Latitude' published an eight-page article titled 'Ericson 27, Class Act,'? If so, please post to Specs and Docs.

That article was published in 1980 so it may be hard to find. There is also a good review for purchase from Practical Sailor. They want $20 bucks. I have not purchased it yet, kinda pricey for a review. Here's the front page.

The Practical Sailor review was not entirely a positive one. Much was said about poor performance and selecting a late model boat with wheel steering. They did admit that the boat (E27) was well built. I bought the old Practical Sailor Guide to purchasing a sailboat and the review was in that book. I think the whole book was about $39. a few years ago. No doubt it is much more expensive today.
Gary
S

It's a bit unclear if the Nord IV was an E30 or E30+, as he refers to it as a 30+ in the above quoted article, but elsewhere it's described as a 30. He does mention have Ericson shorten the mast by 6' and filling in the bow with foam, presumably for stiffness? Here is a more complete article:

Nord IV was definitely an Ericson 30+ with the top of the mast cut off so it wound up a short masthead rig. I saw the boat after it was returned to Ericson. My Ericson dealer in Noank, CT sailed it to one of the 80s east coast Ericson Rendezvous on Block Island. In light air, my dealer complained it was very slow. He finished well behind me (E23) in the downwind race to Block, so I'd guess the sail area reduction cost it about 50-60 secs a mile.

Moderator
Blogs Author
What a good story. I have always thought the foam thing is to make the boat "float," or at least make make pumping more manageable after a collision far from help.

Senior Moderator
Blogs Author
Thread Bump, for newer site members with E-27's and E-30+ models.
A pleasant Thanksgiving to you all!

Moderator
Blogs Author
Also, if you want to see what an E27 can do on a short budget and a long plan, visit Christian Lloyd's blog and his remarkable Hawaii video.

sooooo cool to follow Andrew and his adventures ++ RESPECT +++

Wooww!! I didn't know my little baby is a hide bluewater sailboat
I agree with Andrew regarding an important upgrade... a bowsprit and a code zero or gennaker could do all difference and go high on forward.
My boat has the diesel tank in front and sometimes, sailing with a lot of diesel we're going down more than I like it.
I will go ahead with this mod. I do not think the rudder is too forward but I have a wind vane to install.
Thank you for this information!! I really appreciate a lot more my little "tototo"

Blogs Author
Does anybody have more explicit references to Andrew Urbanczyk? The article mentions that he wrote several books, but the internet gives me nothing. Perhaps they were not in English?
P

Christian Williams said:
Also, if you want to see what an E27 can do on a short budget and a long plan, visit Christian Lloyd's blog and his remarkable Hawaii video.

We ran across him in Isla Isabella, MX on our trip.

Loren Beach said:
Thread Bump, for newer site members with E-27's and E-30+ models.
A pleasant Thanksgiving to you all
Click to expand...

Most excellent! Thank You Thank You!!

Christian Williams said:
Also, if you want to see what an E27 can do on a short budget and a long plan, visit Christian Lloyd's blog and his remarkable Hawaii video.

Christian's Lloyd's blog and video are over-flowing with casual mystery and casual mastery. I'm in awe:

"I needed my boat to go straight" ---> "So I attached another rudder to the transom and engineered it into a windvane."

[Reader thinks: Is that stuff all really reliable?]

"Then I sailed my boat from Mexico to Hawaii, to Washington state."

Lloyd (last seen on this site in 2013) is still out shaming the rest of us aspiring sailors, having taken (naturally) an E32-3 (I think, maybe a MkII?): 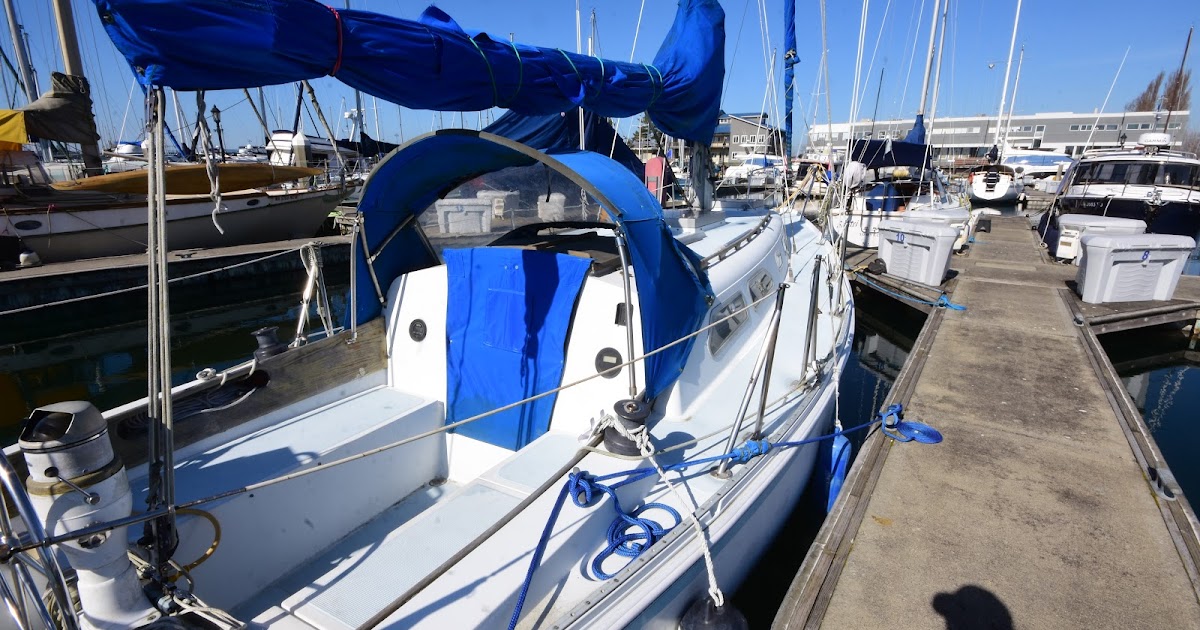 I bought another sailboat!

to Alaska this summer:

Moderator
Blogs Author
Somewhere in his world he tells a story which gets the attention of all of us. Having done all that singlehanded cruising, he was daysailing with a girlfriend here in benign, friendly SoCal, Channel Islands I think, when he ran into a channel marker in broad daylight (ever almost done that?).

The boat was holed beneath the waterline. She flooded fast. I forget just how, but they got assistance and barely made it to a refuge. He felt he had almost lost the boat, on a pretty day, within sight of land. I think it was the E27. Yikes.
You must log in or register to reply here.
Share:
Facebook Twitter Reddit Pinterest Tumblr WhatsApp Email Share Link
Top