Has anyone installed solar panels on an Ericson 30+? If so, where have you mounted them? Photos?

good question, this one is on my mind also. I'm interested in following this link.

Blogs Author
Hi Shannon,
I just installed a 320watt solar panel on Lotus Flower (E27). I used some old hang glider tubing to make up a proof of concept mounting location. Lotus Flower has an electric auxiliary so I wanted a way to charge batteries while away from the slip. I do have a Honda 2000i but I wanted something less fumey. Time will tell how well it works...
Here are some photos in the flat and angled positions.

I decided to add solar to my 30+ in the during the 2017 season in preparation for some extended cruises. I already had a bimini and decided to mount the panels on top. I bought a solar kit with two 100-watt panels and a very basic charge controller for about $300. I really struggled figuring out how to mount the panels. I spent quite a few fruitless weekends at the boat holding the panels on the bimini without making any progress. I had no success until I brought the bimini frame home during the 2018-19 winter and mounted the frame on an old banquet table so I would not have to work on it over my head. The first decision I made was to build an aluminum frame out of 1" aluminum angles that I could mount to the bimini and then mount the panels to the frame. After coming to this realization, things got a lot easier. Of course, I had to be concerned about how the frame would go around the backstay - and that it would stay clear of the main halyard when attached to the end of the boom. I used six of these connectors on the bimini to attach the frame. And I bolted the panels to the frame with stainless hex bolts with vinyl washers to reduce galvanic contact. The canvas on my bimini was quite old and instead of modifying it, I sewed a new one. I’m sorry I don’t have a better picture of the canvas. It came out really nice with a slick window in front of the forestay to be able to see the masthead.

Mounting the panels in the spring has very specific steps. 1. Mount the bimini arches 2. Zip the fore edge of the canvas to the frame 3. Install the aluminum frame (disconnecting one corner to get it around the backstay 4. Screw the panels to the frame 5. Zip the aft edges of the canvas.
Here’s the install in my living room. 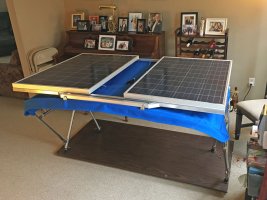 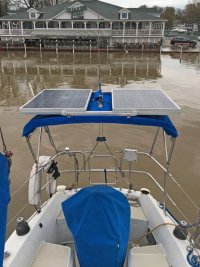 Routing through the dorade is not optimal but I wanted to try it this way before making holes in fiberglass. Now that it's installed, I don't find it objectionable.
In this picture you can see the sides of the aluminum frame which has vertical members which were critical for the frame stability. 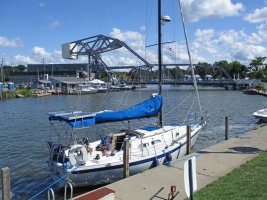 I found it important to have an isolator switch so I could disconnect the panels when connected to shore power.
And, the cheap charge controller has already failed and I’ve bought this one that I intend to install next week.

Naturally, I was concerned about windage and how strong this system would be in high winds. Last August, I was on board in 55 knots and 8 footers and it worked perfectly.
Last edited: May 22, 2020

Excellent reuse. All I have is wind chimes made from busted downtubes.

Blogs Author
>All I have is wind chimes made from busted downtubes.

Hi Mark & Jim, nice installs. I think you covered everything. Now to try to duplicate. I may send you questions as this is my next project.

Also depends on how much solar you want and the purpose?

For just keeping the two 100 Ah batteries charged to leave on the bilge pumps and solar fans, I have a 50W panel in front of the companionway slider.

Till this, the battery drain for the solar fans alone has been doing fine with just a little 1.5W car window cigarette lighter panel.

Not on the boat at this point, but I do have two 175W panels that will probably go on the sides of the rear pulpit like what is shown below, so they can tilt up when at anchor. For my 32' boat they'd be a lot of weight and wind surface to mount on top of a bimini. 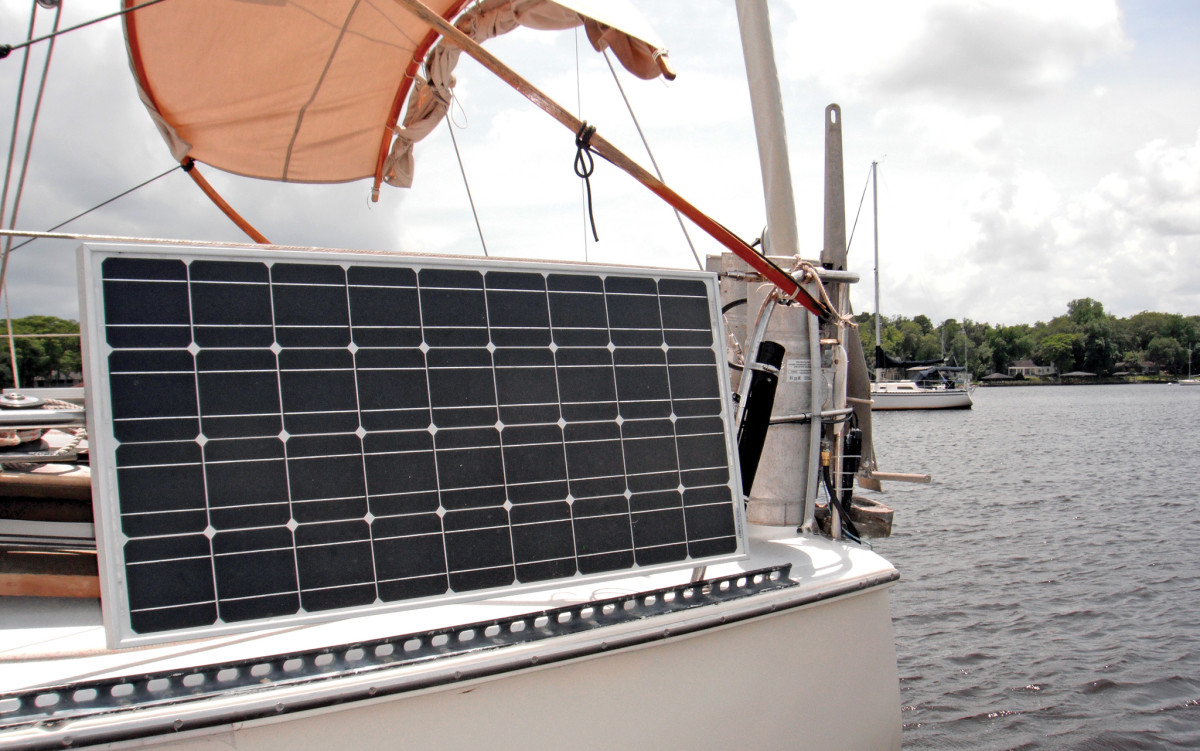 When my husband, Dave, and I bought a 29ft sharpie as a summer home, we outfitted her with much of the old gear from our 34ft Creekmore, Eurisko, including

Finally got a photo of my 50W panel and it looks like you could put yours in the same spot. There's plenty of room around to not need to step on it. Wires were not yet wrapped and nicely stowed in the photo.