I’m curious if anyone knows whether the internal fiberglass headliner in the 35-2 was structural in any way.

From what I can see, it doesn’t appear so. But no harm is asking.

Blogs Author
I don't remember which boat was under discussion, but IIRC, Mr. King once replied "Yes, the liner is structural!" But did not elaborate. On the E29, it appears to me that the lower liner parts (settees, etc.) obviously act as stringers, where they're attached, but can't see what the headliner does. I've considered bonding it to the cabin-top with foam. For insulation and rigidity.

BTW, there is an E35 languishing on Craigslist that appears to have had the headliner cut out and not replaced with anything. I suspect they'll have a hard time selling it unless they do something about that, or drop the price drastically.
P

Copy that, I guess I’ll keep an eye out for flex. I have cut out the headliner from the bow to the mast. The cabin is tomorrow’s task

I have been wondering the same thing about my 35-2 and as I am about to replace the Stbd bulkhead why aren't the bulkheads attached to the bottom of the decks?
G

some 35-2's were built with vinyl overheads which are hardly structural and I can't imagine there were structural differences in the hull when they installed the fiberglass headliners.
The bulkheads are often not tabbed to the underside of the decks to allow for the flexing of the boat in a seaway. But then some are... so who knows what is best.

Senior Moderator
Blogs Author
Note that construction technology did change (and evolve) thru the boom years of the mid to late 70's. While the FRP overhead "pans" conferred several production benefits, it also had some limits. Our previous Niagara 26 had this interior pan, and some movement around the main bulkhead was just considered acceptable.

In most (all?) of these designs, the slot where major bulkheads was fitted in did contribute to overall strength. Even tho in later years the builders would keep upgrading to an adhesive that helped to 'lock' the bulkhead in place, there were limitations to how much strength they could guarantee.
By the later years of the long model run for the E-35-2, EY changed over to a stick-built interior, even going to teak in the '78 and '79 builds. I really do not know when this change started, so perhaps a former employee can chime in. They may have changed the layup schedule for part of the deck, as well.

Given that by the 80's, EY was tabbing in bulkheads and other furniture, they knew the value of making the whole boat a monocoque structure. A lot of other high-end builders were doing this as well. Our Olson was built this way, I should note.
If removing a part of the original liner, one would want to do at least some structure analysis on a napkin, just to be sure of enough residual rigidity. That's only IMHO, of course.

For refinishing, we have removed all of the teak trims around the tops of bulkheads. Every length of trim covers the stapled edge of the vinyl, and tabbing of the wood to the deck or overhead. They even routed off a band of surface veneer so that the tabbing would not be too proud of the visible surface beyond the trim.
P

So, we cut the thing away, cleaned, sanded, cleaned, pulled away plastic, added some insulation, and have finally moved back aboard. 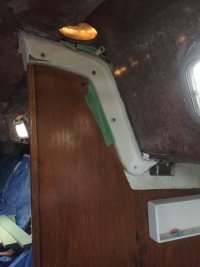 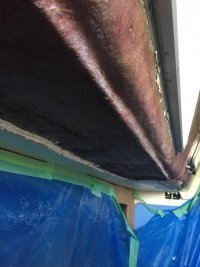 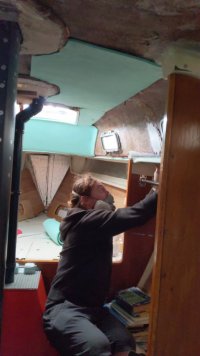 Blogs Author
Hi Pajo,
What are you going to put over the insulation? Did you find the fiberglass above the liner to be thin or pretty substantial?
P

I’m not 100% sure about the cabin-top layup, the bottom layer is chopped strand which is a mess if you don’t cover it. There were two spots where I got a little too agressive with the grinder and I went through some of the chopped strand, maybe 1/16 of an inch or so. Didn’t get through to the wood though, so it’s at least 1/16” thick.

I have contact cemented yoga mat material and a bit of closed cell packing foam someone gave us.

Over the top I plan to cover thin ply or foam with some sort of vinyl that I can screw in place.
G

and just a caveat with the overhead and insulation etc... you want to try to avoid any enclosed air gaps. These will trap moisture and create mould growth.

I have seen a *lot* of the underside of our decks in the last month as I have accessed different parts of the deck to epoxy-pot the holes for eventual reinstall of hardware. The layer of glass is indeed thin. considering that, unlike the top, it does not have to resist impacts and point loads. It's there to provide the bottom side of the "I-beam" coring, structurally speaking. After well over 100 holes, I find myself humming the Beatles tune about "how many holes it takes to fill the Albert Hall..."
One positive note is that the balsa is well adhered, both sides. That's good considering that none of our boats (AFAIK) were vacuum bagged.

yes... even when SOAKED, the balsa clings like grim death to both sides. What a bear to get the top layer off. I ended up cutting 1" squares into the top layer and bashing then sideways... leaving lots of holes to fix ; |
Steep learning curve, would do it differently next time! (as in hopefully never)

Blogs Author
Hey Pajo, are you following Sailing Alma. They have an E41. Here is a link to their latest video on the cabin ceiling redo.

Interesting, I fixed a few places with rotten deck core is Tahiti, top layer came up very easily, no strong adhesion, but then again, I was changing it because the wood was toast.

There is a fellow here named Ed who has worked on so many boats he knows the Ericson layup and has given me some great advice.

Interestingly, the side decks were glued to the headliner with some type of thickedned resin. When I cut the headliner away, I left the resin. It’s like a rock, and you can’t really chisel it. It was poured along the hull/deck seam and fills the void between the headliner and the deck. So, it’s not just a couple layers of glass on the underside, there is heaps of that stuff too. And it’s great backing plate material.

It was also poured around the mast and just behind the forward hatch. There are also two spots between the companionway hatch and the main salon hatch.

Who really knows. I’m going to watch that video and see if I get any ideas.

I noticed the cabin-sides where the portlights are had quite a bit of flex, and after this last rainstorm nearly every one was leaking. I stiffened the bottom of the cabin-side by glassing 2” strips of the old headliner under the deck to make backing plates for my genoa tracks. I may glass a handrail in above the windows to help stiffen the cabinsides and hopefully prevent any future flexing or leaks.
G

a couple of pics from my (still ongoing) deck project. The long piece at the front came up fairly easily because the core was mush. Farther back the core was wet but not rotten... almost impossible to get it up. Did a lot of damage to the substrate which I then had to plate and fix underneath. Horrible job.
The lesson learned (one of the many) was to cut out only the 'red' areas (ie. moisture meter) and leave the yellow areas. If you can cut out the red areas and leave open for a couple of weeks, especially in hot weather, it will dry out well enough to cover back in. It will retain structural integrity.

I was given a tip today about PVC kitchen sheeting as the new headliner. Has anyone had any experience? Supposedly it’s about 3-4mm thick, flexible, yet stiff enough to hold shape, easy to cut, and easy to clean.

Another update, the yoga mat material is impervious to tape. I ran new wires for the cabin lights and decided to tape them in place above the future headliner, doesn’t last a day.

The spray on contact cement between the foam and fiberglass has mostly worked. I found some extra strength spray that works great and have had to go back and re-stick some it again and it since hasn’t been an issue.

Tomorrow I’ll be pulling the windows out and apart.
G

"I was given a tip today about PVC kitchen sheeting as the new headliner. Has anyone had any experience? Supposedly it’s about 3-4mm thick, flexible, yet stiff enough to hold shape, easy to cut, and easy to clean"
All of the above... it is likely the pebbled glass reinforced polyester resin sheets used for tub surrounds. A bit industrial looking but good stuff, easy to work with and clean. Connector strips also available as well as corners etc.