JMR said:
the hulls of the 34-2 were essentially two halves joined together, while the PS built 34-200s were made from a solid, single piece of fiberglass.
Click to expand...

I'm 99% sure that the E34-2 hull was laid up in one piece. I suspect SuperSailor can confirm.

And I'd be 100% surprised if PSC made any changes to the tooling. After all, most of the value they got out of the deal was the Ericson molds.

(some of the older models - eg, the 39 - *were* laid up in two pieces and bonded together along the centerline, because the tumblehome in the shape made it impossible to lift a finished one-piece hull from the mold.)

Thank-you for your response. I'm a big fan of your videos. In fact, you're a big part of why I came to like these boats. Appreciate the info.

The biggest difference in these boats over the years was the layout belowdecks. Since both of your boats have the head aft (which means lightly larger quarterberth, slightly smaller V-berth), any other differences are minor and probably matters of taste.

Overall condition and existing usable gear (autopilot, instruments, windlass, sail inventory and so on ) will be tipping points.
Click to expand...

Thank-you. I'm beginning to think some of the folks I've spoken to have their facts wrong.


supersailor said:
My hull is one piece.
Click to expand...

Thank-you. This makes more sense than what I've heard.


bgary said:
I'm 99% sure that the E34-2 hull was laid up in one piece. I suspect SuperSailor can confirm.

And I'd be 100% surprised if PSC made any changes to the tooling. After all, most of the value they got out of the deal was the Ericson molds.

(some of the older models - eg, the 39 - *were* laid up in two pieces and bonded together along the centerline, because the tumblehome in the shape made it impossible to lift a finished one-piece hull from the mold.)

Blogs Author
On a related note--here's a deck core from a 32-3. I cut this out to replace a deck fill-plate. 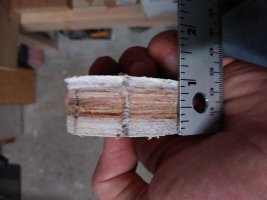 Fortunately, I haven't had the need to drill through the hull yet....
S

The snow finally ended and my internet connection finally speeded up again so here is a shot of the hull core ahead of the keel. I can see why Terra Nova survived bashing that rock in Canada. 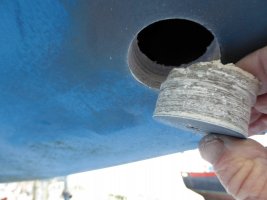 GrandpaSteve said:
I've learned that on my 1987 E32-III the thin blue cove stripe and white mast and boom are unusual. Is there any story behind that, or was it a customer option?
Click to expand...

My 36RH has custom triple stripes from the factory which I have not seen on another Ericson. The raised cove area is still molded into the hull even though the stripes don't relate to that area and this is a Holland design. It's hard to see except with the right sun angle, see the stbd side in the middle picture. FWIW, my mast is black and my boat was sold on the west coast.

The Ericson dealer in Rhode Island ordered a lot of their demo/stock boats with the double stripes and my dealer in Noank, CT ordered most with the solid cove but some with the thin cove stripe outline.

Trying to figure out what is in between the lead and the cabin sole. Is it just empty space? 35 mk2. Hull #201.
Is it possible that this void could fill with water?
Many thanks.
L

Hello folks. Im interested in hearing pros and cons about the location of the engine in this model. One layout has the engine under the companionway steps as per most boats and the other has it in the galley under the sink and over the keel. Any thoughts other than difficulty of reaching all the keel bolts without lifting the engine? Thank you.


Lanealoha said:
Hello folks. Im interested in hearing pros and cons about the location of the engine in this model. One layout has the engine under the companionway steps as per most boats and the other has it in the galley under the sink and over the keel. Any thoughts other than difficulty of reaching all the keel bolts without lifting the engine? Thank you.
Click to expand...

I seem to recall that the mid-engine scheme was done in '86 and '87. Puts the weight in an advantageous place in the boat, and the galley counter was extended aft to provide room. Access is really easy for routine maintenance, too. Hopefully an owner can chime in with advice on reaching that single aft-most keel bolt.
Last edited: Jan 11, 2020
L

Thank you. I have another question regarding the keel designs. I lost out on the one I had a previous question about engine placement. Quite upset over that one actually. I believe it was 'the' boat for us. Anyways.... Could be a good thing I suppose. But this question is regarding sailing characteristics of the 2 different type of keel designs, 1) is shown as a 'competition keel' and the other 2) a standard keel. Looking at the schematics on sailboat data. com it appears the 'competition' one is deeper but cut away on the aft portion, where the 'standard' is shallower but fuller in shape.

Tell me something about the differences, sailing/ handling characteristics and if its anything to be concerned with. Thank you.
L

I own a E380, which is the Pacific Seacraft version of the 38-200. My engine is under the companionway stairs. Access is very good.
My boat was re-powered in 2012 with a Yanmar 3JH5E. As to sailing characteristics, I only have experience with the fin keel. And our boat is not as per factory, as the second owner had the keel modified. My boat was a wing keel version. The owner had the wing cut off and a new piece of lead bolted to the bottom. Draft is exactly 6'-0". I was told that this was done by an expert yard after conferring with a designer. I do know that the boat sails superb. This boat cuts through chop, no slamming and it will point like you would not believe. This was our fifth boat and is the best sailing of any boat I have owned. 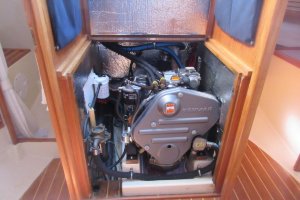 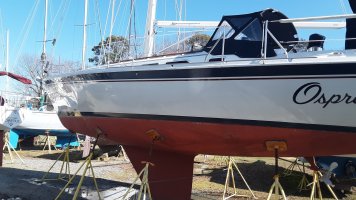 I am surprised that when it comes to the designs of the old Ericsons that no one has mentioned the Racing Ratings of the era...
The 1/4 ton, 1/2 tone and 1 ton classes gave way to
MORC and IOR

My 1971 Ericson 29 was designed to make max use of the MORC rules. For example... The Bow overhang and the Stern over hang give the Boat only a 22 foot waterline when standing upright... At about 15 degrees of heel... the waterline grown about 2 feet longer.

She was built for the ratings....

Also IOR rules gave you a bad rating for a big main sail... so booms became shorter and mast got taller and mainsais became smaller, and gennys became bigger.. Back in the day we raced with a 160 Genny, a 130, and a 110. Sterns became pinched, the the middles ballooned out to increase the waterlines when heeled over.

Thats what I remember from off the top of my head.
L

All I know is I have beat boats that have a much longer water line than my specification. Osprey really goes once she's down in the water.

Senior Moderator
Blogs Author
'competition keel' and the other 2) a standard keel.

As I understand it, what we call the 5' shoal-draft keel was originally the "standard" Ericson keel, a departure from the usual marketing.

No doubt the deep keel points a little better and runs aground a little better. Apparently (brochures talking), the ballast is close if not the same. The shallow keel is thicker, with a different NACA section. I like my deep keel 38 here. I would much prefer the 5' "original standard" keel on Chesapeake Bay.
L

My keel is modified from original. The previous owner had the wings removed and a small tip bolted to the bottom of the keel. Draft is 6'-0". I am not having any problems in the Bay. Plus, running into our muddy bottom with a fin keel is most often a non issue. I usually am able to back out or plow through.

For many 70s and some 80s Ericsons 12deg was (if I remember) considered optimal heel. More than that creates too much helm which has to be offset with the rudder which creates drag that negates the improvement of the waterline.

In the mid 70s I raced an E37 rigged for 3/4 ton (though I believe it was not designed specifically for ton racing).
Was wild.

Anyway on Indigo I can out perform many modern boats because their optimal heel and pointing angle are very sensitive. They are often sailed well below top performance. In contrast, I can sail pretty sloppy and still be close to best speed to weather.
M

steven said:
In the mid 70s I raced an E37 rigged for 3/4 ton (though I believe it was not designed specifically for ton racing).
Was wild.
Click to expand...

Actually the 37 was designed specifically for 1 ton racing. My dad bought hull #1, and campaigned it heavily. I still remember the
day he came home talking about popping the hull out of the mold-the gelcoat was bright yellow?! Hey, it was the 70's!
Artwork was by the late Vince Bartelone. Those were good times. 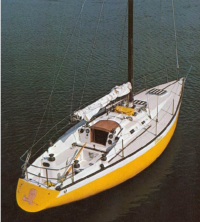 Senior Moderator
Blogs Author
That E-37 was/is a gorgeous design. Reading Steve's comment about sailing his boat also reinforces why we love our Olson -- it's not only fast, but has a "wide groove" and is very easy to sail it to 97% of its potential. Even a duffer like me can make it look pretty good.
There are other high performance boats around here with masses of tracks and tackles to position a jib in bazillions of positions and while the crews have fun tinkering with them, they are only fast when every setting is perfect for a narrow wind window at a given moment. (Exaggerating... yeah, a bit. But not too much.)
You must log in or register to reply here.
Share:
Facebook Twitter Reddit Pinterest Tumblr WhatsApp Email Share Link
Top