kiwisailor said:
That's how I have my genoa sheet setup. One long sheet, less snagging when tacking.
Click to expand...

I watched the video and it does produce an elegant knot in a "seamanship" mode, nice, but as tied it still leaves a dangling lump of a knot which extends from the clew. As Loren has pointed out, the goal is to eliminate a knot which extends and will catch on lifelines, mast hardware, kayaks, upturned dinghies, or assorted grandchildren scattered about on the foredeck, during a tack or a gybe.* The simplicity of the Lark's head/Cow hitch/Luggage Tag knot is the one which eliminates that hanging knot, I think. I am not terribly worried about the compression of the grommet at the clew as I think the main force, by far, is pulling on it, same as with a bowline, etc.

*Lest you think I send my grandchildren to the foredeck during a tack or gybe, I do not. But trying to keep them from scampering about is another story. We settled on a compromise. We will all clip on to the jackline, no matter how benign the conditions are. For those kids though, I just have simple tethers made from a piece of line tied (bowline) to their PFD (vest style with crotch strap) and a hardware store spring clip. It is NOT coastguard approved but it brings great peace of mind nonetheless.

Now he's 30, and I find I;m not quite so cavalier with five-year-old grandchildren. But the "one hand" kid (and adult) rule still gets to the heart of it. 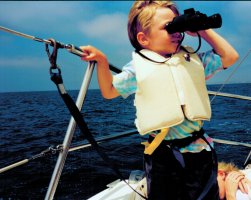 I am about ready to order new rope for the sheets, so back to the original question - did anyone find some rope they liked ? Some of the new double-braided low-stretch ropes look good but seem a little unfriendly to the grip. Also want something that is going to resist kinks/tangles.....

K2MSmith said:
I am about ready to order new rope for the sheets, so back to the original question - did anyone find some rope they liked ? Some of the new double-braided low-stretch ropes look good but seem a little unfriendly to the grip. Also want something that is going to resist kinks/tangles.....
Click to expand...

I like this Samson line which is bit of a compromise. Low stretch but not the most expensive. Very good "hand," IMHO. Excellent line.

MLX3 is a lightweight, core-dependent line that has excellent strength and moderate stretch.

For jib sheets I use NE Sta-set. Really nice on the hands, good price point, & not sure high $ ultra low stretch line is that important for this application is it ?

Dave G. said:
For jib sheets I use NE Sta-set. Really nice on the hands, good price point, & not sure high $ ultra low stretch line is that important for this application is it ?
Click to expand...

Without knowing much about rope, I used New England ropes sta-set for my traveler lines and reef lines ( have only owned a boat for 11 mo. There is an abundant supply of it at west marine and it’s not too expensive. If you look at their website, it seems they recommend it for almost any “performance cruising” application. I’m not certain it was best choice for reef line but it seems to work well so far . I was just checking to see if I should use something else for sheets in a racer/cruiser type boat .

Personally, I find Sta-Set to be stiff to the hand and not so easy to tie. The regular StaSet is pretty stretchy (2-4% stretch , I think). Not so good for sheets and halyards which you want to be able to keep taut when close hauled. StaSet X is better (maybe 1-2%), but, as I said stiff.

Personal preferences come into play. For me, the Samson lines are worth ordering. West Marine has some of them listed and in store but they seem keen to sell New England Ropes.

As we sometimes say, "whatever blows your hair back!"
G

While I have used the Larks head for years. My current boat came with eye splices and soft shackles! Nice for quick changes of jibs.

Senior Moderator
Blogs Author
Allow me to add, regarding mainsheet only, that I continue amazed by my new 7/8th single braid (Regatta braid). What a pleasure in the hand and kink free. But I think it would have a tough time as a jib sheet in surviving the roughhouse of the stays.

I thought I would add another data point since I recalled this topic. the sailmaker (north) came today to take measurements for the main. The guy who runs the north Sausalito is super knowledgable guy. Since he replaced my jib a few months ago and I was interested in new sheets, I had asked him about the Larks head knot (luggage tag) vs the “old school” bowlines. He’s take on it is it is personal preference but he said that the luggage tag knot can be “really hard “ to remove once it’s on there for a while and gets tight , so if you want to change sails often, he would do the regular bowlines (Which is what I am going to do).
You must log in or register to reply here.
Share:
Facebook Twitter Reddit Pinterest Tumblr WhatsApp Email Share Link
Top