I've had the rust stain streaks down the keel from the rear near the rear keel bolt. and pics I've seen show the rear bolt corroding. why the rear bolt; why not the front bolt; or ones in the middle? what is it that causes the rear bolt to fade the fastest? nuts washers and upper portions of the bolts sit in water (both sea and rainwater) nearly all the time; there is water coming in from the stuffing box, the mast and leakage forward of the v berth, maybe the bowrail fittings; there is an inch or 2 in the bilge all the time; but i don't see the nuts rusting. what is going on with this?

a year and a half ago, i mounted a float switch in the bilge; epoxied a piece of plywood and put 2 bronze screws in to hold the switch; it sat in water most the time; a month ago i pulled it out; 1 bronze screw was essentially dissolved; the other was fine. I've noticed too that bronze thru hulls/ seacocks have grounding screws on them to prevent galvanic corrosion. I suspect there is a fair amount of electrical activity in the bilge water... and that is what is attacking the rear keel bolt; I suspect that when the rear bolt is gone, it will attack the next closest bolt. I'm going to install a zinc anode in the bilge and watch it to see how much it dissolves; if indeed it does corrode, at least it will be the annode and not (presumeably) the keel bolt.

Here's a thread on another forum, another boat, but... a familiar problem with their keel-to-hull joint. Lot of metal loss when discovered.
See reply #6, for photos.
https://forums.sailboatowners.com/index.php?threads/weeping-keel-joint.179338/#post-1367141

ps: it's been well over a decade - or 2 - since our keel was re-bedded, and we still have only occas. rain water in it from inside the mast in the winters.
Dusty dry otherwise.
Last edited: Apr 18, 2017
B

We have our new-to-us 1984 Ericson 35 in the yard, doing a multitude of repairs and rejuvenation treatments. This morning we dropped the keel, due to a very strong suspicion that a little bit of water was getting in through the keel-hull joint, and that my wife had heard too many horror stories about keels falling off boats, and then bad things happening to the people on the boats.

Anyway, it came off pretty easily, and this is what we saw: of the 12 bolts, about 6 looked as good as new, another 3 had a little corrosion, but not enough that I'm going to loose any sleep over it, and another three were really ugly. There were large notches missing from the bolts. The corrosion corresponded to roughly where the washers under the bolts were - so the bottom couple inches of the bolts were good, and the top couple were good, but it was just bad in the middle. The aft most bolt had less than 1/2 of its metal remaining.

I believe that the bolts are a "J" shape cast in the keel, so that they probably cannot easily be pulled out. The yard is suggesting that we "sleave" the suspect bolts... basically cutting a larger hole in the hull, and screwing in something over the suspect bolts that will substantially connect the good upper and lower parts of the bolts. They say it will look odd, but that it should work. Another option is to add a few keel bolts... for some reason I think the yard would rather not go this route. Does anyone have a thoughts or preferences on this?

When it is all said and done, we will epoxy the hull and keel together (they will hang the boat in the travelift as the epoxy sets).

Also, according to the Ericson specs, all the bolts are supposed to be 1" or 3/4", but the aftmost bolt is definitely smaller (the one under the dustbin on the 35). Are other peoples like that? It wobbles in the keel, making me think there was a goof in the casting.

Incidentally, the E35 and E38 have the same keel, just the 38's goes a little deeper.

As I predictably say about now in these discussions, no keel has ever fallen off any Ericson sailboat.

Blogs Author
And when people say things like that, I always think, "... But no Ericson (or Valiant, or whatever) has ever been this old before."

Just one of the things that make me want to stick with my little boat with the encapsulated keel.

Which part seems strange? We still have the boat (has it really been 11 years?), with keel firmly attached.

And so I join the ranks of the keel-obsessed via the self-inflicted wound of running aground. When I bought Aylwin two years ago, she had the “smile” and a story about an embarrassing grounding to go with it. At the suggestion of the survey, I gouged out the crack all the way around, and filled it with 610 before tightening the bolts. More came down the mast than up through the bottom so I generally felt like I was winning (both being fresh water).

Cut to about a month ago when I found myself foolishly playing mortar and pestle with my keel off Shelburne Point. Initially thinking I’d dodged a bullet with a relatively dry main bilge, I eventually uncovered a very rapidly filling shower sump. Aggressive bolt tightening slowed it down to something my (weak sauce) rule pumps can handle, but nightmares persist.

Insurance company sent an auto inspector with a camera and this is what he saw: 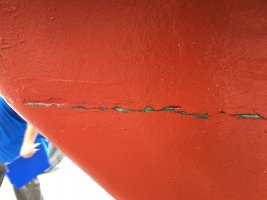 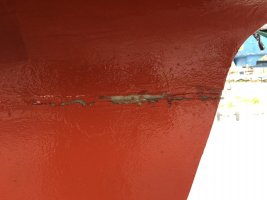 It’s like my 610 squeezed out like tiddlywinks. The anonymous adjusters came to the conclusion that this is about $3k worth of damage without any itemization, but said that if the yard had a different estimate they would re-open the claim. The yard’s initial estimate was more like $14k. Including some exciting mast-dropping and keel pulling. I’ve had friends run aground and patch it up themselves and go on to lead happy lives, but maybe I’m answering my own question by professing my anxiety. I know it’s not going to fall off. I could try the 610cure again and see how I’m doing in the spring, or....?

Keel when I bought her: 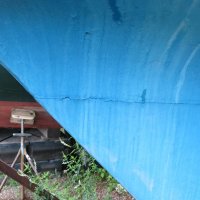 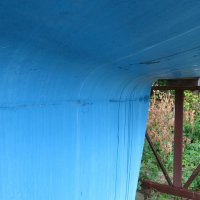 Your crack along the bow section looks a lot like mine did after I hit a big log going 6 knots. I hauled the boat, and the yard experts put pressure on the keel and only a few drops of water came out, but they said that was enough that the keel should be dropped and rebedded. They agreed that it could be temporarily fixed with grinding and epoxy, but that it would reopen with pressure on the keel from heeling. I opted to have the keel dropped (it had never been done to my knowledge on this boat). I found that the caulking was quite minimal, and the keel dropped easily with no fibreglass damage. The yard staff said they had never seen one drop so readily. The bolts looked quite good with very minimal corrosion. They gave me the choice of rebedding with 5200 or epoxy. I chose epoxy, as I can't imagine dropping the keel again on a 34 year old boat, and I preferred knowing that the keel/hull joint would be very solid.

Although it was expensive, I think it was worth it, and I would do it again, if only for the peace of mind of knowing that it won't leak, the keel will never fall off, and the keel bolts are solid.

Let us know what you decide.

Just had a conversation today with a friend now getting his large sailboat repaired in the yard after whacking some basalt this summer while cruising.
(Not an Ericson, but the problem and solution(s) are similar.)
F

I was moping up some water in my bilge with my wet/dry vac and decided to clean under an inspection plate for the aft keel bolt. The water was from rebuilding my head pump (yuck). I can see the bolt clearly but the nut looks like a blob of rust. It does not look like the nut could have been tightened all the way down by the way the hull is designed there. I am thinking about grinding off what is left of the nut, cleaning/treating the threads, and installing a new nut. I was also thinking about building up the contact point where the nut and washer will rest with epoxy. Does anyone know what size the nut is for the aft bolt. My boat is a 1984. Comments and advice please. Thanks
S

Would anyone with experience be willing to offer any advice for someone (me) looking at an 80's Ericson 35-3? I am knowledgeable about keel design, keel bolts and the corrosion issues that can occur - and this thread is a good read. Besides the presence of a crack or smile at the keel joint at haul out, can anyone offer any advice (model specific if possible) on what problems can be detected from the bilge, if the boat is in the water?

Moderator
Blogs Author
Well, there shouldn't be any sea water in the bilge that isn't accounted for by deck leaks, stuffing box or rudder tube issues, or the usual rainwater from the mast. Only then should keel bolt leaks enter the puzzle.

You can examine the keel bolt washers and nuts after cleaning them up with glop remover. Some pitting is likely. They shouldn't leak, and it;s unlikely they do. Some rust is likely evident if they haven't been tended too, but it should scrub away with household "rust remover."

A crack or smile is probably just caulk to be filled, and most surveyors will shrug unless they see a hidden story there.

No Ericson has ever lost it's keel by design or fastening failure, and few keel drops reveal imminent threat.. Dropping and resealing the keel are considered prudent maintenance by some members, given how old our boats are. Others prefer watchful waiting. Or not even worrying about it without evidence of a problem.
Last edited: May 30, 2020

ssasailor; I'll update this thread from 2009; where I had rusty water running down the keel after haul out. Since then, I apply new 3M 5200 every couple of years to the hull keel joint. After digging out the black mastic PO put on the rear keel bolt/nut, I replaced it with 5200 and torqued it; it has held. Also I put an anode on a keel bolt back then; the anode disintegrated over 11 years (essentially bonded the keel bolts). I just checked the nut's torque: no movement at all. Never have had any rust on the keel in 11 years since. I'm sure this hull could stand rebedding since it's 33 years old. But I'm thinking it's in very decent condition and I would hate to think this would have been a show stopper when I bought it. Fair winds.
You must log in or register to reply here.
Share:
Facebook Twitter Reddit Pinterest Tumblr WhatsApp Email Share Link
Top