What fools are we to try to force rectangular furniture into our round boats? More properly, these things should be some sort of honeycomb structure, growing organically from the hull while lending it strength. Or perhaps Nautilus chambers. *sigh* but instead, I've gone where everyone has gone before...

A second problem to solve was that "The E29 has insufficient storage space for a cruising boat," says, everyone who has ever reviewed it. Furthermore, pretty much all the storage that it has is on the port side, so if you put stuff in it, the boat develops a list. Here is the starboard side of the "salon," as it came to me: 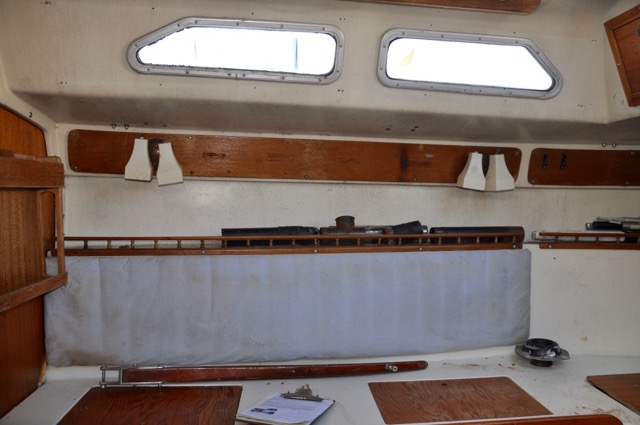 There is a little shelf there, above the settee. (On a larger boat, it would be a "pilot berth". Do you know a pilot who is 8 inches wide? Oh, yeah, the ST2000+... It could work...) A ridiculous wobbly little pin rail totally fails to prevent any object set up there from launching across the cabin on the first tack on "sporty" days. 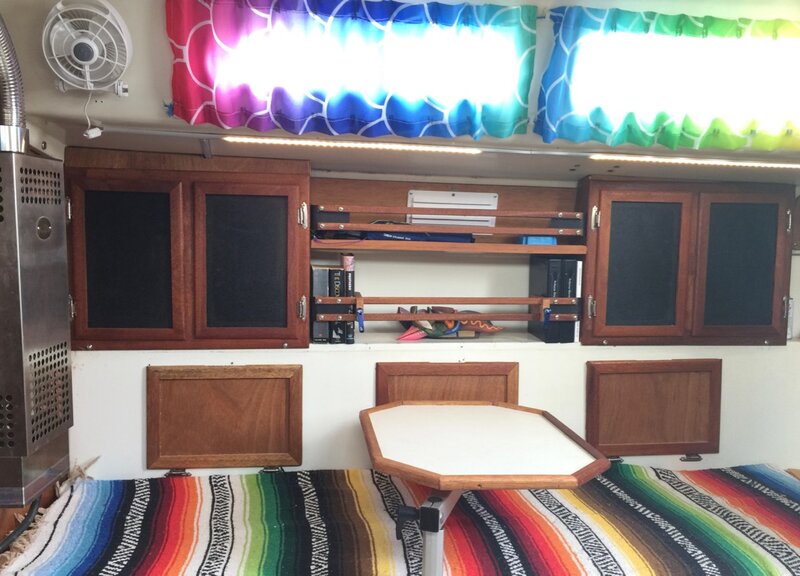 A previous post described cutting into the settee-back to access the hidden spaces back there. Other posts described the table and curtains. Earlier this year, I made two cabinets and a bookshelf to fit above the ledge. I have seen photos of an E29 or two with solid cabinets all the way across, and it looked a little oppressive. (It also looked like they tried to force Home Depot stuff to fit...) Mixing in some open shelving seemed more attractive to me. Besides, I need a place to keep books and casual items.

These are much the same style as the galley extension. Mahogany face-frames with mahogany and ABS doors. I like the look of the ABS, but I also had some thought that those black panels might serve as places to mount photos or small pieces of art. These doors all have finger pockets and magnetic catches, but I think I'll now retrofit them with the same Seadog latches as the galley extension, how that I've worked that out. They haven't popped open under way, but then again, there's usually nothing in them as of yet.
I don't know if it's the right way, but the way I do cabinets is to mark "stations" where the sides of the cabinet will be, then trace the shape of the hull (or liner) behind that onto a piece of cardboard. Then fiddle with the cardboard mock-panel until if fits. Then I transfer the cardboard outline onto plywood, cut it out, and mate it with the face-frames. It all looks a little odd for a while. If I have sufficiently appeased the spirits, it all fits in the intended space without too many trips back to the shop to trim this and file that. 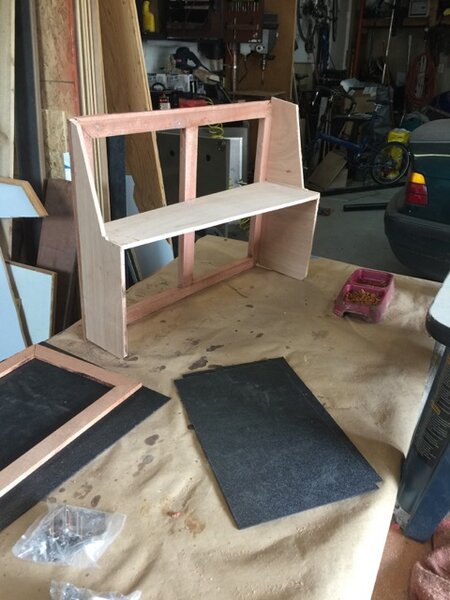 Next, I needed something to retain books and other items on the open shelves. (The upper shelf is another piece cut from my first table - seen in the "table" post.) It seems trivial, but I considered or tried several things: A simple batten, paracord-weave cargo nets, a drop-bar that would fit into external brackets. For now, I've settled on a batten system that borrows a bit of style from the galley extension spice racks. ABS L-shaped brackets screwed to a pair of battens. I wanted the L-brackets at the sides, so that the depth could be adjusted, in case some needful things (books) have to overhang the ledge by an inch or two. The dual battens also allowed me to make quick-release adjustable "book ends" from some scraps of wood and a pair of extra bicycle hub skewers. 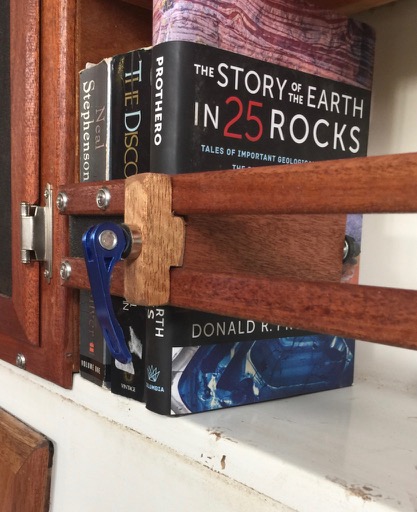 This seems to do a pretty good job of keeping things on the shelf when the boat falls off the back of a (modest) wave. I had thought that the retainer might be screwed to a conventional Lexan book-end for more stability, but it doesn't appear to be necessary. The back block does try to twist a bit, when the retainer is opened with one hand. I think I need to make it a bit longer and wider than the battens and cut a U-shape in the end, so that the "horns" of the U overlap the battens and the clamp. That would prevent it from rotating. Also note that the depth of the retainer is controlled by the length of the skewer. These come in different lengths, but usually in sets with one long (rear hub) and one short (front hub.). As it happens, the shorter ones would fit the top shelf better. IDK if the top shelf needs retainers, but maybe I'll find another pair, so that I can have long blocks on the bottom and short blocks on top. Maybe just an OCD thing... Maybe this is all over-thinking things, but it kept me busy on a rainy Sunday afternoon.

Hmm only one more picture allowed... Maybe a look to the future. I had originally thought to continue this pattern of cabinet/shelf/cabinet back into the quarter berth, where the ledge becomes much deeper and a bit taller. But now I think that I favor all open shelves or bins back there. Preferably on some kind of adjustable framework. The ledge becomes wide enough for full-sized duffel bags or backpacks. Or a lot of books. Or whatever. I just need some mechanism to hold those things in place. (Goes without saying, I think, that this is all above the waterline, so nothing heavy should go up high.) But maybe I'll have different thoughts in the dead of winter. 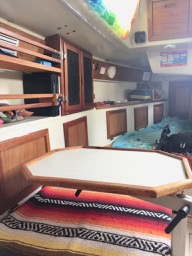 A couple more details are visible there. First, I've put up purpose-made channels with diffusers for the LED strip lighting. (Someone else recently blogged about those...?) Before, I had screwed up mahogany battens in front of the LEDs to try to deflect the direct rays, but these things from Ebay or Amazon look and work better. And are probably actually cheaper. Probably I should have replaced the old LEDs themselves, since they are only 24-inches long each (See second photo), but I paid a lot of money for them, a few years ago. Newer, cheaper strips could cover the entire length of the boat in a continuous sweep. Second, the "duct" at the hull-to-deck joint is now actually acting as the HVAC duct for the Webasto heat pump. So there may be some conflict between the AC vents and the shelving. Oh well. Nothing's perfect.

Sorry if weird things seemed to happen to this post - I had a little problem with the editor.
Reactions: Sean Engle
About author

I love the bike skewer solution! Please keep these posts coming. Our Olson is laid out somewhat similar to your E29 and we have similar issues with a lack of storage. You keep making modifications to your boat that I want to make to ours.
Nice work!

Love the bike hub clamp - very good idea.
You must log in or register to reply here.